BY DAVID FISHER
david@dresdenenterprise.com
WEAKLEY COUNTY (May 3) — Powerful winds, generated by a strong thunderstorm that moved through Northwest Tennessee Sunday afternoon caused significant property damage, knocked down trees and power lines and left several thousand area residents without power. In a one-two punch, a second storm ripped through the region Monday night causing additional damage.
According to Weakley County Emergency Management Director Ray Wiggington, approximately a dozen houses were reported to have been damaged in the wake of the storm system.
“We checked out half of the homes on Sunday, and we expect a few more reports to come in,” Wiggington said. “It looks like three of the houses are likely to be a total loss, while eight have significant damage but are repairable.” He stated the three totaled homes are in the southeastern part of the county. They are located on: Mt. Zion Road near Gleason, Old State Route 22 near McKenzie and Melrose Street in Greenfield.
“We also had a lot of trees blocking roadways,” he said. “That’s one thing that slowed down my damage assessment.”
The Weakley County Municipal Electric System reports that approximately 9,000 of Weakley County’s 21,000 customers were left without power Sunday afternoon and most of the night.
Another storm system moved through the region Monday night causing additional damage.
As of Tuesday morning, local residents were still without electric service, and WCMES crews were troubleshooting and repairing power lines damaged by thunderstorms on Sunday and Monday.
Weakley County Highway Department General Foreman Jeff Cosby said, “It got pretty rough Sunday night. We had a lot of big trees down.” He stated a total of 53 trees blocked roads all over Weakley County.
Cosby reports trees fell across roads near Dresden, Gleason, Martin, Palmersville, Sharon, Sidonia and in other rural areas. He noted trees also damaged electric lines countywide.
“We had crews out all over the county last night and got back in at approximately 4:30 a.m. this morning,” he said. Cosby stated some of the roads hard hit by the high winds included: Ralston, Three Point, Capps, Stafford Store, Shades Bridge, Blackburn, East Grove, Parrott, and numerous other county roads.
“We have all of the roads opened back up, but we’re still doing some cleanup,” Cosby said. 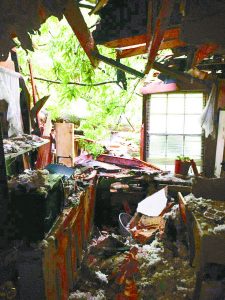 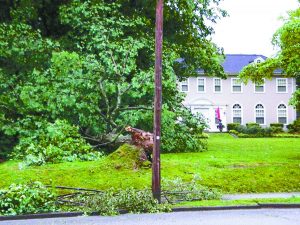 A large tree was toppled in front of the home of the late Ned McWherter. 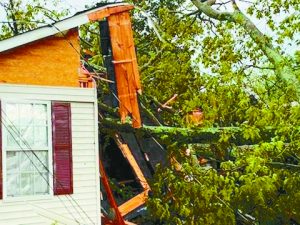 Storm damage on Melrose in Greenfield.