MARTIN — Students, faculty and staff have, for the most part, left campus as the COVID-19 crisis continues to disrupt the University of Tennessee at Martin’s normal spring semester routine. However, one resource that the UT Martin community has consistently depended upon to deliver news is still producing news daily, just in a new location.
WUTM FM 90.3 “The Hawk,” student radio station programmed from Gooch Hall, has continued to air news and entertaining programs even though its employees now have restricted access to working in the station. These student journalists are facing new obstacles every day and are learning to overcome them using creative measures. While working from home, News Director Kayla Brooks, of Dickson, who believes disseminating current news is just as important now as ever, has resorted to producing newscasts from the most acoustically-sound space in her home: the bathtub.
“I am having to write my own broadcast stories, … going into my bathroom, closing the door, sealing myself into the bathtub as acoustically as possible and recording it on my phone, then sending it to my computer, editing it, and sending it to our engineer (Brian Thomas),” Brooks said. “Then he is having to do all of this work to make it sound good because it was from my bathtub and then putting it on air.”
Brooks says while the process is unlike any she ever expected to experience as a journalist or even a student-journalist, she appreciates the opportunity to cover such an important event in history. The ability to be flexible, even if that means producing a newscast from her bathroom, is a lesson she knows she will take with her as she pursues her communications career after graduation.
“I didn’t come into working at the radio station thinking, ‘oh wow, I’m definitely going to get to cover a pandemic,’ because that’s not how your brain works; that’s not what you expect. It’s a much more serious situation that I have this not only responsibility but privilege to cover,” Brooks said.
-“It is a privilege because getting news to a group of people who need reassurance and need that confidence (is) really important.”
Dr. Richard Robinson, faculty adviser of WUTM FM 90.3 “The Hawk” and communications professor, believes the crisis is a real-life teaching moment for all student-journalists at UT Martin, a thought Rodney Freed shares.
“While this is awful, and it is, it’s still great training for students,” said Robinson. “They are getting the same experience, at least to some degree, of these professional journalists.”
“(The pandemic has taught) students (how) to work under not the most favorable conditions, when you don’t have all of your tools right in front of you and still have to figure out how to make those things work with the tools that (you) have now to still be able to put a product together,” Freed, director of the broadcast sequence, said. “That’s been a challenge for everyone in the media, not just us.”
While the radio station is capable of operating autonomously, Freed says the FCC licensed station is not just a “jukebox,” and what differentiates its status as such is the continuance of newscasts produced by Brooks.
“We’re more than just a music station. We try to serve the community in more ways than just playing music,” Freed said. “I think it’s important for us to constantly evaluate our programming and see what we can do to help others and to pass along information that we have. It is part of our responsibility as a licensed station to do that.”
While Brooks is responsible for writing and producing newscasts for “The Hawk,” she, Robinson, and Freed all said it is because of the station’s senior broadcast engineer, Brian Thomas, that the station is running as well as it is. Thomas is responsible for maintaining the transmitter, keeping all programming on-air and to make sure the automation is working no matter what time of the day it is.
The biggest challenge the staff has faced so far is not being able to physically be in the radio station to operate as effectively as possible. They have learned how to work from home, albeit producing programs in an untraditional way, while relying on Thomas to take care of the technical work that comes with airing.
Thomas, who has spent 20 years working in commercial broadcasting and only a year working at WUTM, is incorporating new ways to improve on-air programs for “The Hawk” and believes a challenge such as not having access to the radio station itself is not a big enough obstacle to stop the station from serving the community.
“I get a little more involved with the students when it comes to live programs because they … don’t always have the facilities to do it so that’s why I step in and help them out too. We keep our programming going and our mission going even though we can’t be in the building,” said Thomas.
According to WUTM FM 90.3 “The Hawk’s” mission statement, the radio station’s purpose is to
“train students at The University of Tennessee at Martin in the field of radio broadcasting while serving the public in both the academic and outlying communities.” The journalists working at “The Hawk” during this time, while still students, are dedicated to producing informative, ethical programs to benefit the community, just as other professional radio stations are doing.
“We are dedicated to getting information that needs to be heard out. We have the same capabilities as anyone else to continue disseminating truth and objective stories … to an audience that needs it,” Brooks said. “We have the same dedication as those professional journalists who are out there and they finished school. I think whenever we come back, we will be a lot more confident in what we can offer.”
For more information about WUTM FM 90.3 “The Hawk” or to tune in, visit wutmradio.com.
“The Hawk,” interviewed Martin Mayor Randy Brundige during the 2019 College Radio Day. 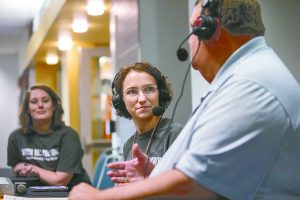