MARTIN — University of Tennessee at Martin football standout Jaylon Moore has agreed to terms on an undrafted free agent contract with the Baltimore Ravens following the conclusion of the 2020 NFL Draft.
Moore, a 6-2, 190-pound wide receiver from Memphis, spent the past four seasons at UT Martin, where he was a preseason all-conference pick by both The CFB Network and Phi Steele in 2019. Despite having his season interrupted by injury, he accumulated 16 receptions for 292 yards and five touchdowns as a senior. His best game came against nationally-ranked Austin Peay, where he returned from injury to tally five receptions for 87 yards and three touchdowns.
During his tenure at UT Martin, Moore tallied 92 receptions for 1,492 yards while his 18 career touchdowns rank third in program history. Additionally, he averaged 16.2 yards per reception. His breakout campaign came during his junior season in which he tallied 52 receptions for 799 yards and eight touchdowns. In addition to his football career, he was also a member of the UT Martin track and field program as a sprinter. 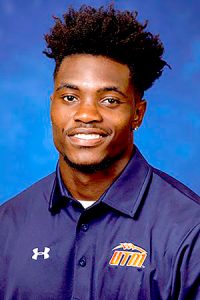