UNION CITY — Local businessman, law enforcement veteran and community leader, John McMahan officially announced his campaign for election to the Tennessee State House in District 76. McMahan believes his experience in both the private and public sectors enables him to be a leader in the state legislature from day one. McMahan served as chairman of the Obion County Republicans and was also county captain for the Trump for Presidential campaign. A staunch conservative, McMahan is guided by his faith and his personal belief of helping those in need.
A fifth-generation West Tennessean, McMahan’s philosophy, “Help your neighbor, defend our Constitutional freedoms, and protect our traditional West Tennessee family values.”
John co-owns and operates a commercial information technology company in Weakley County. Fifteen years ago, John was the founder of The Mobile PC Guys after leaving an extensive career in law enforcement. The Mobile PC Guys have become the regions largest information technology company providing networking, computer maintenance, telephone systems, and fiber internet service in both the West Tennessee and Western Kentucky region. The Mobile PC Guys have received multiple local and state awards including Weakley County’s 2019 Business of the Year.
McMahan’s priorities as a state representative will focus on protecting farmers from unnecessary regulations hampering productivity, investing wisely in education empowering teachers, parents and students, giving small business tax breaks and more incentives to thrive, making sure we receive our fair share of road and infrastructure money, stamping out opioid and drug abuse, stopping illegal immigration, fully funding the I-69 project and promoting President Trump’s family-first agenda.
McMahan is pro-life, pro-family, pro-small business and is a staunch supporter of the Second Amendment. John is a member of both the National Rifle Association and the Tennessee Firearm Association and serves as an NRA firearms instructor.
McMahan has an extensive career in law enforcement with over 20 years serving the communities of Obion County, Henderson County, and the city of Medina. McMahan held numerous positions including patrolman, deputy sheriff, sergeant, captain, detective, and assistant chief of police. For his efforts, McMahan received the Law Enforcement Medal of Valor Purple Heart and was honored to receive a distinguished citation from Tennessee’s governor for investigating and shutting down a multi-county drug ring.
McMahan has also served his community in numerous philanthropic causes and is a member of the Weakley County Chamber of Commerce, an Extra Class Radio Amateur radio operator, a member of the Civil Air Patrol and is a Master Mason, Mt. Vernon Lodge #159 in Sharon, Tennessee.
John and his wife, Christina have three daughters and five grandchildren. They are a certified foster family and enjoy helping children in need and are currently in the process of adopting a 10-year-old boy. John and his family attend Grace Community Church in Martin. He also had the honor to serve as a Missionary to Haiti. For more information visit us at www.johnfor76.com – paid political announcement, paid by the candidate. 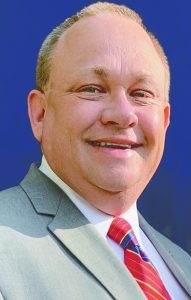