BY DAVID FISHER
david@dresdenenterprise.com
MARTIN (April 21) — Martin firefighters were dispatched to the scene of a fire reported at a local apartment complex late Monday night.
According to Martin Fire Chief Jamie Summers, a fire call was received at approximately 10:40 p.m., regarding a blaze that broke out at Olive Street Apartments, located at 308 Olive Street, Apt. A4, which is owned by Valero Agular, and was occupied by six renters.
Martin Fire Department responded to battle the blaze with six pieces of equipment and 18 personnel.
Fortunately, all occupants exited the structure safely and were standing outside when firefighters arrived.
Firefighters observed that heavy flames were showing from the rear of the structure, and the back door and rear exterior wall of the two-story, wood-frame apartment complex were burning. Additionally, the fire had already extended into the first and second stories of the apartment.
A couple of two-man crews advanced into the front-center apartment and began attacking the fire.
Once the blaze was brought under control, the firefighters began salvage and overhaul operations, which were completed with no fire danger present.
It is estimated that 3,000 gallons of water was used to douse the blaze.
Weakley County EMS personnel and Martin Police Department officers helped work the scene during the emergency.
After operations were terminated, all units returned to Station 1 and were placed back into service.
Crews returned to the fire scene later to check the area, but no fire danger was found.
Total losses are estimated at $115,150.
Chief Summers says the cause of the fire is undetermined at this time.
The American Red Cross was notified and the process of obtaining assistance for the residents of the apartment complex was initiated. 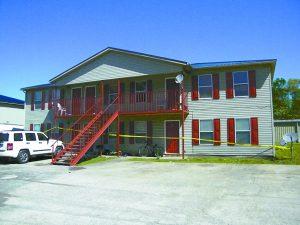 Two housing units at Olive Street Apartments in Martin received extensive damage after a fire ignited inside the structure. Although not visible from the exterior, the damage to the interior was substantial.