GREENFIELD (April 15) — Reigning Class A Miss Basketball Chloe Moore-McNeil will continue her playing career at Indiana University. The senior Lady Yellowjacket was celebrated with a signing ceremony Wednesday, held in front of the Greenfield High School gymnasium with special social distancing precautions.
The event was live-streamed on Facebook, with more than 200 fans tuning in.
The Indiana Hoosier fight song played to kick off the stream, then Head Coach Willie Trevathan welcomed everyone in attendance and watching from home.
Paul Tinkle of WCMT served as emcee. He acknowledged the strange circumstances and that Chloe may not get to walk onto the Indiana campus until August. He noted that the Lady Yellowjackets were the only undefeated team in the state (34-0) when play was halted.
He lauded Chloe for being ranked fifth in her graduating class to go along with her athletic accomplishments. She scored 700 points this season and 2,600 in her high school career.
Chloe is a two-time Class A Miss Basketball and a three-time finalist. In her career, she has averaged 21 points per game while playing just 21 minutes per game. She has 500 assists and 350 steals. She shot 39 percent on three-pointers, 66 percent from two-point range and 86 percent from the free-throw line.
Trevathan said, “I don’t have to tell you all how great a basketball player she is, but she’s one of the best teammates I’ve ever coached. She’s so well-respected and loved in the locker room.”
Chloe’s father, Ontario McNeil, thanked the community and said, “I want everybody to know she’s even better as a person than as a basketball player.”
Chloe then spoke, thanking all of her supporters. She said that she chose Indiana because the team is well-coached and that the school is a great place for her to pursue a career in nursing of health sciences.
She was then treated to a parade of cars adorned with signs and full of fans cheering, waving and honking.
The event ended with a prayer by Tinkle. 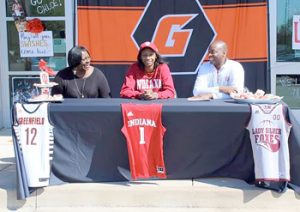 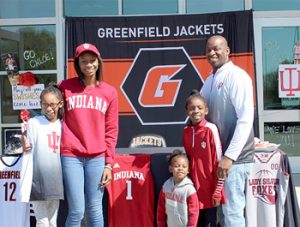 Chloe Moore-McNeil celebrates the signing with her sisters (from left) Kylee, O’Dalis and Orin McNeil and father Ontario McNeil.