MARTIN — University of Tennessee at Martin men’s basketball star Parker Stewart submitted his paperwork as an early entrant into the 2020 NBA Draft. Under NCAA rules adopted in 2018, Stewart can sign with a certified agent, receive feedback and still have the ability to return to school if he chooses.
The 2020 NBA Draft Combine is May 21-24 in Chicago, Ill. All early entrants have until June 15 to choose to officially stay or withdraw from the draft pool. The 2020 NBA Draft is June 25 at the Barclays Center in New York.
Stewart began his collegiate career at the University of Pittsburgh, where he played his freshman season in 2017-18. He transferred to UT Martin, where he was reunited with his father – Skyhawk head coach Anthony Stewart – and sat out the 2018-19 season because of NCAA transfer rules.
Earning his bachelor’s degree from UT Martin in the summer of 2019, Stewart recently completed his redshirt sophomore season as a Skyhawk. The 6-5, 200-pound guard was the only NCAA Division I player to average at least 19.0 points, 4.5 rebounds, 3.5 assists and 2.5 three-point field goals made per contest last season.
Stewart earned All-Ohio Valley Conference second team and All-Newcomer accolades as well as a spot on the National Association of Basketball Coaches All-District 18 second team. He led the OVC with 2.8 three-point field goals per game and also ranked third in scoring (19.2 points per game), seventh in assists (3.8 per game) and tenth in free throw percentage (.766). He also added 4.6 rebounds per outing and converted 34.8 percent of his three-point field goal attempts. 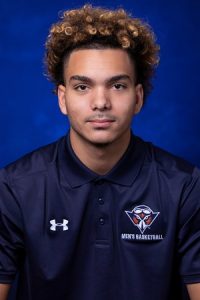