DRESDEN (March 31) —A recent burglary that occurred on Concord Road in Weakley County was solved after some of the stolen items were listed for sale on an internet website.
Dylan Ray McAlpin, 31, who resides at 202 Southfield Drive in Dresden, is charged with aggravated burglary, theft of property over $2,500, and vandalism.
At approximately 9:15 a.m. on March 23, Weakley County Sheriff’s Investigator James Sanders, along with Captain Terry McDade, went to Southfield Drive, Apt. B, after seeing items listed on Facebook that were reported stolen.
When the officers arrived at the address, which was occupied by McAlpin and Jeaneane Stout, Ms. Stout stated the officers could come in and speak with her. At that time, Stout and McAlpin were read their rights. McAlpin then confessed to committing the burglary, theft and vandalism that took place on Concord Road.
McAlpin gathered most of the stolen items but stated that he did not take the rest of the items. McAlpin was placed under arrest on the above-mentioned charges.
McAlpin’s preliminary hearing is scheduled for June 3, 2020, and his bond is set at $5,000. 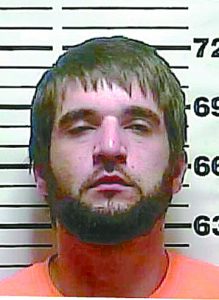