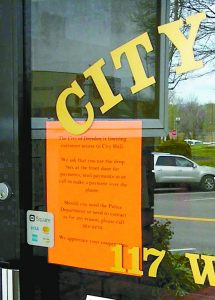 The sign on the door of Dresden City Hall, stating the lobby is closed to walk-in service, is typical of other county and municipal buildings. City business is now being handled by phone, email, fax, internet or by using the drop box to drop off payments.