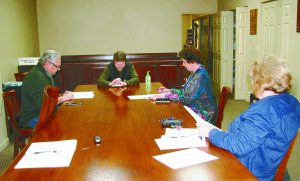 BY DAVID FISHER
david@dresdenenterprise.com
DRESDEN (March 17) — Attendance was necessarily slack during the March 17 meeting of the Weakley County Chamber of Commerce Board of Directors. The small turnout of members was in response to health officials warning the public to limit the number of people in gatherings to 10 or less.
In addition to Executive Chamber Director Barbara Virgin and Administrative Assistant Marguriet Frazier, there were three board members physically present – Chamber Director Hal Bynum, Chamber President Ty Smithson, and Gleason Mayor Diana Poole. Other members signed proxies filed with the executive director or the executive committee prior to the meeting, totaling 50 percent of the 32 member Board, which is required to constitute a quorum.
The minutes of the previous meeting, along with the financials and other items on the agenda was sent to all board members in advance, so they would have the information necessary to decide how to vote through their proxies.
One of the top items the board acted on was the appointment of members representing the various municipalities. These members are elected to three-year terms, and if they choose to do so, they may run for a second three-year term.
Membership election results are as follows: Dresden: Brad Branscum; Gleason: Molly Hannah Wilson; Greenfield: Ty Smithson; Martin: Cory Davis, President-Elect; and Sharon: Maria Lackey.
Outgoing members whose terms expire in 2020 are: Dresden: Tiffany Browning (First Term); Gleason: Jeffery Hames (First Term); Greenfield: Ty Smithson – President (First Term); Martin: Dee Pritchett (Second Term); and Sharon: Maria Lackey (first term).
Executive Chamber Director Barbara Virgin reported Kenneth (KB) Bell, owner of American Roofing Softwash, located at 820 North Lindell Street in Martin, is the newest Chamber member.
The Chamber Board of Directors also approved the financial records, which indicate from July 2019 to February 2020 revenues amounted to $89,506.85. This is $4,103.61 less than the $93,610.46 budgeted for fiscal year 2019-2020. Expenses totaled $74,946.05, which is $2,261.82 less than the estimated expenditures of $77,207.87. However, there are still four months in the current fiscal year for additional revenue to be generated and expenditures to be paid out.
Board members also discussed which upcoming events have been canceled or rescheduled due to health concerns regarding the coronavirus.
According to Executive Director Virgin, the list of activities is constantly changing. “Once everything is scheduled and confirmed, and I have sent out emails, 24 hours later, everything has changed, and I have to start all over again,” She said.
“We’re just going to have to be positive. We live in the best country in the world. If anybody is going to solve the problem, it’s going to be us. We’re going to have to stick together and work together to get it done.”
Canceled and Rescheduled Chamber Events
Due to recent health concerns in our country, the following Weakley County Chamber Events have been rescheduled:
* First Community Bank of the Heartland Grand Opening / Ribbon Cutting — Postponed; Date To Be Announced
* Re/Max Solutions Grand Opening / Ribbon Cutting — Postponed; Date To Be Announced
* Skyhawk Nutrition Grand Opening / Ribbon Cutting – Rescheduled for June 5th at 10 a.m.
* Dragonfly Studio Grand Opening / Ribbon Cutting — Rescheduled for July 14th at 8:30 a.m.
* Carl Perkins Center Business After Hours — Postponed; Date To Be Announced
* Chamber Awards Banquet — Canceled for 2020; next year’s Banquet date will be April 20, 2021
* Leadership Graduation — Due to the cancellation of the 2020 Chamber Awards Banquet, First Community Bank Youth Leadership Weakley County and Leadership Weakley County Graduation ceremony will be Thursday, June 11th, at 5:00 pm at UT Martin Watkins Auditorium, University Center, Martin, TN.
“We will let you know as soon as new dates are set for To Be Announced events,” Virgin said.
For more information, contact the Weakley County Chamber of Commerce at (731) 364-3787; Fax (731) 364-2099; or check out their calendar of events at: http://www.weakleycountychamber.com/calendar-of-events.html