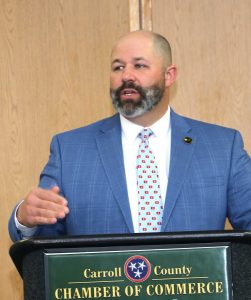 BY DAVID FISHER
david@dresdenenterprise.com
DRESDEN (March 24) — Andrew “Andy” Holt (R-Dresden), who represents the 76th District in the Tennessee State House of Representatives, announced he is not seeking another term of office in the state legislature after 10 years of service.
Shortly after Holt’s announcement, several candidates picked up petitions for the post.
Although Holt picked up a petition on February 3, he has not filed it to qualify to be on the August 6 Primary ballot.
After serving five two-year terms in the State House, Holt, who represents the voters of Weakley, Carroll and a portion of Obion County, announced he decided not to run for re-election.
He made the announcement on his Facebook page on Wednesday, March 18.
Holt explained to his constituents he never intended to be a career politician and after 10 years in office, he decided to step aside.
The 38-year-old state representative said he will leave office after the November General Election.
Holt’s departure leaves the race open for those seeking his vacated post. As of press time, eight candidates have shown interest to enter the race for the 76th District in the Tennessee State House of Representatives. It includes five Republicans, one Democrat and two Independents.
Republican candidates are – Dennis J. Doster, Larry L. Gallimore, David Hawks, and Leon Ronald Huestis – all of Weakley County, and Keith Priestley of McKenzie. The lone Democrat on the ticket is Jean A. Little. Independent candidates are Dresden Mayor Jeffery T. Washburn and Rachel Denise Whites. As of Monday noon, Doster, David Hawks are the two who have filed their petition to be on the ballot. The others’ petitions are still outstanding.
Those interested in running for office have until April 2 to file their petitions with the Election Commission. More candidates might decide to enter the race for District 76 State Representative.
Those seeking the Tennessee State Senate 24th District seat are: Republican candidates – Casey L. Hood (from Obion County) and incumbent John D. Stevens of Huntingdon; Independent Yahweh Yahweh (from Gibson County); and Democratic candidate former Paris Mayor Samual Tharpe (Henry County).
Those running for Weakley County offices include Seth Coleman and Steven J. Totty, who are seeking the District 5 Commission seat (unexpired term).
In the District 7 Commission race (unexpired term), Republican candidate Mary Beth VanCleave will face against Whitney W. Stover, who has filed as an Independent.
In the contest for Assessor of Property, incumbent David A. Tuck remains unchallenged.
The sole person running for the District 1 Constable’s seat (unexpired term) is Republican candidate Steven Lynn Todd.
The five Weakley County School Board positions up for election (odd numbered districts) are so far unchallenged, with the following incumbent members seeking re-election: District 1 – Gath W. Meeks; District 3 – Jeffrey Lynn Floyd; District 5 – Kimberly B. Longacre; District 7 – Steven D Sims; and District 9 – Joshua Thomas Moore. By law, all school board members must file as Independents.
Those Republican and Democratic candidates, receiving their party’s nomination in the August 6 Primary will face off against Independent candidates running for their respective positions in the November 3, 2020 State and Federal General Election. Independent candidates are not required to win a primary to be on the November 3 ballot.
Candidates have until noon Thursday, April 9, 2020 to withdraw their candidacy; otherwise, their names will remain on the August 6 primary ballot.
The voter registration deadline for the August 6 Primary Election is Tuesday, July 7, 2020. Early voting will take place from Friday, July 17 until Saturday, August 1, 2020. And the absentee ballot request deadline is Thursday, July 30, 2020.