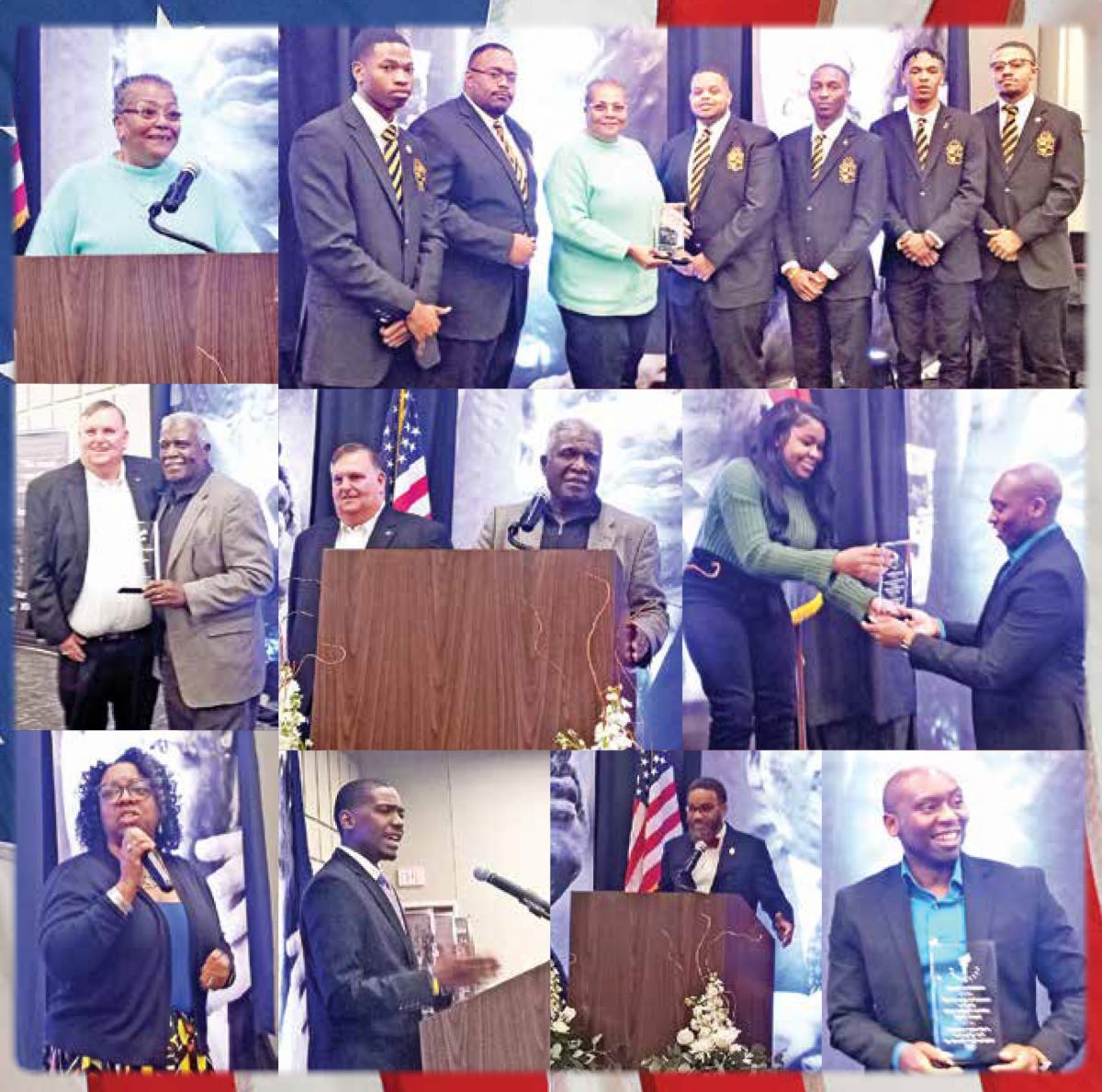 The City of Martin, University of Tennessee at Martin and UTM Black Student Association hosted the 11th annual “Celebration … Dream with a Vision, Live with a Purpose” event which remembers the legacy of civil rights leader Dr. Martin Luther King Jr. and pays tribute to members of the community who work to make a difference. This event was held in the Martin Event Center on Monday. University of Tennessee at Martin mechanical engineering student Justice Watkins. Watkins shared King’s history and reminded the audience that while Dr. King may have been one of the most disliked men in the nation during the Civil Rights era, he led with conviction and triumphed despite the costs.
Dr. Logan Hampton, the 10th president of Lane College in Jackson was another guest speaker. Hampton told the audience the price of racism, bigotry and prejudice is expensive. He commended the crowd gathered at the Martin Event Center for its diversity and willingness to come together as it was in reflection of Dr. King’s dream to make real the promises of democracy.
Joyce Washington of Martin was the recipient of this year’s Alpha Award. Kameron Echols, award presenter, explained Dr. King was a member of Alpha Phi Alpha fraternity that is focused on service and the development of leaders. Echols described Washington as fearless in her pursuit of elevating the community by encouraging uncomfortable conversations and providing a safe space for those conversations. Washington said “she is just a big ol’ country girl from Northwest Tennessee who God planted here” and her role and purpose are to plant seeds in the community. She is pictured with members of UTM’s Alpha Phi Alpha fraternity.
UT Martin Black Student Association president Nia Tate presented Demetrius Robinson with the Torch Award. Tate described Robinson as inspiring and encouraging. Robinson is a co-advisor of UTM’s BSA. The annual event is sponsored by the City of Martin, University of Tennessee at Martin and UTM’s Black Student Association.
The Harold Conner Award is given to an individual who works to strengthen the community through service and sacrifice. The late Rev. Harold Conner was a Martin man who inspired others and left a legacy of engaging one another and working together for a better neighborhood. Martin Mayor Randy Brudige presented the Harold Conner Award to Johnny Shanklin for his service on Monday.
UT Martin Department of Music administrative associate Mykia Campbell, along with local optometrist Dr. Danny Donelson, provided musical entertainment. Campbell and Donelson had the audience clapping and singing to their rendition of Marvin Gaye’s song, “What’s Going On.” All Photos by Sabrina Bates/Magic Valley Publishing

University of Tennessee at Martin student Justice Watkins and Lane College president Dr. Logan Hampton were keynote speakers for the annual Martin Luther King Jr. Celebration and Breakfast on Monday, Jan. 16, in the Martin Event Center. The 9 a.m. celebration and breakfast was sponsored by the city of Martin, UT Martin and the university’s Black Student Association.

Watkins, a mechanical engineering student from Memphis, talked about King’s many personal accomplishments and sacrifices that led to his critical role in the civil rights movement. “Today, we gather to celebrate the life of a man, a man who though he never met us, has left an indelible mark on our lives, a man who fought for justice, no matter the cost. … Dr. Martin Luther King Jr. was a man of great courage and conviction who accepted the responsibilities of an organizer and leader with unwavering dedication,” he said.

Watkins spoke about the need to appreciate the slain civil rights leader and all who have sacrificed for freedom and justice. “To truly appreciate something, you much understand both the victory and the cost it took to obtain victory,” he told the audience. “Dr. Martin Luther King was arrested more than 29 times, and despite all the accomplishments, he still had many within his own community question his character and his true motives.” Watkins noted that King and his family suffered and sacrificed repeatedly for freedoms that King nor his predecessors would ever enjoy.

“So, to Dr. Martin Luther King we say, ‘Thank you, we appreciate you. Thank you for your work, thank you for your efforts, and thank you for your sacrifices. You stood strong despite all you faced, so we cherish you with the very freedom we fought for, and we stand strong still in hopes of being cherished the same,’” Watkins said.

Hampton, the 10th president of Lane College, followed Watkins by also remembering all who sacrificed to build this state and nation. “When we look around this room this morning, we look around this city, we look around UT Martin, we see in you the fulfillment of the dreams and the hopes of our slave foreparents,” he said, recognizing the accomplished persons of color seated at his own table who have achieved major success and responsibility through hard work.

Hampton then directed his comments to students in the audience and reminded them that they, too, can achieve success but only through the kind of effort that made others around them successful. “Scholars, I encourage you to put in the work. I see your dreams pulling up. You are made for this. You are made for greatness … and God has made a way for you,” he said. Hampton then addressed the entire audience saying, “Today, this Dr. Martin Luther King Jr. observance challenges you to dream with a vision and live with a purpose.” He said that people from the past would be pleased to see an event bringing together people of different races and backgrounds to celebrate and remember those who sacrificed for freedom.

While celebrating and remembering those who sacrificed, Hampton reminded the audience that much work remains to be done. “On this King holiday, as we celebrate civil rights heroes, we need to remember the high cost of bigotry, divorce ourselves of our biases, challenge our prejudices, and eliminate the possibility of racism in our lives,” he said. “Racism is expensive. Prejudice is expensive. Bigotry is expensive. … We need to remember anew that God made each of us, and God has a purpose for each of us.”

Hampton added that in this country “divergent opinions, different perspectives and diverse voices are necessary and useful.” What isn’t constructive is assigning labels to persons who think differently, so he challenged everyone to engage in conversation. “Instead, on this King Day forward, let’s have the difficult conversations in person. … Walk across the street, walk across the room, walk over to the next cubicle and do something absolutely radical in our day – talk to someone who you disagree with, who has a different opinion.”

He closed by again urging those in the audience to find a way to talk with one another and find common ground. “Friends, we have much work to do, and God has called us for such a time as this,” he said. “Dr. Martin Luther King said in his ‘I Have a Dream Speech,’ he spoke to the fierce urgency of now. … Now is the time to make real the promises of democracy. Now is the time to make justice a reality for all God’s children.”

Joyce Washington, of Martin, received the Alpha Award for her community involvement, which is presented in memory of King who was an Alpha Phi Alpha Fraternity Inc. member.

The Torch Award was presented by the Black Student Association to Demetrius Robinson, director of the UT Martin Office of Career Planning and Development, for his work with diversity and inclusion among students.

The City of Martin Harold Conner Award was presented by Martin Mayor Randy Brundige to Martin native Johnny Shanklin for his service to the community.