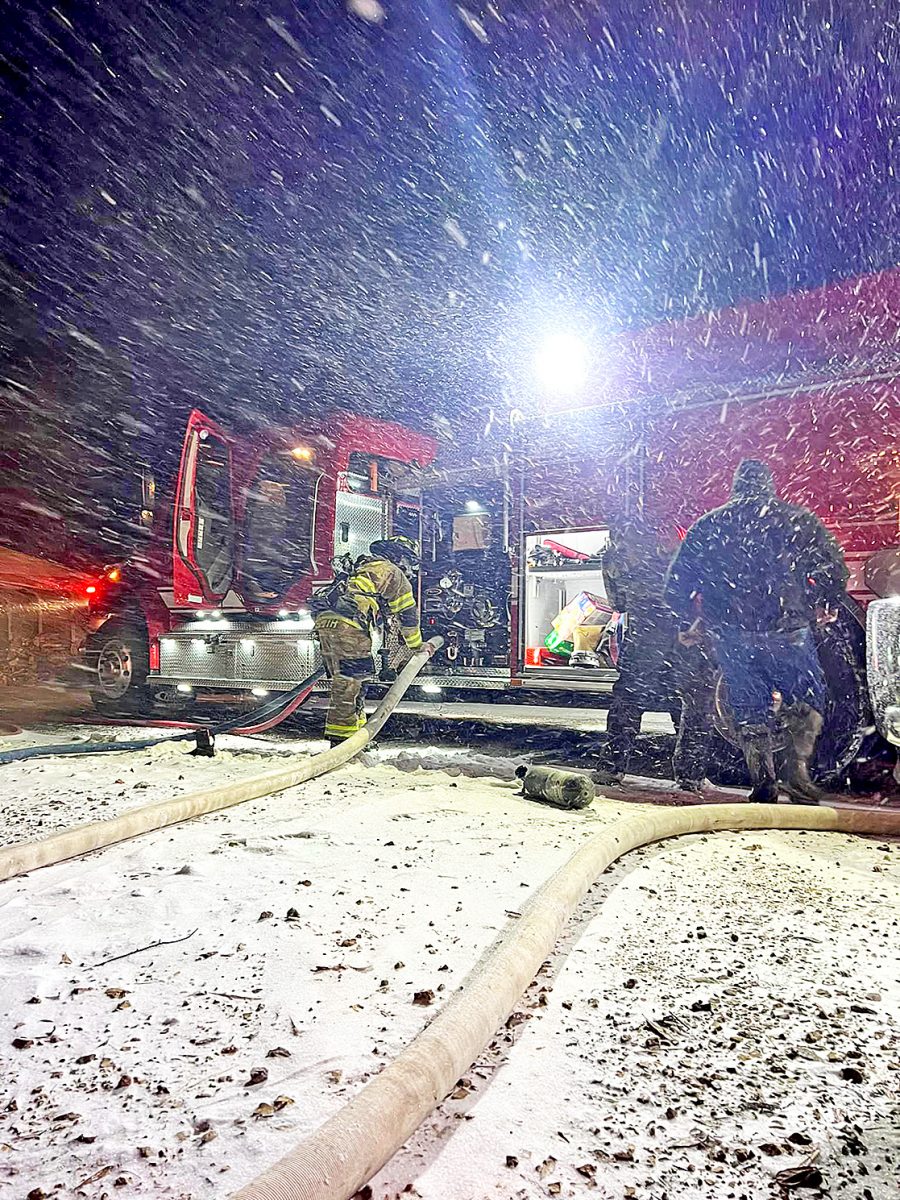 Multiple fire departments responded to a rural fire at the residence of Gary Brayfield located at 4927 Hyndsver Rd., on Monday, Dec. 26, 2022. The blaze caused extensive damage, leaving the family homeless.

During the Christmas holiday week of Dec. 19-30 Dresden Fire Department responded to multiple fires, one fire alarm, one gas leak, one smoke investigation, and one medical emergency.

According to Deputy Fire Chief Kory Green, Dresden firefighters were dispatched to a fire reported at 121 Garland Street at 6:36 p.m. on Thursday, Dec. 29, 2022.

Seven personnel arrived at the scene with three firefighting apparatus.

Firefighters discovered a small fire on the exterior of a single-story residential structure and in the yard next to the structure.

No further fire danger was found. The structure suffered damage to the vinyl siding on the side of the structure.

The residence received an estimated $2,500 in damages.

The fire is believed to have originated outside of the home, but the cause of ignition is unknown.

Multiple fire departments responded to a rural fire at the residence of Gary Brayfield located at 4927 Hyndsver Rd., on Monday, Dec. 26, 2022.

According to Fire Chief Sean Fulcher of the Latham – Dukedom Volunteer F.D., a 911 call was received at 2:53 p.m., and the firefighters responded with 10 firefighters and four fire trucks. He stated Latham F.D. arrived at the residence nine minutes after being alerted and they were pumping water within one minute.

Mutual aid was provided by Palmersville Fire Department, which provided half a dozen personnel and three pieces of equipment; and Martin F.D. responded with three firefighters and a fire truck. Additionally, the Weakley County Sheriff’s Department provided traffic control and Weakley County EMS was available to provide medical support, if needed.

Chief Fulcher stated Hwy. 118 was clear, but road conditions were hazardous on Hyndsver Rd., which was covered in a sheet of ice.

“When we arrived on the scene, there was smoke coming out both eaves of the house and from the basement area,” Chief Fulcher said.

The fire was concentrated in an addition to the dwelling, which was a garage that was converted into a living area.

In order to gain access to the flames, some of the bricks on the front of the house had to be knocked down. Additionally, the drywall and ceiling in the building addition were torn out in places, so firefighters could extinguish the blaze.

“We had a good knock down on it and the house is still salvageable,” Chief Fulcher said. “The outside of the front of the house sustained the worst damage. The house is currently not livable, due to smoke and water damage, but it’s fixable.”

The single-story brick home was occupied by two elderly individuals and several dogs. All of the occupants, including Brayfield’s wheelchair-bound wife, escaped the burning residence unharmed by the time emergency responders arrived.

Chief Fulcher noted the blaze was ignited by a portable heater.

“Unfortunately, the Brayfields didn’t have any insurance,” Fulcher said.

However, he noted Latham Fire Department’s training officer, Doug Wheaton, who heads Red Cross in Weakley County and the West Tennessee area, is assisting the elderly couple, who remain homeless until repairs can be made to their house.

“I believe the Red Cross is going to get the Brayfields and their dogs a place to stay for a few days,” Chief Fulcher said.

According to Dresden Fire Chief Paul Hutcherson, at 5:07 a.m. on Dec. 23, a barn fire was reported at Colin and LeAnne Johnson and Junior and Winnie Moore’s farm, located on the 4000 block at Paris Hwy. 54.

Chief Hutcherson stated a passing motorist called 911 to report the fire. He noted, the barn was fully involved and the walls were falling down, when firefighters arrived at the scene. Since the structure was beyond saving, their mission was to contain the blaze to keep it from spreading.

Como Fire Department placed the fire under control and DFD returned to Dresden and was back in service.

The cause of the barn fire is thought to have been due to an electrical issue, Chief Hutcherson said.

Dresden firefighters responded to a fire at the home of Mr. and Mrs. Keith Newton, located at 210 Winstead Rd. just off the Latham Hwy. at 7:04 a.m. on Dec. 22.

Dresden Fire Department arrived at the scene with 11 personnel and five firefighting apparatus. Latham provided manpower and water, along with one tanker and one engine. Martin Fire Departments also provided mutual aid.

DFD informed all responding engines that the fire was coming through the roof and that it was a chimney fire.

Three firemen made entry through the front door, and the interior crew was able to knock down the fire. Once the fire was under control inside where the wood stove was located, the Engine 4 crew made entry inside the structure and pulled the metal tin off the wall around the stove to put out hot spots. Firefighters utilized a ladder to get on the roof to cut the roof around the chimney with a chainsaw. Then, they used a fire hose to spray water down the pipe to extinguish the fire that was still visible.

Once the fire was out, Dresden firefighters performed overhaul operations to make sure there were no more hot spots remaining inside the walls and the chimney’s structure.

“We were able to get there pretty quickly in icy and snowy circumstances, and put the fire out near where it originated,” Chief Hutcherson said. “We contained the fire to the room of origin and got a pretty quick knockdown on it.”

Chief Hutcherson stated firefighters worked in an environment where it was icy and snowing with a 45 m.p.h. headwind on the front side of the structure, and he felt it was fortunate the firefighters extinguished the blaze so quickly.

The fire started in the area where the chimney meets the ceiling.

Command was terminated with all Dresden units back in service returning to the city and to quarters.