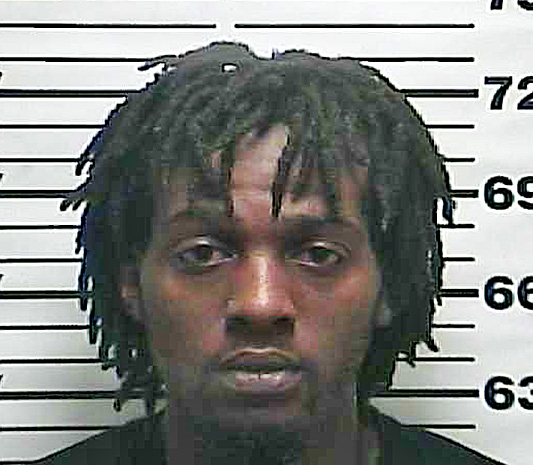 An official report issued by former Greenfield Police Chief Joey Radford, who retired earlier this month, details the events that led up to Assistant Chief Danny Smith discharging his service weapon at a fleeing vehicle in downtown Greenfield.

According to the report, which is based on witness testimony and security camera video evidence, at approximately 4:30 p.m. on Monday, Oct. 17, Dallas Tyrone Davis, 26, of Memphis, appeared in Greenfield City Court on a traffic-related charge. The traffic citation stems from an incident on Sep. 19, when Greenfield officers pulled him over for speeding.

At the time of the traffic stop, the officer retrieved a small bag of Schedule VI (marijuana) and discovered a loaded 9mm firearm inside the suspect’s vehicle. The officer released the suspect and told him to appear in Greenfield traffic court on the speeding charge on Monday, Oct. 17. The officer informed Davis he also had an appearance in Weakley County General Sessions Court at 2 p.m. that same Monday for simple possession of Schedule VI.

However, following the traffic stop, police learned the driver was a convicted felon, who had been found guilty of theft of property in Shelby County during 2015. This resulted in a warrant being issued for Davis’ arrest on the charge of unlawful possession of a weapon (by a convicted felon).

When Davis appeared in Greenfield traffic court on Oct. 17 for the traffic violation, officers attempted to detain him on the arrest warrant. Asst. Chief Smith told Officer Joseph Roth to take Davis into custody and contact a Sheriff’s deputy to transport him to the Weakley County Jail.

As police chased Davis through the courtroom, Officer Roth stumbled and fell to the floor. Patrolman Kathy Whitman was following closely behind Officer Roth. Chief Radford came down the stairs to check on Officer Roth and helped him to get up.

Chief Radford said, “Once he was back on his feet, we all went out the rear door. We then turned the north corner of the building and started running toward Front Street. Officers Roth and Whitman were in front of me, so I turned back to go behind the library in an attempt to cut Davis off if he traveled North. At some point, I heard two shots and a vehicle leaving the area at a high rate of speed. The vehicle traveled north, then turned right onto Garland Street and sped away. I ran back around Front Street and asked what happened?”

Asst. Chief Smith told Chief Radford that he went out the front of the building in an attempt to intercept Davis, and he saw Davis run down the alley and get into the driver’s side of a white SUV. According to Asst. Chief Smith, he saw no one else in the vehicle.

The report states the SUV jumped the curb and headed toward Officer Roth, coming within feet of him on the grass between the curb and the sidewalk.

Asst. Chief Smith stated that Davis drove his vehicle toward Officer Roth and he thought Davis was going to run over him, so he fired two shots at the vehicle’s right-rear tire in an attempt to try and neutralize the threat by stopping the vehicle.

According to the report, Davis continued driving the vehicle down the edge of the sidewalk until he got to the alley, then turned back onto North Front Street, turned right on Garland Street, and fled the area.

Patrolman Whitman stated that she followed Chief Radford and Patrolman Roth out of the building. Officer Whitman said she continued to follow Roth, and saw Davis driving toward him.

Patrolman David Sliger of Greenfield P.D. was called to assist in the investigation and took statements. Both Roth and Whitman said they “had to jump out of the way because they thought Davis was going to run them over.”

Patrolman Sliger said in his statement, according to Greenfield Police Department’s policy, an officer is allowed to fire his or her weapon at a moving vehicle in self-defense of another. Due to the fact that Asst. Chief Smith thought that patrolmen Roth and Whitman were going to be run over, and patrolman Roth and Whitman had to jump out of the way for fear of being struck by the vehicle, the actions of Asst. Chief Smith appear to be justified.

Police attempted to locate the vehicle but were unsuccessful. A BOLO was put out in an attempt to locate the driver of the vehicle, who was now was facing the additional charges of resisting stop, halt and frisk; evading arrest; and aggravated assault on a police officer.

Immediately after the incident, the courtroom was locked down and extra security measures were taken to ensure everyone’s safety. The court went into recess, and it was during that time that the judge instructed Officer Jeff Mathews to address the people in the courtroom about the situation.

During this time, Asst. Chief Smith re-entered the courtroom and reassured those present that everything was okay and there was no need to worry because Davis had already left the area.

The judge also spoke to the court about the situation and gave them an option for their cases to be reset. When the people got ready to leave the courtroom, they were escorted to their vehicles by officers.

Chief Radford said, “I contacted District Attorney Collin Johnson by phone to advise him of the situation that had taken place and to inquire if the TBI needed to be called in for this case.” After talking with Johnson about the case, the DA stated that he was not going to request the TBI to investigate the incident because no one was shot.

Additionally, Mayor McAdams was advised of the situation, after it occurred, and was kept informed during the process.

Chief Radford said, “I then started gathering information/evidence from the scene. Patrolman David Sliger responded to the scene to help with the process. Two .240 caliber shell casings were recovered from the street. Chief Radford and Officer Sliger attempted to locate the fired rounds with a metal detector but were unsuccessful.

A woman parked outside the nearby clinic told investigators she didn’t hear the shots being fired, but she did witness a white SUV traveling at a high rate of speed go behind her on Front Street and turn right onto Garland Street.

On Oct. 18, 2022, Investigator Drew Vernon of the DA’s office, interviewed Asst. Chief Smith about the incident and reviewed the videos.

Due to the exigent circumstances, there was no body camera footage because the officers had no time to turn them on. However, video of the incident was recorded by the police department’s security cameras.

According to DA Investigator Vernon, there was no criminal misconduct by the officers’ actions involving the incident.

On Oct. 19, Davis turned himself in and was booked into the Weakley County Jail on the new charges and is currently free on $10,000 bond. Davis’s court hearing is scheduled for Wednesday, Dec. 28 at 8:30 a.m. Davis is represented by Dresden Attorney Paul Hutcherson.

After a comprehensive review of the incident, a new standard operating procedure was put in place.