So Sunday morning, we found out.

There were those hyper-optimistic folks holding out hope that Tennessee’s overall football resume might secure the Volunteers one of the four coveted spots in the College Football Playoff.

Sadly, for those orange-clad hopefuls, it didn’t happen.

The Vols were ranked No. 6 by the CFP committee, just behind Alabama at No. 5, Ohio State at No. 4, TCU at 3 and Michigan at 2. Georgia, of course, secured the top seed. Being honest, I knew Tennessee cracking the Final Four would be a major stretch. Sure, the fact that Alabama is fifth has wrinkled the brows of some Tennessee fans, given the fact that the Vols won a 52-49 thriller in October over the Crimson Tide.

But the eddies and currents of the college football season are unpredictable and inconsistent, as are the whims of the Committee.

The truth of the matter is this: Tennessee didn’t deserve one of the savored four playoff spots.

All Tennessee had to do was go to Columbia and beat the Gamecocks, who were a three-TD underdog to the Big Orange. Whatever happened on the way to the Palmetto State that week, whether it was a lack of focus, disagreement among the ranks, or just a bad game, the Vols didn’t get it done. In fact, they got boat raced.

The sad thing is that it was there for the taking. If there were some envious parties in the clubhouse not quite as motivated to pull their weight at SC, then shame on them. If true, those guys with the selfish agenda cost their team a spot at basking in the glow of the playoff spotlight, which, in the long run, could have aided in recruiting, donations, publicity and many other intangible things that help buoy a championship program.

Had Tennessee gone down there and won by an extra point, it would be in the Dance. But it didn’t. It had one job.

Is that so bad? Yes and no.

The Vols weren’t even supposed to be so highly regarded yet. Had you told me last year that the Vols would end 2022 ranked about 17 and headed for the Liberty Bowl or some such, I’d have said, “that sounds about right.”

But now, it seems as if Tennessee is headed to the Orange Bowl in Miami to play Clemson. No, it’s not the playoffs, but it is a nice, prestigious January destination, oft reserved for elite programs. For the Vols to be 10-2, given where the program was 23 months ago, is astounding. Sure, there are folks who are going to be a bit chapped that the Vols lagged behind Bama in the rankings, some upset that the playoffs were a no-go this year, but given the renovation project put together by Josh Heupel this year, it seems this program is ahead of schedule.

And for the moment, that should be good enough, considering the wreckage this program had to wade through to get to Miami.

Jim Steele is a correspondent for Magic Valley Publishing and the host of The Pressbox radio show, which airs 4-6 p.m. CT, Monday-Thursday on 95.9 FM, WRJB, Camden, Tenn. 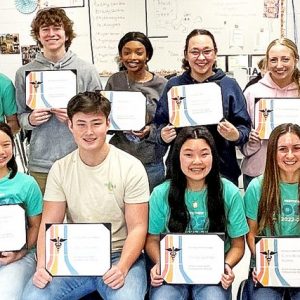 The Beat Goes On Thanks to Donated Instruments at DES

Teachers of the Year Named By Schools and District