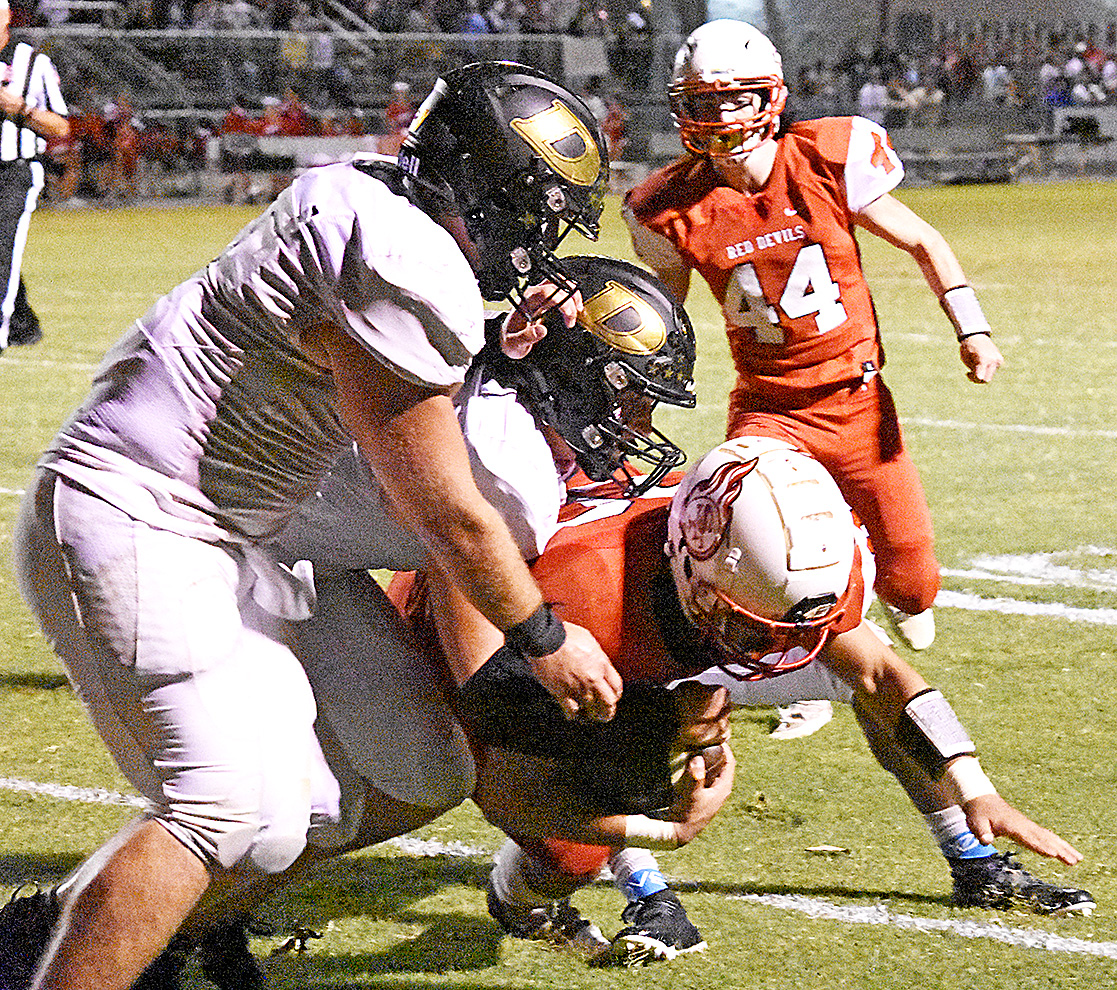 TAKING DOWN A DEVIL – Dresden’s Cameron Schlicht and Will Kibbler take down a Red Devil runner. Photo by Ron Park.

But the Lions will be facing their biggest challenge yet of the season this upcoming Friday night as they host the also undefeated McKenzie Rebels in a big Region 6A showdown.

According to Dresden head coach Keith Hodge, he is getting his team ready for a fight.

“We all know how good of a team McKenzie has,” said Hodge. “We’ll have to have a great week of practice that includes everyone on our roster contributing. As we prepare, we’ll focus on what McKenzie does well and then the areas we want to attack. The main thing for us is being zeroed in on who we are as a unit and playing smart physical football. We need to play good team football for all four quarters and keep our confidence like we have all season.”

The Rebels, who were state runners-up last year, are currently the top ranked team in Class A, while the Lions are number four, though those rankings could certainly change after Friday night.

Regarding the win over South Fulton, Hodge admitted that it wasn’t their best performance of the season with some missed opportunities during the game.

“We did several things really well, and some areas we need to focus in on,” said Hodge. “South Fulton gave us some fits with their passing game that caused us to make some in-game adjustments. Our defense stepped up and put them in a lot of passing situations. Offensively, we were able to put together several good drives and score each time we got into the redzone. Special teams again was really strong for us as Mark [Maddox] went eight for eight [on extra points] and pinned them deep on kickoffs.”

But to their credit, the Red Devils never stopped fighting and scored just ahead of the final buzzer on a 20-yard pass play, ending a three-game shutout streak for the Lions.

Dresden’s Nick Turnbow set the tone for the game when he returned the opening kickoff 72 yards for a touchdown.

Raymond Johnson received for 93 yards and one touchdown, Jaylyn Mitchell caught for 35 yards and one TD, and Turnbow added 42 yards on three receptions.

Mace Wilson racked up six points for the Lions’ defense in the third quarter when he picked up a South Fulton fumble and ran it into the end zone.