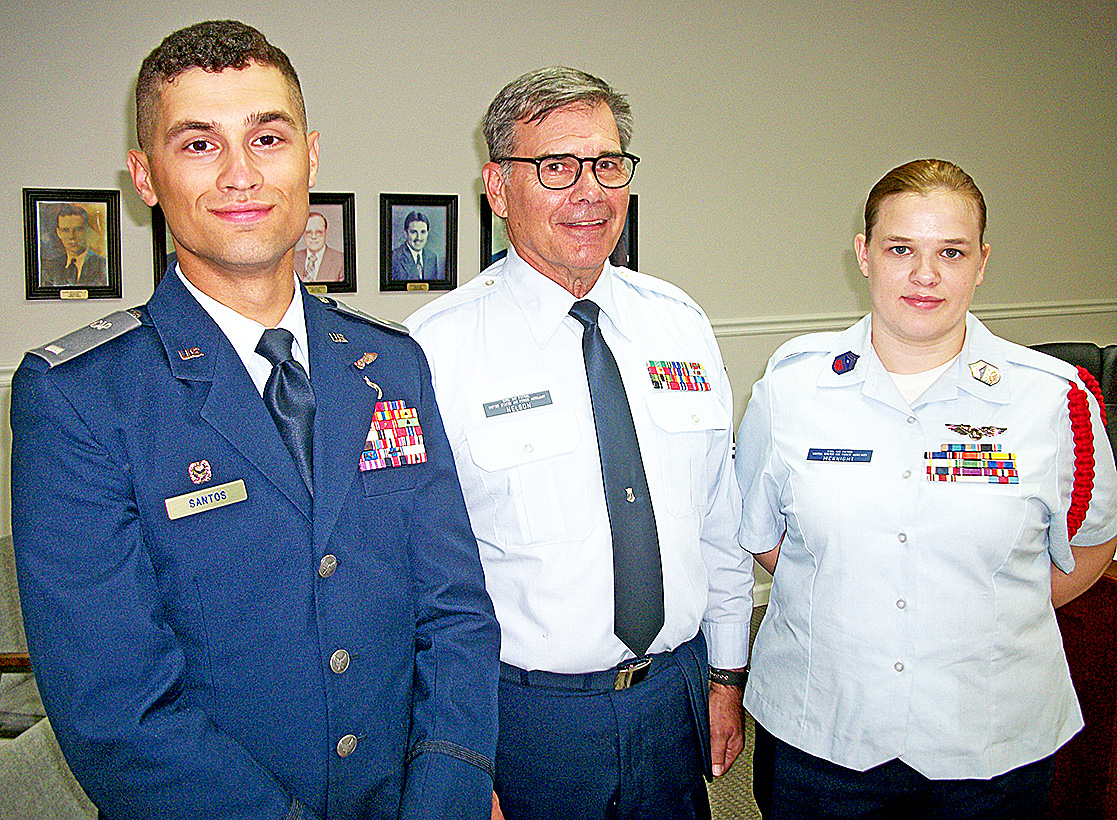 CIVIL AIR PATROL – During Monday night’s meeting of the Gleason Board, Civil Air Patrol (CAP) personnel from the Paris Squadron explained the importance of the organization and the services it provides to the public. These CAP members included 1st Lt. Louis M. Santos; Master Sgt. Steven Nelson, and Cadet Master Sgt. Savannah McKnight.

Mayor Charles Anderson stated the city’s garbage contract with Republic Services expires during March 2023, and representatives from Republic and Rae Kar were present to explain the various options and costs they offer and answer questions from the board.

Jeremy Keith and Gerry Burke of Republic Services stated their company hopes to renew their contract with the City of Gleason for another five years. Burke stated that, in addition to weekly residential and commercial garbage services, Republic currently provides one bulk trash pickup per month.

Mayor Anderson stated there have been problems with broken trash carts caused by the lift arms on the garbage trucks not aligning properly with the carts. Additionally, the mayor said the city needs an additional monthly bulk pickup to prevent trash from piling up and keep the city looking nice.

Burk noted Republic has acquired a new garbage truck and hired a new driver. He explained the lift arms must be properly calibrated to prevent carts from being damaged and the issue will be addressed.

City Attorney Beau Pemberton reminded the board that garbage contracts have a built-in annual increase to allow for cost-of-living expenses. Pemberton said Republic’s proposal calls for a yearly 4.5 percent increase. Over a five-year period, this would amount to a 22.5 percent price hike.

A local business owner complained about trash bins not being picked up at her restaurant in a timely manner. She stressed that overflowing garbage carts is a health code violation and illegal, and the problem must to be resolved.

Legins stated, if his firm receives the garbage contract, a brand new 95-gallon trash container will be placed at each residence.

Legins stated residences and businesses will be identified by serial numbers to make them easier to locate and address any issues that may arise.

He said Rae Kar’s customer services will research any concerns.

Mayor Anderson asked board members to review the comparative costs for providing residential, commercial and bulk garbage pickup, as outlined in the two contract proposals, and come prepared to vote on the issue at the October board meeting.

The second reading of an ordinance calling for a three percent water rate increase and charging a monthly $5 maintenance fee passed with Alderman Wade Cook casting the only “no” vote.

Since the sewer rate is set at 110 percent of the water rate, the cost for sewer service will also increase.

Mayor Anderson explained municipalities are required by law to charge whatever is necessary for the water and sewer system to be self-sufficient without using money from the general fund. If the City fails to do so, the State Comptroller’s Office has the authority to set the rates, which could be much higher than what the City Board would deem necessary.

Civil Air Patrol personnel from the Paris Squadron, who addressed the board, were: First Lt. Louis M. Santos; Master Sgt. Steven Nelson; and Cadet Master Sgt. Savannah McKnight. Santos is on active duty serving at Fort Campbell, while Nelson, who is retired, formerly served with a field artillery unit. McKnight is CAP cadet.

Lt. Santos stated the Civil Air Patrol is America’s premier public service organization for carrying out emergency services and disaster relief missions nationwide. As the auxiliary of the U.S. Air Force, CAP’s vigilant citizen volunteers are there to search for and find the lost, provide comfort in times of disaster, and work to keep the homeland safe. Its 56,000 members selflessly devote their time, energy, and expertise toward the well-being of their communities, while also promoting aviation and related fields through aerospace education and helping shape future leaders through CAP’s cadet program.

Mayor Anderson commended the Gleason Gazelles for their support of the Tater Town Special. He also expressed his appreciation to those that provided barbeque during the festival, which he stated is second in popularity to the Tater Town Parade.

The mayor announced this year’s Trunk-or-Treat is scheduled to take place in the downtown area from 5-7 p.m. on Saturday, October 29.