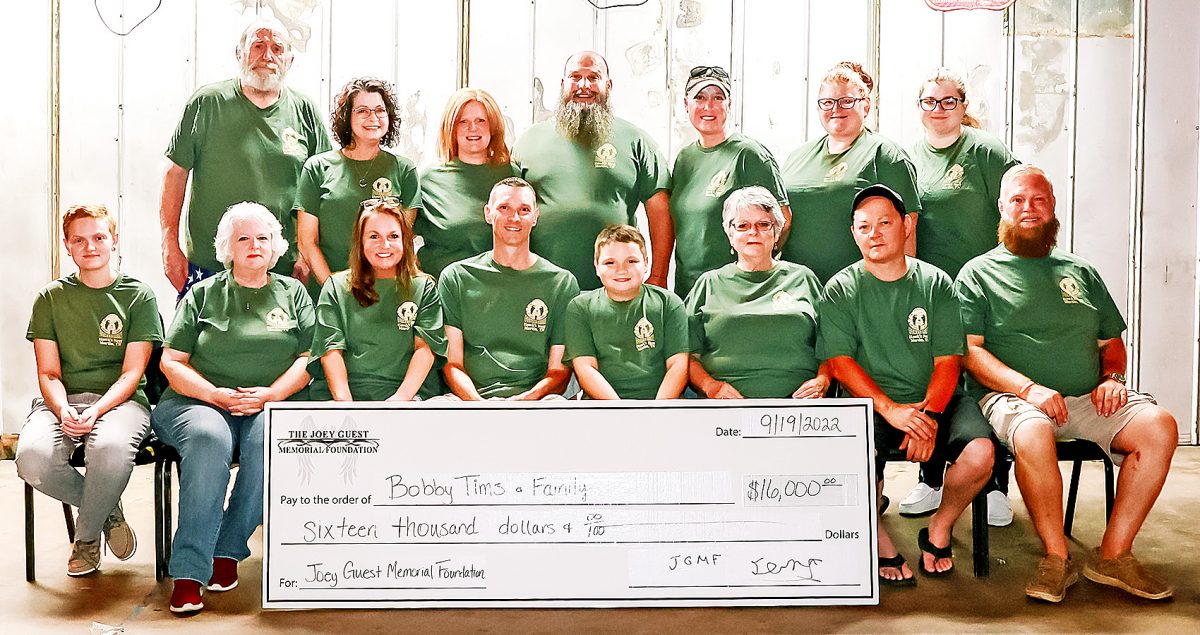 CHECK PRESENTATION – The Tims Family, along with members of the Joey Guest Memorial Foundation Poker Run, gather for a check presentation.

On Aug. 20 the 12th Annual Joey Guest Memorial Foundation Poker Run was held along with a silent auction and raffle at the Hawks Nest in Martin. On Monday, Sept. 19, the 2022 recipients of the donations raised received their check.

This year, $16,000 was raised for Bobby Tims and his family. Bobby Tims, wife, Amy, a teacher at Greenfield Elementary, along with their two children, Kaylee and Jace, were chosen to receive the funds this year.

Bobby Tims joined the Army National Guard Nov. 18, 1999 with plans of retirement in the near future. He has gone on two deployments. The first was from Aug. 2011-Aug. 2012 with the 913th to Kuwait/Afghanistan OIF/OEF. The most recent deployment involved spending a year in Loredo, TX in support of Customs and Border Patrol for the SW Border mission from Oct. 2021-2022. He was set to start work with Chem Station in Collierville but was diagnosed with bilateral pneumonia, brought about by COVID-19.

He was admitted to Baptist Union City hospital and two days later, moved down to the CCU unit because of oxygen dropping to 45%. He was placed on a rebreather and administered Remdesivir, but became significantly worse. On Jan. 10, 2022, he was placed on the vent. At this time, he was put under sedation.

After reevaluations, it was determined he would be a candidate for a trach, and a facility that specializes in Pulmonology was determined be the best option for Bobby. On Jan. 25, he was airlifted to Northeast Arkansas Baptist in Jonesboro, AR, and received a tracheostomy on Jan. 28. At this time, he was still sedated. He would remain sedated until they could safely bring him off of all of the four drips of sedation, and he was finally be untrached on March 11, 2022. At that time, he transferred out to Cane Creek for Rehab, with a diagnosis of “Functioning Quadraplegia.”

He had been through such a long period and heavy level of sedation that nerves and muscles weren’t working together as well anymore. When he first arrived at Cane Creek, he dealt with tachycardia, and had to be sent back to Baptist Union City hospital to regulate his heart rate and blood pressure, only for it to be discovered that he had a bacterial infection and needed antibiotics before he could return to Cane Creek to begin rehab again. He was finally discharged from Cane Creek on April 29, 2022 and is receiving continuous rehab at home.

Bobby will be off work for an unknown extended period of time. This family was chosen to try and make life a little easier for them during this difficult time.

This was made possible by those who participated in the Poker Run and the many local businesses and individuals who donated food, silent auction items and money.

The Joey Guest Memorial Foundation Poker Run was established in memory of the late Joey W. Guest. Joey was raised in Martin, going to school and playing football for Martin Jr. High and Westview High. He completed his Communications degree at UT Martin in 1999. He was a sports writer for the Weakley County Press for some years before moving on to a marketing company. He was a member of the Sons Of The American Legion. On February 20, 2011, Joey was out on his bike not knowing that would be his last ride.

The Joey Guest Memorial Foundation states; “In 2011 we lost an amazing friend. It didn’t take long to decide we needed to keep his memory alive by doing what he loved to do, helping others. In no time, family and friends got together to form an annual poker run to benefit families for whatever they may need. Whether it’s to help with medical expenses or setting up a trust fund for a child who lost a parent, or anything in between. In the last 10 years we have raised just over $118,000 and we’re not done yet. We hope to continue this event for many years to come. Joey left behind a legacy and we plan to keep his memory alive by continuing to help families who could use our help each and every year. Ten years ago most of us barely knew each other’s name. Now we are all family!”