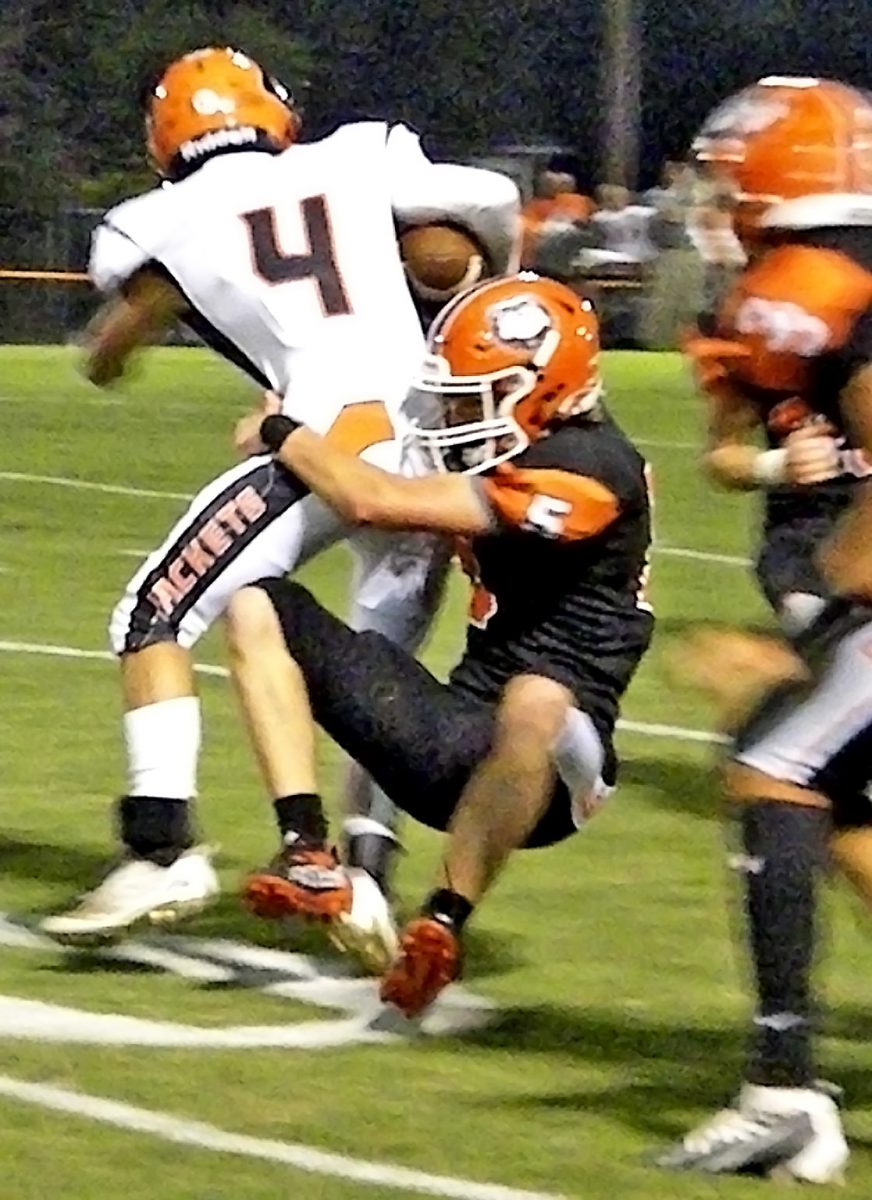 PULLED DOWN – Greenfield’s Tyler Isbell gets pulled down by Gleason’s Christian Goad.

County rivals Gleason and Greenfield clashed Friday night during Gleason High’s homecoming game, and the hosting Bulldogs came away with the win 58-20.

The Bulldogs came into the game 2-3 for the season compared with the Jackets’ 0-3 record.

Greenfield won the coin toss but deferred to the second half with Gleason’s Tistan Chandler making the first play of the night, starting the Bulldogs on the 50. Gleason started making small rushes for first downs that put them at the nine-yard line. Kyzer Crochet made a pass to Garrett Pinkston for the Bulldogs’ first score, Drake Lovell made the two-point conversion.

The Jackets did not have the ball long as they made a few short plays, but Gleason’s Drake Lehmkuhl got in the hole for an interception. Drake Lovell again crossed into the end zone to bring the score to 14-0.

The Jackets were in for another repeat with slow gains and a turnover, if not for Greenfield’s Nathaniel Hamilton recovering a fumble late in the first. But Greenfield could not make the first down as Matt Scates was tripped up behind the line, and  the Jackets were forced to punt.

Lovell made a 10-yard run and the Bulldogs finished the first quarter with the ball and in the lead.

The second opened with Gleason slowly working down the field and quarterback Kyzer Crochet making a pass to Garrett Pinkston yet again for a touchdown run. Austin Clark was on the two-point conversion and the score was now 22-0.

If the Jackets had any hope of quickly turning the game to their favor, it ended when the ball was fumbled and recovered by Gleason’s Austin Clark, who ran for a huge 65-yard touchdown. Kyzer Crochet secured the two-pointer for the score of 30-0.

The punt off to Greenfield did not put the Jackets out of the game as they started on the 50, but Alex King went long for 46-yards. A flag on Gleason moved Greenfield up to the two, and King made the run for a touchdown. The Jackets were trailing 30-8 after Matt Scates scored on the conversion.

Gleason may have had the ball but Greenfield’s Nathaniel Hamilton was working hard for the Jackets defense, making many tackles in the second quarter. But Gleason’s offense and penalties called on Greenfield put Gleason at the three-yard line, where Garrett Pinkston made his third touchdown of the game to bring the score up to 38-8.

The Jackets made another good push and Greenfield made another touchdown for a score of 38-14, which was the score going into the half.

Coming back, Greenfield was to start and hoped that they could make a turn in the second half. It seemed that it was possible as Matt Scates made a big pass but was intercepted by Gleason’s Kyzer Crochet. Garrett Pinkston then made his fourth touchdown on a pass from Kuzer Crochet. That took Gleason to 44-14.

The clock was running and Greenfield was struggling on the offensive side. The ball was turned over to Gleason, and the Jackets were unable to hold off the Bulldogs’ offense. Gleason’s Garrett Pinkston put the ball on the 31-yard line, after which Kyzer Crochet made a long pass to Jack Blassingame, who went in for a touchdown.

The fourth quarter began with Gleason leading 52-14, but Greenfield still had some big plays left in them. The Jackets were able to secure another touchdown that put the score at 52-20. An onside kick was made, but Greenfield was not able to recover the ball as Baker Atkins got down on it first. Gleason almost turned over the ball with a fumble but not before Drake Lehmkuhl recovered for the Bulldogs. Christian Goad made the last touchdown of the night for Gleason, putting the final score at 58-20.

Gleason will be off this week and will return Friday, October 7 in a region game against McKenzie. This win puts Gleason at 3-3 for the season.

Greenfield will be traveling to Humboldt in a region game this Friday, Sept. 30 with kickoff at 7:00 p.m. The Jackets are currently 0-4 for the season.