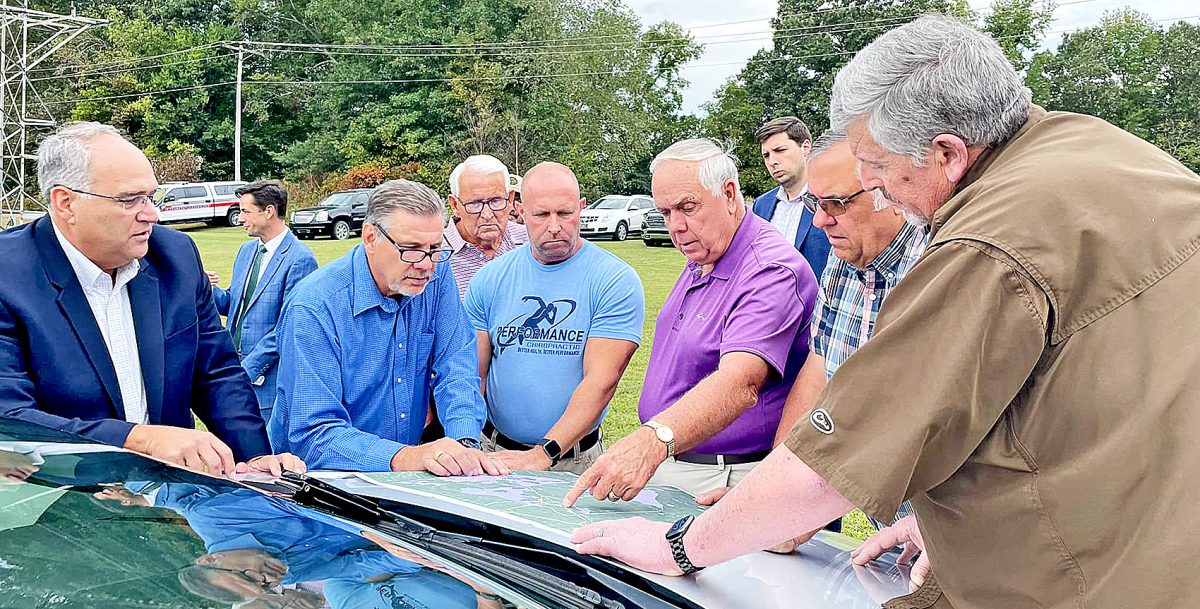 LOOKING IT OVER – Weakley County officials and representatives with the West Kentucky & Tennesee Telecommunications Cooperative look over a map of projected broadband service areas.

For Weakley County residents still without access to broadband internet service, funding has been made available and plans are being laid to remedy that situation.

State and local officials, West Kentucky & Tennessee Telecommunications Cooperative, Inc. CEO Trevor Bonnstetter, and several others, gathered at the corner of Greenfield Hwy 54 and Lower Sharon Road on Thursday, September 22 to announce WK&T has been awarded a $12.3 million grant from the Tennessee Department of Economic and Community Development under its Tennessee Emergency Broadband Fund – American Rescue Plan, for the purpose of expanding fiber broadband internet service in Weakley County.

Weakley County is providing an additional $5.3 million, making a grand total of $17.6 million invested in this project alone.

Local officials looked over a map of projected service areas. However, Mayor Bynum said, “It’s not in one specific area.”

According to Mayor Bynum, Phase I, which covers a rural area encompassing Sidonia and extending nearly to Sharon, and Collins Subdivision over to Greenfield, is complete; Phase II, which includes the households in the vicinity of Palmersville and Latham, is nearly complete; and areas of Weakley County to be covered by Phase III (the broadband grant announced on Sept. 22) is yet to be determined.

Prior to the Phase I, Phase II and Phase III projects, Weakley County received two USDA grants that did not require local matching funds. One of the USDA grants provided funding for installing broadband fiber in the Dukedom area, and the other was in the Pillowville Community.

“With this exciting announcement, Weakley County has made substantial progress in facilitating access to high-speed broadband,” Mayor Bynum said. “This access is the great equalizer and allows our citizens the ability to connect both with local loved ones and the global economy. We would never have been able to make these strides without the work of the Weakley County Commission, the TN Department of Economic and Community Development, federal partners, and especially WK&T.”

The mayor expressed his appreciation to Commissioner David Bell and WK&T CEO Trevor Bonnstetter for their commitment to the future of Weakley County and its citizens.

“While we celebrate this news today, we must continue to be diligent to close the gap so that every rural Weakley Countian has the same opportunity,” said Bynum. “We are so excited for this step forward in bringing broadband access to as many Weakley Countians as possible. We look forward to updating the public on areas this project will cover in the future, but as of now, WK&T is waiting for engineers to evaluate locations.”

Tennessee Governor Bill Lee and TNECD Commissioner Stuart McWhorter state that Tennessee will award $446,770,282 in grants for the expansion of internet access across the state of Tennessee.

According to the 2020 Broadband Deployment Report published by the Federal Communications Commission (FCC), one in six rural Tennesseans lacks access to broadband. Since 2018, TNECD has awarded nearly $120 million in broadband grants through state and federal funding to serve more than 140,000 Tennessee households.

The U.S. Department of the Treasury previously defined “unserved areas” as lacking access to a wireless connection capable of minimum speeds of 25 megabits per second (Mbps) download and 3 Mbps upload. However, due to the increasing demands of the digital age, any connection that provides lower than 100 Mbps download speed and 20 Mbps upload speed is now deemed “unserved.” In consideration of this new definition, application priority was still given to those with the lowest internet speeds, but all applications under this new definition of “unserved” were considered.