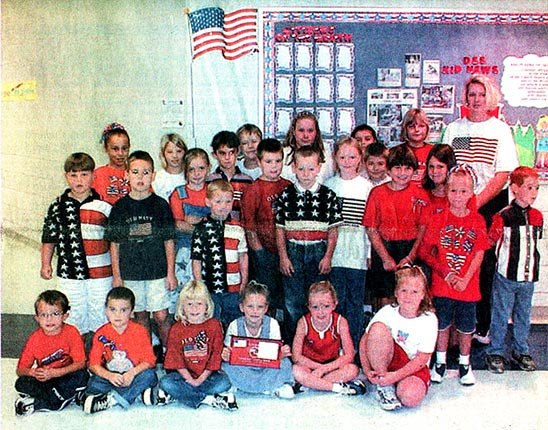 Flashing back to the Monday following the September 11, 2001 terrorist attacks, Dresden Elementary School teacher Penny Abshire posed with a group of DES K-4th grade students who showed support of the nation by donning their red, white and blue attire. The students also collected money to donate to families of the victims of the terrorist attacks. 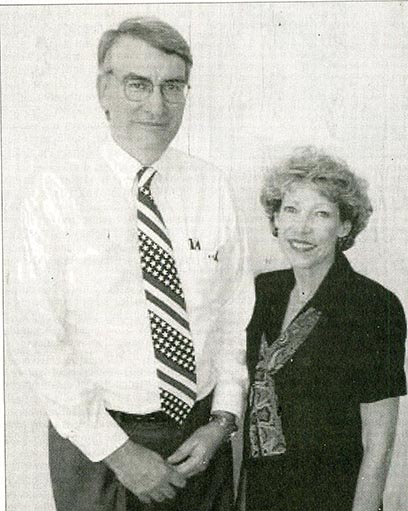 Bobby and Suzie German of Dresden were on a homebound plane when the Twin Towers and Pentagon were hit by hijacked planes on September 11, 2001. The couple’s flight was re-routed to Canada, where they spent the next five days in the community of Gander, Newfoundland.

Students at Dresden Elementary School used art to express their emotions about the terrorist attacks September 11, 2001. Taylor Hill, a third-grader at DES then, had her poster featured in the Enterprise that September.

After three planes were hijacked and crashed into the World Trade Center in New York and the Pentagon in Virginia on Tuesday, September 11, 2001, signifying one of the most tragic acts of terrorism against the United States, time seemed to stand still across the country that day.

In the days that followed, communities united as headlines and news stories were shrouded in red, white and blue, highlighting the acts of patriotism that amplified the “indivisible” portion of the nation’s “Pledge of Allegiance.” Locally, the pages of the Dresden Enterprise echoed the nationwide tone that was set after the fateful day in America. From remarks by city and county officials to photos of local students dressed in red, white and blue, Weakley County showed its spirit of community and patriotism in a number of ways.

National Guard armories in Dresden and Martin were barricaded, with extra security precautions in place as a result of the terrorist attacks.

Donald Doster, who served as County Trustee and pastor of Union Grove Baptist Church, organized a prayer vigil on the lawn of the courthouse that afternoon. Schools in the county held moments of silence while other groups gathered to pray for the victims and their families, first responders and the nation. Numerous motorists rushed to gas stations to fill their vehicles and containers after rumors circulated gas prices in Memphis soared to $7 per gallon and $4 per gallon in Jackson. Locally, people waited in line for more than 30 minutes to fuel as gas station owners announced they would not go up in price as a result. Dresden couple, Bill and Gertie Sheffield, told David Fisher of The Enterprise they were concerned for their daughter, Tracy Shepherd, who worked in the Pentagon building for less than a year when a plane struck part of the building. The Sheffields reported their daughter was not in the area of the building that was hit, although she seemed to be in shock and awe of the event. Across the globe, other leaders reached out to those in the U.S., including Takashi Kanazawa, mayor of Hirosaki, Japan.

The City of Martin had a middle-school, exchange-student partnership with Hirosaki. When Kanazawa heard the news of terrorist attacks, he faxed a letter to then-Martin Mayor Larry Taylor offering sympathy and support from abroad.

People in Tennessee continued to live up to the Volunteer State’s slogan as they lined up to give blood for victims in New York and Virginia. Donors formed lines outside of LIFELINE Blood Services in Jackson, as well as at the Bloodmobiles.

McAlpin announced a request issued by the Tennessee Emergency Management Services (TEMA) seeking emergency responders, nurses and doctors to mobilize at what would later be named “Ground Zero.” TEMA rescinded its request after volunteers had to be placed on waiting lists as they far exceeded the initial number requested.

American flags flew off the shelves at local retailers. Advance Specialties, a Gleason business, reported selling out of 70 car flags within six hours. Owners even shared someone had driven from Cincinnati, stopping at places in search of a flag to purchase.

In the days to follow, flags were placed on vehicles, homes and lapels.

Students collected donations, wrote letters and drew patriotic posters for victims and their families. Clothing and shoes were collected by students at UT Martin for the American Red Cross. Community members shared their moments of “shock, disbelief and fear,” along with expressions of unity and patriotism. The importance of the roles of first responders, such as police officers and firefighters, was especially brought to the forefront as they became the heroes at “Ground Zero” who would dig through the rubble in search of victims in the days following the collapse of the twin towers.

The community spirit and patriotism crossed not only city, county and state lines; it spanned the country’s borders as portions of Canada greeted Americans, including Dresden couple Bobby and Suzie German.

Bobby German served as president of Weakley County Bank, while his wife, Suzie, was the assistant executive director of the Weakley County Chamber of Commerce. The couple was returning home on a flight from London when the terrorist attacks halted the United States’ air travel and diverted planes. One hundred and ninety-eight passengers on the Boeing 777, United Airlines Flight 929, were bound for Chicago’s O’Hare International Airport, unknowingly headed for Gander International Airport in Newfoundland, Canada. As the plane landed on the runway, the Germans said the pilot finally announced to the passengers the hijacked planes crashed into the World Trade Center and Pentagon. Flight attendants were advised to be aware of potential terrorists who might be on board the plane. The couple’s plane landed in Gander, Newfoundland, along with 38 other jets, transporting 6,100 people. There were 200 planes transporting about 30,000 people diverted to Canada that day. The Germans spent 21 hours on their plane, having to spend their first night in Canada on the aircraft, due to limited accommodations in the town.

Although school bus drivers were on strike in the Gander community that September, bus drivers mobilized to transport plane passengers to neighboring communities. Bobby and Suzie German, hauling only their carry-on bags, were taken to a Salvation Army Church in Gambo.

Community members prepared three meals a day and opened their bathrooms for showers for the 198 plane passengers. Those who were elderly, with children or who had medical needs, were offered shelter in local homes to avoid staying at the church.

Gambo residents shuttled their visitors throughout the community on sight-seeing tours for the next few days.

The Germans and their fellow passengers finally left the following Sunday bound for the United States.

Those on the plane created a website, www.ua929.org, to stay connected with one another and those in the Gambo community. Eventually, a tourism group in Gander, Newfoundland, created a movie, “Come From Away,” that told the story of how the Canadian town welcomed 6,100 people into its communities in the wake of the 9/11 tragedy. September 2011 became etched in history as a time when the world grieved for America, patriots united and ages from all walks of life demonstrated a true sense of community spirit among one another.