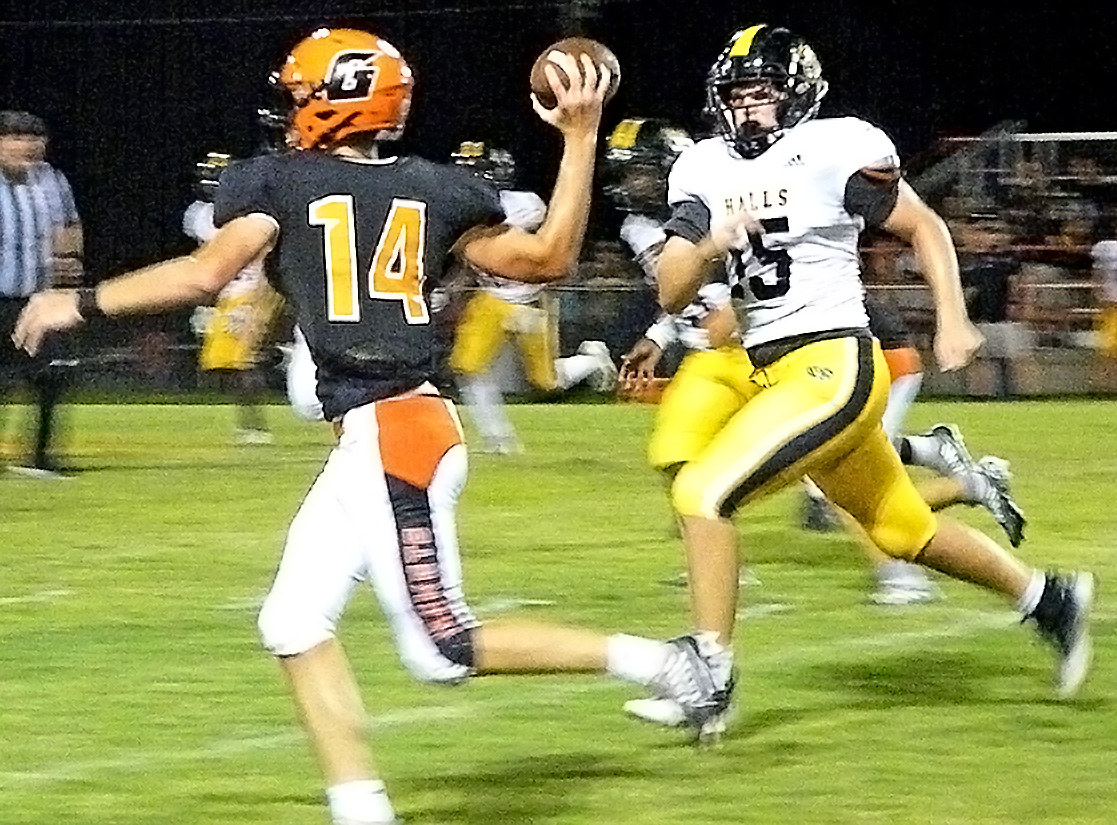 RUSHING TO PASS – Greenfield’s quarterback #14 Matt Scates rushes past a Halls player to make a pass. Photo by Jasmine Williams.

The Greenfield High School Yellowjackets have not had the easiest start for the football season. Losing to Dresden 48-6 in week two, the Jackets hoped to pick up their first win of the season against Halls this past Friday night. The game had many setbacks penalty wise, and the Jackets went into their bye week 0-2 after losing to Halls 34-14.

Since the coin toss went to Greenfield, who deferred to the second half, Halls began the game on offense. The Tigers spent much of the first quarter making their way down the field as the Jackets defense was off to a strong start. Halls was able to break through for a touchdown near the end of the first quarter.

Tyler Isbell was on the return, bringing the Jackets to the 48-yard line. This head start helped the Jackets score a touchdown to tie the game at 6-6.

The Tigers were not slowing down as they began the second quarter with another touchdown and a two-point conversion for a 14-6 lead.

The Jackets’ offense struggled the entire game against Halls’ defense, and they were almost forced to turnover the ball on downs. However, a penalty by Halls gave the Jackets a first down.

The Jackets’ hopes for another touchdown were dimmed when a fumble resulted in the Tigers taking over, and a long pass then gave the Tigers a 20-6 lead.

The Jackets suffered two sacks while having the ball in their possession, but that left the Tigers with little time to increase their lead before the half.

Greenfield’s offense and defense saw a drop in the second half, opening up the third quarter with a fumble, which Halls recovered.

The frustration was high for the Jackets when an argument between opposing players resulted in junior Alex King for Greenfield being benched for the remainder of the game, as well as the next game against Peabody.

The Tigers still had their lead at the start of the fourth quarter at 27-6, and it seemed as if the Jackets would not have another opportunity for a touchdown. But when Halls punted to Greenfield it gave them just the opportunity they needed.

Halls prepared to punt the ball to Greenfield when the punt was fumbled, and a swarm of Jackets tackled to put the team on Halls’ four-yard line. The following play had senior John Featherston make the yards needed for a touchdown. The Jackets followed it up with a two-point conversion. It was not enough to win the game, but the Jackets were able to secure another touchdown for the night.

Halls succeeded in winning over Greenfield with a final score of 34-14.

After the game, Head Coach Russ Brown stated that the team will be working hard during their bye week to hopefully turn this season around, as they will be one player down and facing a tough opponent.

While Greenfield will have the night off this upcoming Friday, the Jackets will be facing perhaps their biggest challenge of the season when they play in a region game at Peabody High School on Friday, September 16. Kickoff is at 7:00 p.m.