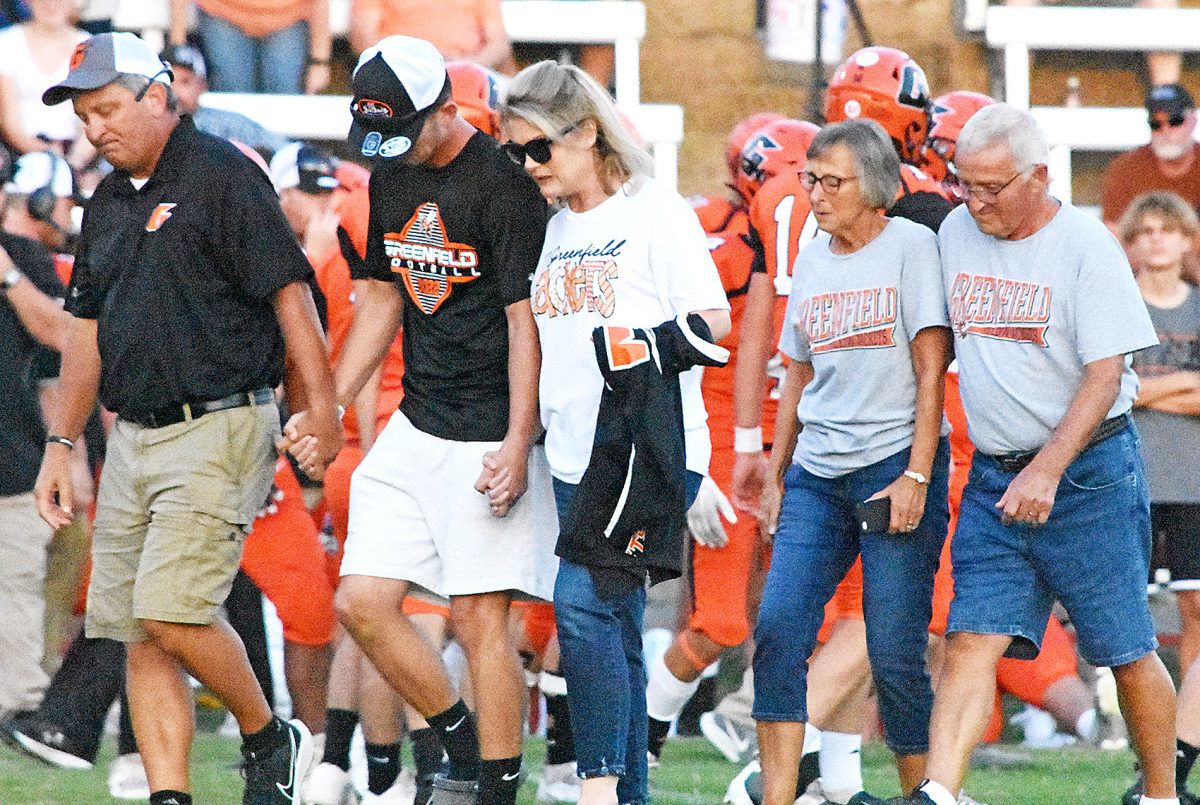 LEAVING THE FIELD – In an emotional moment, Greenfield senior Blake Rodehaver is escorted off the field by his parents, Jason and Shonda Rodehaver, followed by his grandparents, Rick and Barb Rodehaver. 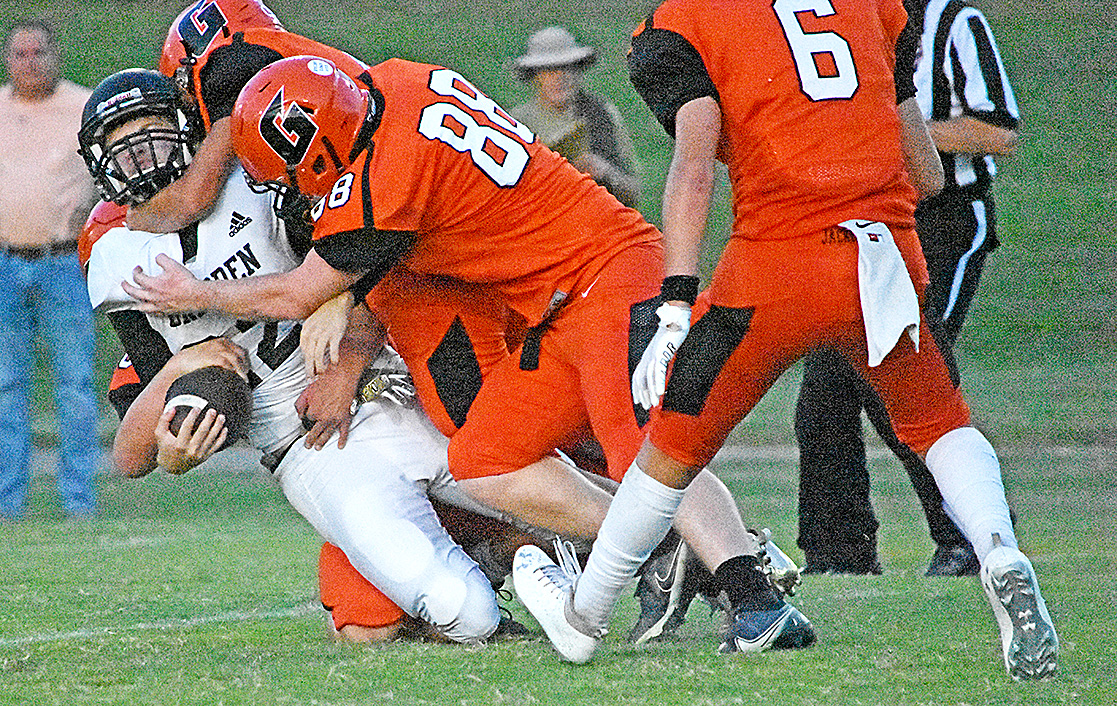 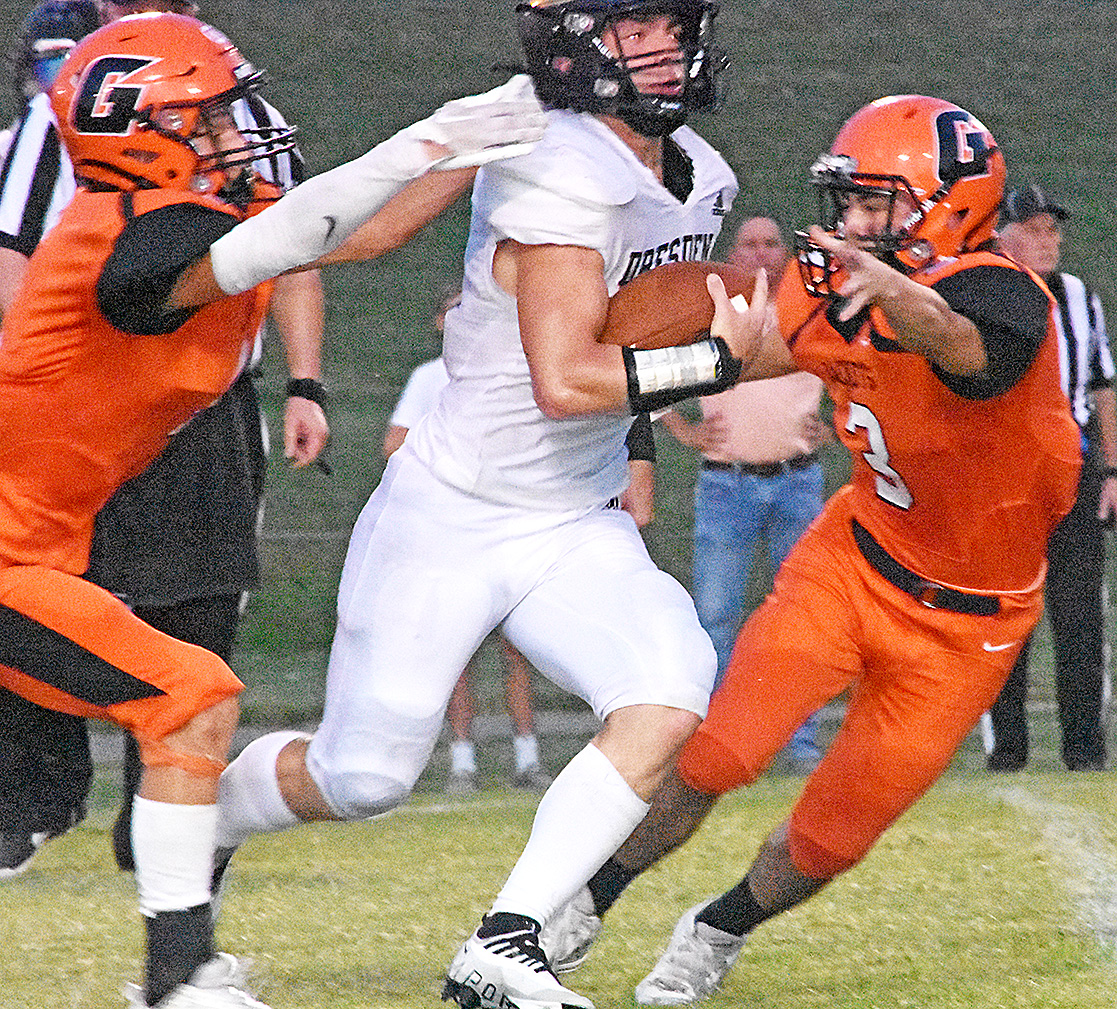 ALL THE WAY – Dresden’s Nick Turnbow takes a punt return all the way home during the Lions’ 48-6 win over Greenfield Friday night. That play, however, was called back on a penalty. Photos by Ron Park.

The Dresden High School Lions dominated both offensively and defensively Friday night in Greenfield as they defeated the Jackets 48-6 in non-region, cross-county competition.

But before the game, special honors and recognition was given to Greenfield senior Blake Rodehaver and his family. Blake suffered from a life-threatening medical emergency during the Aug. 19 season opener against South Fulton, and he was airlifted to Vanderbilt Medical Center. He has since returned home, but, according to Greenfield head coach Russ Brown, he will not be able to continue playing sports.

Blake joined his teammates on the field as a special captain during the pregame coin toss, and then Blake; his parents, Jason and Shonda Rodehaver; and his grandparents, Rick and Barb Rodehaver, were all recognized to applause from Greenfield and Dresden fans alike.

In Friday night’s game, the Lions were ahead 27-0 by the end of the first quarter.

On the opening drive, Dresden quarterback Tatum Oliver found Jaylyn Mitchell for a 31-yard scoring pass play. Tristan Jett stepped up next with an 82-yard breakaway sprint for a touchdown at around the five-minute mark. With just 43 seconds left in the first, Mace Wilson ran it in from 10 yards out, and then just 20 seconds later, Jett put it back in the endzone after intercepting a Greenfield pass. Mark Maddox delivered on three of the four extra-point attempts in the first, but, after Jett’s first TD, Maddox was tackled by Jacket defenders following a dropped snap.

Early in the second quarter, Dresden’s Nick Turnbow returned a Greenfield punt all the way, but a penalty cancelled it out. Jett made his third trip across the goal line on a 12-yard run with 7:33 left in the second quarter, and, four minutes later, Oliver scored on a six-yard keeper carry. Maddox made good on both extra point kicks, and the Lions were way up 41-0 at the half.

The second half zipped by quickly on a continuous clock. With 2:45 left in the third quarter, Oliver chalked up Dresden’s final touchdown of the night on a big 49-yard keeper, and Maddox added the PAT.

But it was the Jackets who had the last word as Greenfield quarterback Matt Scates launched a long bomber to Austin Griffin for six with 9:22 remaining. Dresden defenders stopped Scates on the conversion attempt, leaving the final tally at 48-6.

Lion backup quarterback Tanner Oliver ran one into the endzone later in the fourth, but it was called back on a penalty.

Notably, Greenfield’s Alex King delivered some big defensive plays, including a quarterback sack in the third quarter and taking part in the tackle on Maddox in the second.

“I thought we put together a full game compared to last week, other than penalties,” said Hodge. “Defense played very well as a unit and gave our offense plenty of opportunities to put points on the board. Preparing to defend the flexbone offense is always difficult, but we stuck to our assignments and it showed throughout the game. Special teams again was big for us as we created some big returns, and our kickoffs pinned their offense deep most of the night. Offensively our running game improved from last week, and we want to continue to focus on that area. We need to continue to spread the ball around and give guys opportunities to contribute.”

“Friday night didn’t turn out the way we wanted it to,” said Brown. “Dresden is a very good football team. I felt like our effort lacked in a couple of places. Also, we had to put some people in positions that they normally wouldn’t play due to those injuries.”

The Lions will be hosting Perry County this upcoming Friday night for their first homefield experience and first region contest of the season.

“It will feel good to be back at Rotary Field after being on the road for two weeks,” said Hodge. “Perry County runs a style of offense that is hard to prepare for. Tons of moving parts from their wing that can cause us issues. Being disciplined will be a big key for us. Defensively we think they’ll bring pressure and mix up their fronts. We’ll need to handle that pressure early and take advantage of things we see.”

The Jackets are set to host Halls in a regional battle of their own.

“Every region game is important and almost all of them have some sort of playoff implications, so we have to be on our A-game this week,” said Brown.