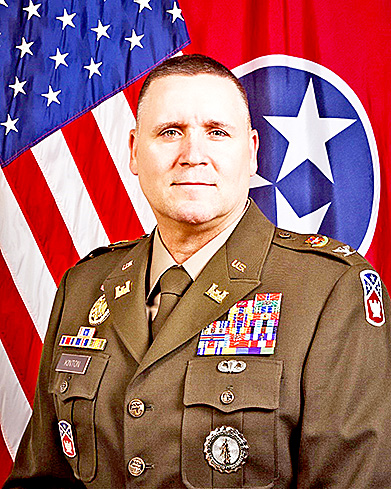 Col. John “Corey” Kinton is the new commander of the 194th Engineer Brigade. 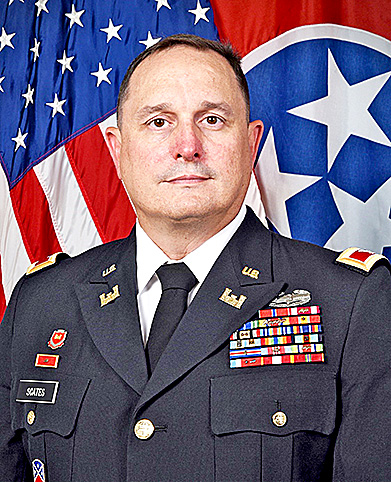 Col. Michael “Trent” Scates recently relinquished command of the 194th Engineer Brigade during a change of command ceremony at the National Guard Armory in Jackson.

The Tennessee National Guard’s 194th Engineer Brigade performed a change of command ceremony at the National Guard Armory in Jackson on Sunday, August 7.

Col. Michael “Trent” Scates of Greenfield, outgoing commander of the 194th Engineer Brigade, relinquished command to Col. John “Corey” Kinton, who at that time was serving as the Director of Military Support for the Tennessee National Guard.

Col. Scates moved to Joint Force Headquarters in Nashville, where he serves as the Joint Director of Military Support (JDOMS) for Domestic Operations.

During his long and distinguished military career, Scates served as executive officer for the 194th Engineer Brigade in Jackson, as well as commander of the 230th Engineer Battalion in Trenton. He also held numerous other leadership and staff positions in Jackson, Trenton, and Union City.

Scates placed heavy emphasis on readiness and being trained to meet any contingency. The soldiers with the 194th assisted with recovery operations during the Humphreys County flood, aided hurricane relief in Louisiana, and supported statewide COVID-19 testing and vaccination efforts, as well as supported area hospitals by augmenting hospital staff.

As the Director of Military Support for the last two years, Kinton has managed all of Tennessee’s military response to emergencies, disasters, civil unrest, and COVID-19. He has nearly 34 years of military experience, enlisting in the Tennessee National Guard in October 1988 and commissioning as an Engineer Officer through the University of Tennessee at Martin’s Army ROTC program in 1994. During his career, he deployed numerous times to Iraq, Kuwait, Afghanistan and various countries throughout Europe, Asia, and Central America.

Concerning his civilian occupation, Scates serves as Program Director for the Physician Assistant Program at Bethel University in McKenzie and works one day per week as a Physician Assistant-Certified in Family Practice/Internal Medicine at Dresden Medical Clinic in Dresden, Tennessee.

As an M-Day soldier, Scates attends weekend drills and annual training activities, but is not on full-time duty. However, as a member of the Tennessee Army National Guard, he is subject to being activated at any time to respond to emergencies at home or abroad, or in times of war.

Kinton works full time as an Active Guard Reserve officer, and therefore, has no civilian occupation.

“Col. Kinton is a very good person to hand the 194th Engineer Brigade off to, and I look forward to what the future brings for the 194th,” Scates said.

The 194th is one of nine engineer brigades in the Army National Guard and consists of over 2,000 soldiers. Subordinate units are located throughout Tennessee. As part of the Tennessee Army National Guard, the 194th Engineer Brigade serves a dual purpose. Under state command, the brigade may be used to provide assistance and support during natural disasters or quell civil disturbances. As a result, the brigade must train to meet both federal and state training requirements.