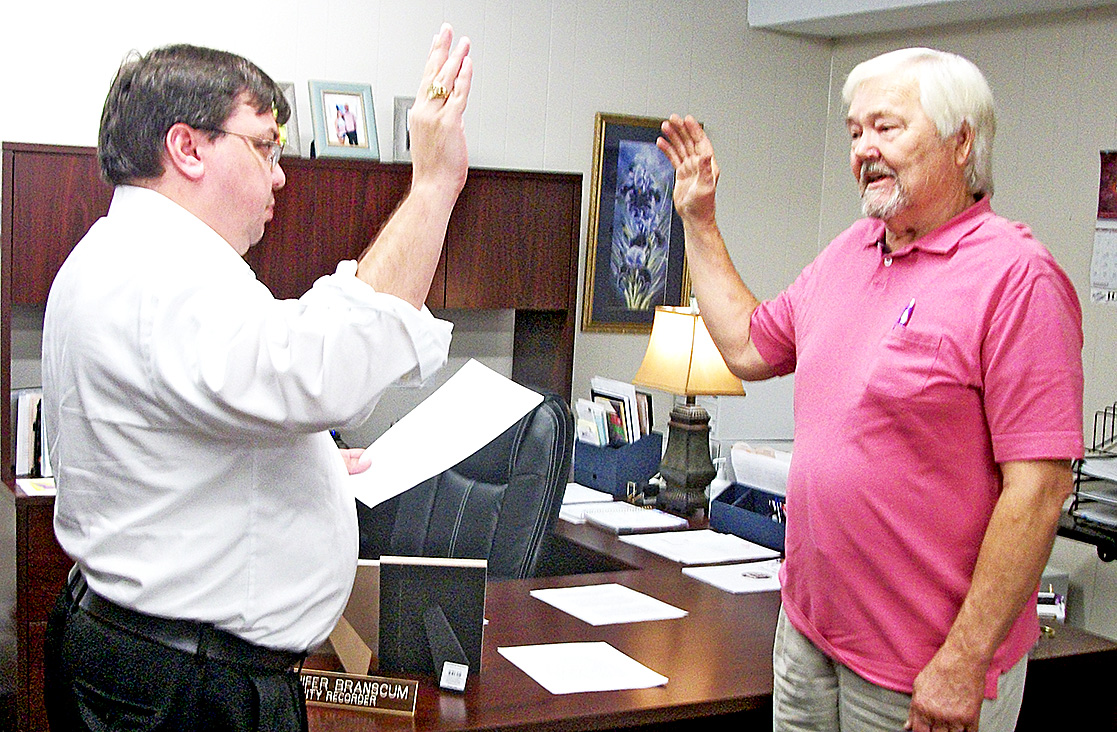 Dresden City Attorney Beau Pemberton (left) administers the oath of office to in Interim Alderman Donnie Essary, who was sworn in following Tuesday night’s special-called meeting of the Dresden City Board. The vacancy came about due to Alderman Lyndal Dilday resigning and turning in his petition for mayor. Essary will serve as alderman until the November 8, 2022 General Election.

DRESDEN — During a called meeting of the Dresden City Board on Tuesday, August 30, Donnie Essary was appointed to the post of Dresden City alderman, to fill the vacant seat of Alderman Lyndal Dilday, who resigned earlier this month. Dilday offered his resignation in order to run for the office of mayor, in the November 8, 2022 General Election, as required by municipal ordinances and the city charter.

As the meeting got underway, Mayor Jeff Washburn stated he believes it would be in the best of the City for him to nominate someone who is not running for the office of mayor or alderman.

Washburn said, in choosing a nominee for the job of alderman, he reasoned it would be best to select someone with experience.

“The name that came to me was Donnie Essary,” Washburn said

Washburn noted Essary previously served as a Dresden alderman for six years. He was appointed to a two-year term to fill the unexpired term of former Alderwoman Joyce Hurt, and was later elected to a four-year term. Essary, who also served on the Weakley County Commission for four years, recently decided not to seek another term of office.

“Donnie is aware of the issues before the city at the current time,” the mayor said. “He was also a leader in our recovery effort, by immediately springing into action and cleaning up his own property, then beginning the rebuilding process. He was one of the first businesses to reopen, which is admirable on his part.”

The board voted unanimously to appoint Essary, following a motion by Willie Parker and second by Ralph Cobb.

“I’m glad to be able to serve again for a few months,” Essary said. “I love the City of Dresden. I always have, and I appreciate the opportunity to serve again.”

In announcements, Mayor Washburn stated because the first Monday in September is Labor Day, the next regular monthly meeting of the Board of Mayor and Aldermen will be held on Monday, September 12, 2022, beginning at 6:00 p.m. The mayor noted this will be the date when Essary will be seated as alderman.