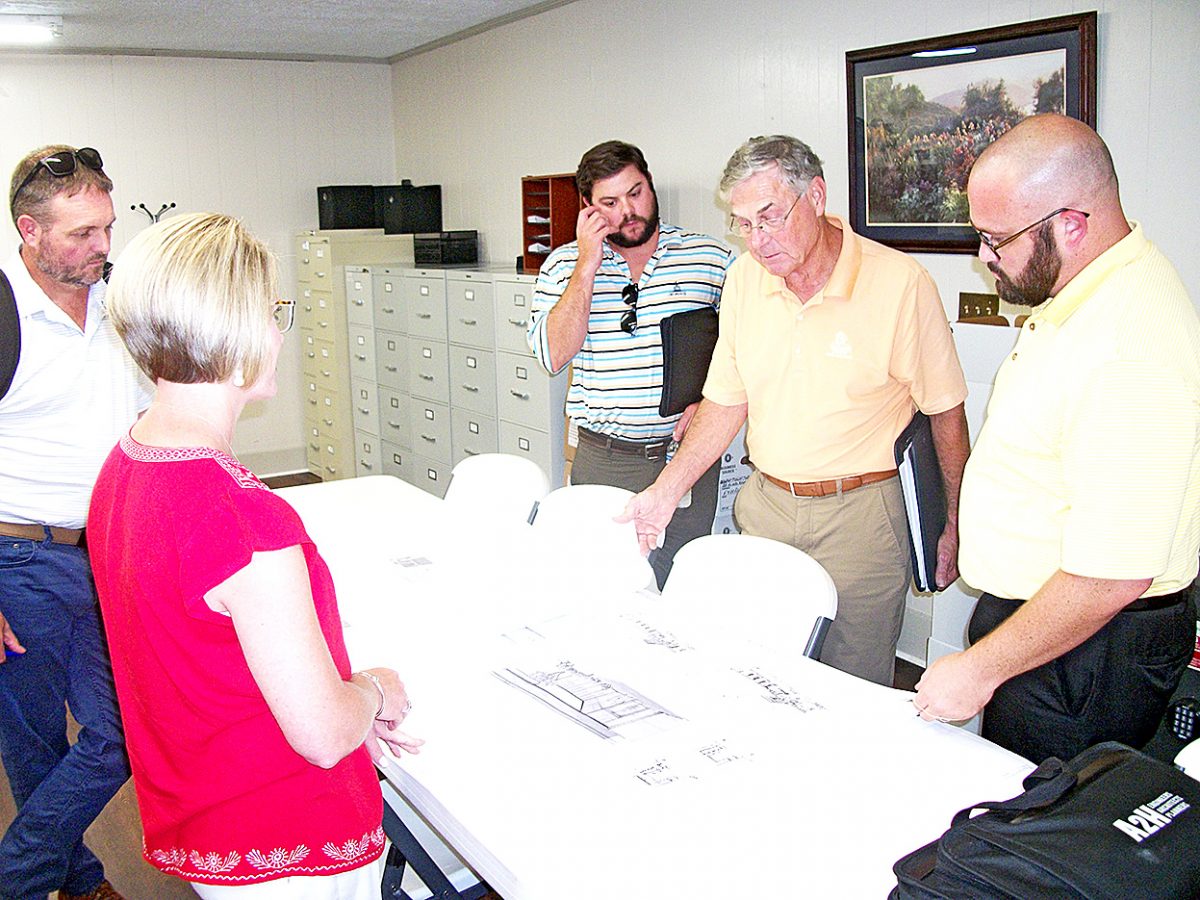 PLANS AND OPTIONS – Dresden city officials look over preliminary architectural drawings for a municipal complex to replace the city hall, fire department and police department, which were all destroyed in the December 10, 2021 tornado. They also considered various options to adjust the plans to fit the space available on city-owned property.

Dresden leaders met with construction managers and engineers on Thursday, August 18 at Dresden City Hall to discuss the design of a municipal complex, which will house the city hall, fire department, and police department facility.

The destruction of these departmental buildings by a tornado that tore through downtown Dresden on December 10, 2021, makes it necessary for these structures to be rebuilt. The question city planners are grappling with is: “What type of structure should it be?”

After looking at cost estimates for constructing separate buildings for these departments, compared to having them all under a single roof, it was determined that there would be significant cost savings if the city hall, fire department and police department were combined into a single municipal complex.

Thursday’s meeting focused on identifying the constraints of the site, such as, which properties will be available to work with, and what the utilities look like, so architects can start developing a schematic plan for the building.

According to A2H Senior Civil Engineer Travis Martin, another important factor is determining the footprint of the building.

“We want to make sure the building fits in the space we have in a way that makes sense to the city,” said Martin.

He also said the shape of the complex might be a little different than the plan his firm presented earlier this year, but the square footage should be about the same.

The topic of including a “safe room” in the plan to protect citizens during tornadoes or other dangerous weather-related events was also discussed.

City Recorder Jennifer Branscum stated the Dresden City Board will have to decide if it wants to pay for some, or all, of the costs for the safe room out of local tax dollars if FEMA fails to cover the cost of the project.

Branscum noted FEMA is waiting on the city to develop cost estimates before the project can move forward.

Martin stated there is a high probability FEMA will approve the “safe room” project. “I think we want to base our design on the assumption FEMA will fund it,” he said.

Martin explained that if FEMA doesn’t approve a storm-resistant safe room, it would be a simple matter to substitute standard building materials utilizing the same floor plan.

The design of the fire department portion of the municipal complex was explored during the meeting, but nothing definite was decided. Some of the options discussed included the possibility of:

Additionally, there was some discussion concerning where the main entrance to city hall should be located. It was agreed that placing the public entrance facing Main Street, as it did on the former building, was the logical choice.

The plan also calls for having common areas, which could be utilized by city employees from the various departments. This might include a large meeting room for public gatherings and training classes for the police and fire departments. A smaller common area could be used as a combination breakroom and location for departmental meetings.

Martin stated the project has a lot of moving parts and compared the complexity of planning for the municipal building to the popular 3-D combination puzzle, the Rubik’s Cube.

As the meeting came to a close, Mayor Washburn thanked the local citizens who attended the meeting for their interest in city governmental affairs, including those running for public office. In addition to Mayor Washburn, those Dresden mayoral candidates in attendance included Brandi George and Mike Vernon. Local citizens seeking aldermen’s seats included Lana Eaves, Tom McWherter and Kenneth Gatewood.

When asked for an update on Monday, Mayor Washburn stated the architects are in the process of developing concept drawings.

“Hopefully, in a couple of weeks, we’ll hear something,” Mayor Washburn said.