Blake Rodehaver, #15, looks to go in for a tackle against South Fulton. He later suffered from a medical emergency that resulted in him being airlifted to Vanderbilt. He is currently under testing and is in good spirits. 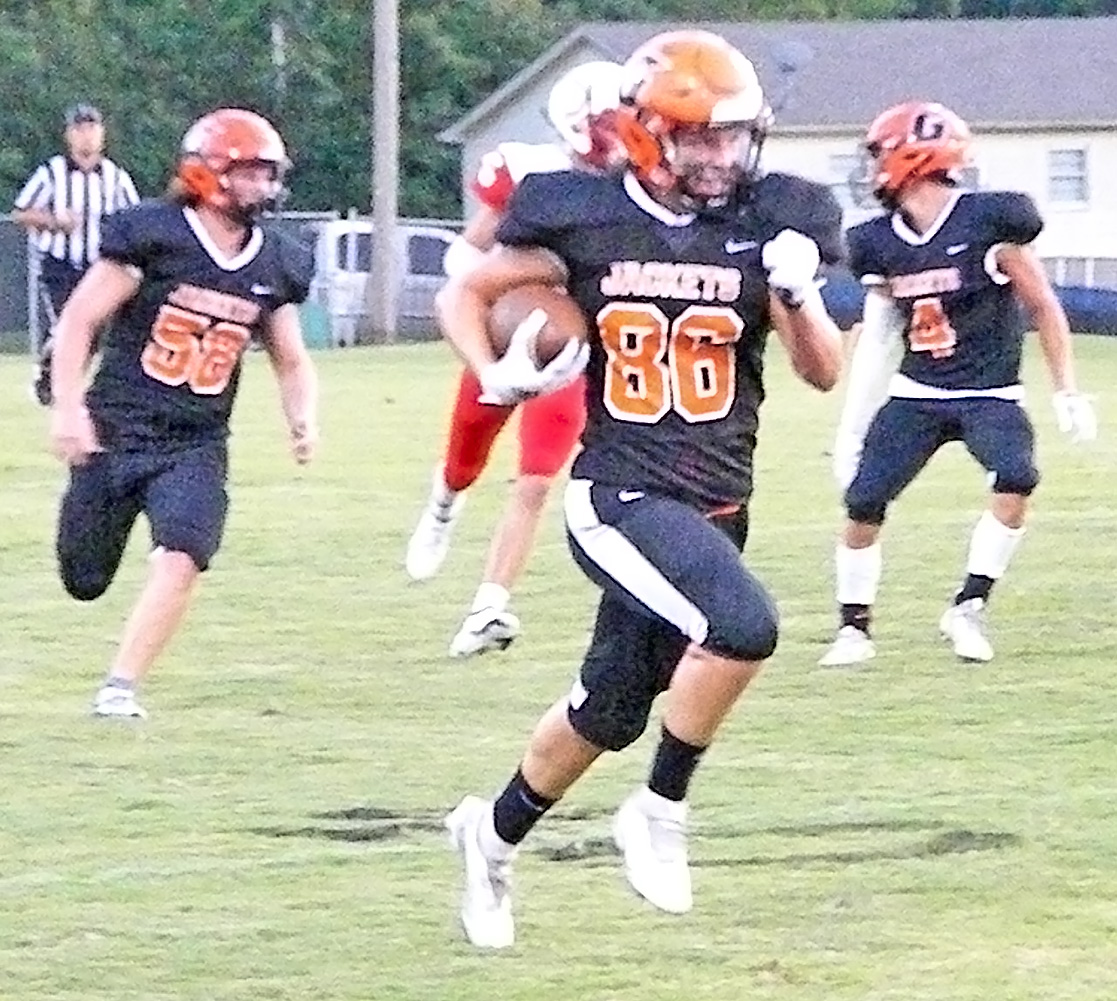 Alex Garcia, #86, moves the ball to the first down while Tyler Isbell, #4, and Landon Clark, #58, protect his back from an approaching Red Devil.

What was to be the beginning of the Greenfield Yellowjackets’ football season with long-time rival South Fulton turned into a game of rising tempers on the field, injuries, and a player ultimately being airlifted.

Senior running and defensive back Blake Rodehaver suffered from an unknown medical emergency late into the fourth quarter of the game. This resulted in an ambulance being brought to the field and Rodehaver being airlifted to Vanderbilt. He is currently stable, and the reason for this medical emergency was unknown as of publication.

Due to the seriousness of the situation, the game was declared no contest and will not be reflected on Greenfield’s or South Fulton’s season records, and it will not affect region standings or playoff eligibility..

Before this medical emergency, the Red Devils and Jackets were in a heated competition.

Greenfield began the game with the ball and made quick work moving down the field and scoring their first touchdown of the season.

The Jackets received the ball shortly thereafter as South Fulton threw an interception which was caught by Greenfield junior Tyler Isbell. Isbell then ran for a long touchdown, but the score was waved off by a penalty made by the Jackets.

Isbell was busy Friday night as he quickly made another touchdown early in the second quarter, and with the two point conversion, that put the Jackets up 14-0.

Both teams then handed off the ball due to turnovers from downs, which gave South Fulton the ball for a touchdown, making the score 14-6.

Another active player during the game was senior John Featherston, who suffered an ankle injury in the second quarter.

The deep rivalry and injuries being sustained during the first half may have been what resulted in a fight nearly breaking out against the Jackets and Red Devils. Coaches and referees were successful in preventing any physical altercation, but this resulted in multiple, offsetting penalties for unsportsmanlike conduct for both teams. South Fulton was also called for a face mask penalty that gave Greenfield an additional 15 yards on their next play.

This did not slow the Jackets down much as Matt Scates ran for his first touchdown of the night to up the game to 20-8. That was the score at halftime, and South Fulton began the third quarter with the ball.

In spite of a fumble, the Red Devils eventually made another touchdown which brought the game to 20-14. The fourth quarter began with an interception by South Fulton that was quickly fumbled and recovered by Matt Scates. Scates had a mild injury, but after a checkout, he went back into the game a few plays later..

The Jackets will be hosting the Dresden Lions Friday night in a non-region contest starting at 7 p.m.