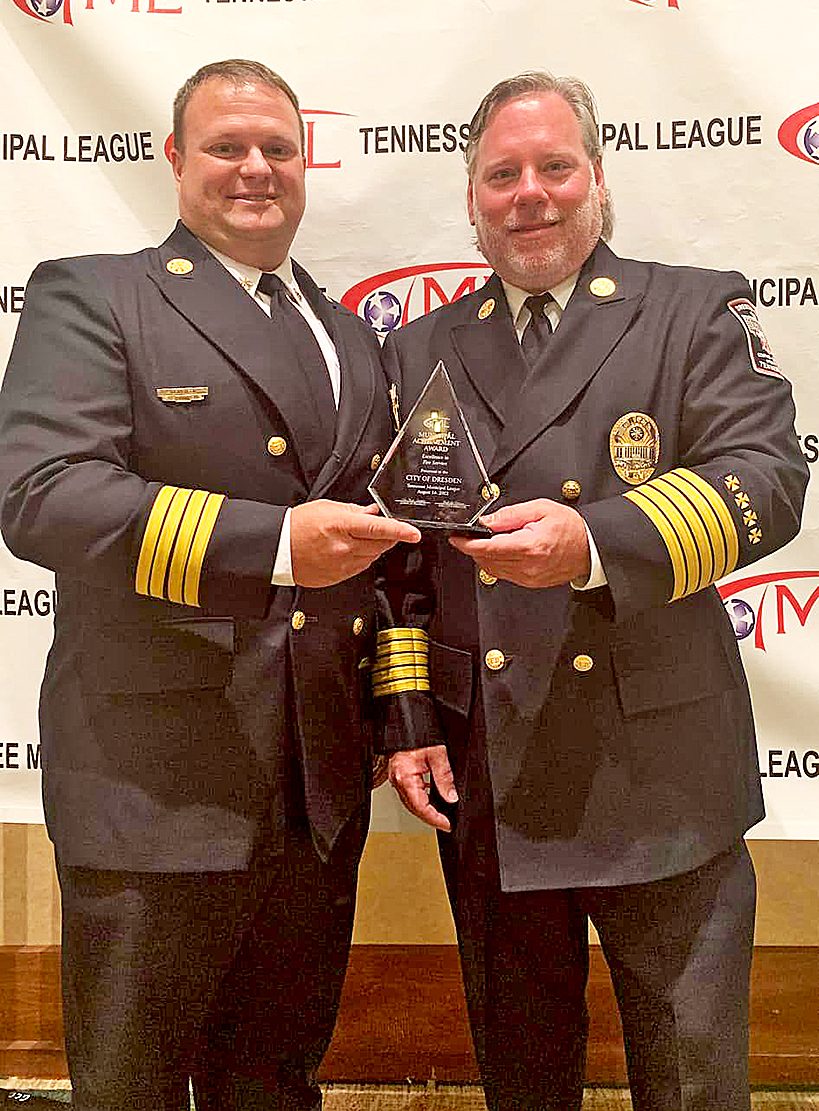 EXCELLENCE AWARD – (From left) Assistant Fire Chief Kory Green and Fire Chef Paul Hutcherson accepted the Award of Excellence in Fire Services for the leadership of the fire department after the December 10, 2021 tornado.

When fatal multi-state tornados struck Tennessee on Dec. 10, 2021, the city of Dresden was one of many communities left devastated by the storms, losing its city hall, police department, and fire department while still needing to provide services and aid in rescue efforts for citizens.

Foresight of local leadership, including Dresden Fire Department Chief Paul Hutcherson and Assistant Chief Kory Green, led to the Dresden Fire Department taking immediate action to relocate fire apparatus from the city’s centralized fire station in a move that would inevitably save both the equipment from a direct hit to the station as well as allow the city to still respond to immediate emergency needs in the wake of the storm.

In recognition of the work done by the Dresden Fire Department to continue to protect and serve their community while dealing with their own loss, the Tennessee Municipal League is pleased to present Dresden with an award for Excellence in Fire Services. The award will be presented Tuesday, Aug. 16, 2022, at the 82nd Annual Conference of the Tennessee Municipal League (TML) held at the Gatlinburg Convention Center.

With equipment located at various staging centers around the City of Dresden prior to the tornado, fire officials were able to not only save valuable equipment but to jump into action despite the destruction of the Dresden Fire Station in the storm. The department was able to retain a level of readiness to respond to the numerous emergency calls that followed.

While no lives were lost in Dresden, the EF-3 tornado that hit the city saw the loss of more than 200 homes and dozens of downtown businesses and infrastructure. Due to their planning ahead, the Dresden Fire Department was able to respond to their community in its hour of need.

Beyond allowing the department to respond to the immediate aftermath of the storm, the decision to relocate the city’s fire apparatus from the downtown fire station has had a positive long-term impact on the city as well. Despite their own loss, officials with the Dresden Fire Department continue to operate out of a loaned building while work is being done to rebuild the community and the fire station.

Dresden fire officials have been on hand as the days, weeks, and months of cleanup afterward have continued, showing that a fire department is more than a brick-and-mortar building but rather the people who are willing to put their own needs and lives at risk to serve the needs of the community above their own.

While no risk reduction efforts could have spared Dresden the impact of these storms, the actions of Dresden’s firefighters have shown a commitment to readiness, planning for response, and purposeful actions to maintain the ability to serve their community, even in the worst of times. They have exemplified the mission of the fire service.