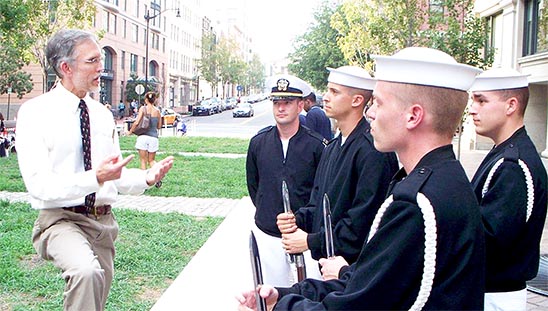 During his military career, 27th Judicial District Public Defender Joe Atnip served in the U.S. Navy from 1975-1978. He was a Squad Leader of the U.S. Presidential Honor Guard Drill Team at the White House, and has performed before domestic and foreign leaders at Arlington National Cemetery and before numerous civic and community organizations. Additionally, he has performed his rifle drill routine many times over the years at area schools and for other special patriotic events such as Veterans Day. More details about his years conducting drills and working with Drill Teams are mentioned in Part II of this article, which will print in next week’s edition of the Dresden Enterprise (Thursday, August 18, 2022).

DRESDEN (August 9) —Public Defender Joseph “Joe” Atnip, 67, of Greenfield, who decided not to seek another term of office, says he’s looking forward to retiring and enjoying the country life with his family.

After being elected public defender representing the 27th Judicial District in 1990, Atnip served four consecutive eight-year terms. He has the distinction of being the first attorney elected district public defender for Weakley and Obion counties.

In addition to serving as public defender, Atnip has served as Municipal Court Judge of Greenfield and Sharon.

Bill Randolph, who was elected Public Defender in the August 4 Weakley County General Election, served as Atnip’s assistant for many years.

“He will be an excellent district public defender,” Atnip shared.

“I was born in Memphis,” Atnip said. “My mother was a schoolteacher in the Shelby County school system, and my dad was a professor at the medical school. I grew up in Germantown, but, believe it or not, we actually lived on a farm. Obviously, that farm is long gone. There were five of us kids.

“I graduated from Germantown High School in 1973, went to Lipscomb for a year, dropped out and lived with an Amish family for a while, then joined the Navy.” He attended several different colleges before earning his Bachelor of Arts degree from the University of Tennessee at Martin in 1979; and graduating from Vanderbilt University School of Law in 1982 with a Doctor of Jurisprudence (law) degree.

“My wife, Kathy, is from Jonesboro, Arkansas. She’s an Arkansas State grad and got her masters from Ole Miss. She was teaching school in Memphis when my best friend fixed me up with her on a blind date.” They later married and currently reside on their farm near Greenfield.

Joe and Kathy have two daughters – Katie, 36, and Becky, 33; and three grandchildren – Lloyd, Dale, and Grace.

When quizzed about some of the most important and memorable events he has experienced in office, Atnip said, “The greatest honor in my career has been to argue cases before 12 citizens who have contributed their time to making our judicial system work. Many times, those citizens have had to make very difficult decisions. I don’t like to mention important criminal cases in my career where juries have had to make difficult decisions, because most of those clients are still living and they would just as soon everybody forget the whole thing.

“But you ask about important events in my career, so I’ll tell you about the time a Weakley County jury went against the biggest, most powerful company in the world at that time, General Motors. It was before I became public defender, and I represented a young lady in a civil case who had bought a lemon car and we sued under the ‘lemon law.’ GM sent lawyers from all over the country to fight us. There sat all those silk-stocking, high-priced lawyers and there Frances and I sat, all by ourselves. Well, we also had 12 Weakley Countians there in the courtroom with us, and so we whipped GM. Working before a jury is the greatest honor any lawyer can have.”

In response to the question, “Why do we need a public defender?” Atnip said, “The criminal defense lawyer is one of the few jobs actually mentioned in the Constitution. Our whole judicial system depends on the criminal defense lawyer. And it’s not enough that we are just present in the courtroom, holding our client’s hand. We have to be good at what we do. We have to investigate; we have to prepare; we have to be creative. And when we get to the courtroom, we have to be zealous. We can’t just roll over and let the chips fall where they may. It is remarkable that everybody around here apparently respects the fact that we’ve got a job to do, and that we intend to do it well. Not once in all these years have I had a victim or a victim’s family member confront me. Not once.”

In answer to the question, “How do you represent someone that you know is guilty?” Atnip replied, “Our goal usually is not to get the client off scot-free. When we know beyond any doubt that our client is guilty, our goal is to make sure that his punishment is fair and appropriate. But I am very careful not to presume someone guilty even if the evidence appears to be overwhelming.

“Once I was as convinced as the police were that my client was guilty, and it was only half-way through the trial that I realized that he was innocent. The jury took 15 minutes to come back with a not-guilty verdict. If I had not been zealous in cross-examining the state’s witnesses, an innocent man would have gone to prison for a long time. Which brings to mind what is said in Proverbs 18:17, ‘The first to plead his case seems right, until another comes and examines him.’

“In fact, it is usually the innocent client who makes this job as difficult as it is. If we know before trial they are innocent, we agonize over our preparation. They are the reason I turned gray before my time. Yes, the completely innocent are a small percentage of our clientele, but even if they are only, say, one percent of those we represent, that one percent can add up and can make our job very challenging.

“Of course, many of our clients are guilty of something, but they may not be guilty of exactly what they’re charged with, which is why much of our job involves not just showing a jury the facts and letting them decide the proper charge, but negotiating with police and the district attorneys to try to find common ground. If we had to go to trial on every felony charge, the jury pool in these two counties would revolt. And by jury pool, I mean every law-abiding citizen out there who might get called to jury duty.”

See conclusion of article in next week’s edition of the Dresden Enterprise, Thursday, August 18, 2022.