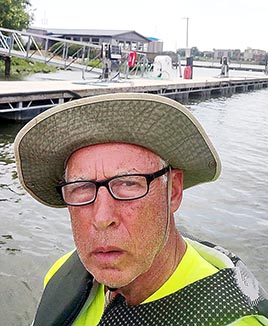 Greenfield resident, small business owner and frequent Enterprise guest columnist recently participated in the Tennessee River Run, also known as Tennessee River 600, where he rode a jet ski with other water enthusiasts over the course of five days covering 600 miles of water. He snapped this selfie at a fuel stop in Decatur, Alabama.

Some of you may know that I just completed the jet ski ride from Knoxville to Paris landing. It is called the Tennessee River 600.  That’s because we cover about 600 miles over 5 days going through eight dam locks. This is the 26th year it has been done, but my first time. It was quite an experience that will probably be repeated. There were about a dozen Canadians and people from California, New York, Georgia, Ohio, Indiana and, of course, Tennessee. Quebec was the home of several aye. Not many rode double and about 40 percent were women. There were 65 personal watercraft (water scooters or jet skis) in total.

The first three days, the water was rough and the last two, smooth. It rained on us three times and I just slowed down until it quit stinging. It seems that I am slower than the fast ones and faster than the slow ones, so I found myself riding alone sometimes for an hour or two. Fuel was needed once or twice a day and some of the marinas were back off the channel. Luckily, there was someone around to help me find those.

I did meet lots of people on the trip. Two in particular were the two TWRA officers that went with us down the river. They helped us get through the locks and were there to render aid if needed. Plus, they were just great, all-around guys to get to know. We stayed in hotels on the river each night. Two places fed us dinner. The two from California stopped in Arizona and bought two used jet skis, sight unseen, and rode them. I considered that pretty risky. Then, one guy bought a brand new one that quit the first hour. But we had an extra one, so he got to ride.

There was a crew that took our luggage from one hotel to the next every day. That helped a lot, so we could ride without a lot on the ski. I will say the Tennessee River is such a valuable resource and people flock to it in droves. The influence on the state’s economy cannot be overstated. There seems to be no barge traffic on the upper Tennessee River. It could be, but I saw very few places that needed barge service. It left me with memories of a great trip. The first three days were very rough water and the last two very smooth. All in all, a good way to spend a week.

Editor’s note: Greenfield resident Keith Tucker is a guest columnist for The Enterprise and owner of The Marble Shop.