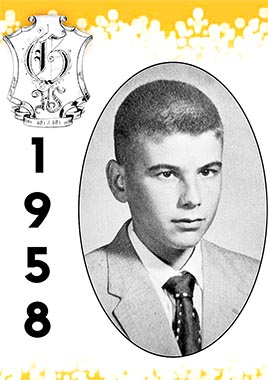 John Allen Reed was born September 12, 1940, in McKenzie, Tennessee, to Bob and Hazel Jennings Reed. He has one brother, James. The Reeds were a farming family and John Allen has lived in Gleason all his life. He has attended Union Grove Baptist Church and New Valley Methodist.

He attended his first three years of school at Union Grove School where his teacher was Mrs. Gertrude Vaughn Adams. Other classmates at Union Grove were T.W. Montgomery, Larry Aylor, Patricia Aylor (Woodard), John Perkins, and the Vaughn boys. He walked one mile to Union Grove.

One of the Gleason teachers came to his house and asked if John would want to attend school in town. He, along with his friends T.W., Larry, and Patricia, then switched to Gleason School. John started at Gleason in the fourth grade in 1949, where he spent the rest of his school years. That first year, he had to walk one mile to catch a bus to Gleason. In the following years, the school bus came to his house where it turned around. His friend throughout school was Larry Aylor.

John Allen graduated with his classmates in 1958, after which he and David Belew joined the U.S. Army together. They received basic training at Fort Chaffee, Arkansas, then were stationed at Fort Carson, Colorado, and Fort Lewis, Washington. He was a cannoneer, manning a 155 Howitzer.

After the military, John Allen worked for Tri-County Motors in the office, until taking a job with the U.S. Postal Service in McKenzie. He retired from the post office and still lives at his home, enjoying his gardening.