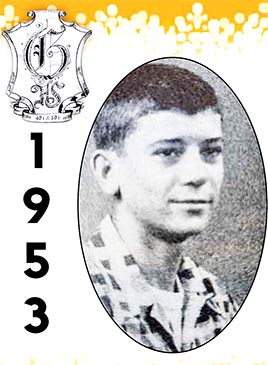 Jim was born to Harold Gray and Rubye Lavada Sharp Bradberry on January 25, 1936, in Lansing, Michigan, at Lansing General Hospital. Jim’s dad was working for General Motors at the Fisher Body plant. His family rented rooms from Bill and Edna Bullock Heath at the time. Edna was Jim’s dad’s second cousin, as their Bullock grandparents were brother and sister. They had lived with the Bullocks for about a year and a half when Suzanne (’58) was born. Jim remembers going with his parents to see Suzanne in the newborn nursery, and standing in the hallway and viewing their new baby girl through the glass.

Jim went to kindergarten in Lansing. They moved back home to Gleason in time for him to start first grade at Parks School, where his teacher was Miss Annie Laura Phillips. The principal was Mr. Worth McCain, whose daughter, Ann, was in his class. Jim and his cousin, John Robert Hodges, walked to school together. At the time they were both living with their grandparents, John Henry Bradberry and Mattie Moore Bradberry, in the Sand Hill Community. Jim’s family lived with his grandparents for a year after they had moved back home. John was there to help their grandfather on the farm as the seasons demanded.

Jim particularly enjoys remembering his first and last dates in high school. His first date was asking Joyce Nell Upchurch (Watts) to be his guest at the football banquet in 1951. His last date was with Bobbye Lu Smyth (Robison) on graduation night.

Another memorable date was when Edmond Stewart asked Rubye Frances Trevathan (Snider) out on a first date. He asked Jim to go with them. Jim called Peggy Sue Fanning (Dunn) and asked if she wanted to go to Dresden to the movies. Edmond picked them up and they started off for Dresden. Rubye said she did not want to see the movie in Dresden, but would rather go to McKenzie, so the plans changed. When they got to McKenzie, Jim checked his funds as he was not expecting to pay because he had two free passes to the Dresden theater. He leaned over to Edmond and said, “I don’t have enough money.” Edmond slipped him a quarter, so with the twenty cents he had, he had enough to buy two 15 cent tickets and two nickel bags of popcorn.

Jim’s best friend in high school was Joe Denning. He was also good friends with Rubye Frances Trevathan (Snider), Cody Adams, Little Jack Dunning, and Lyndell Beasley, who were all in his Class of ’53. Lyndell actually lived with him in Michigan for a while before his wife Mary Margaret Martin Beasley came up to join him. Rubye Francis wrote in his annual, “Jim, you are a good Cupid,” as Jim played matchmaker in her dating relationship with Billy Snider, later to be her husband.

Jim went to look for work in Lansing, and lived with his Uncle Paul and his wife, Ann. He could not get a job as no one would hire a 17-year-old, so he came home and waited until he turned 18 the next January. He then returned to Lansing and was hired to work at Fisher Body where his dad was working. He stayed there full time for five years. He then started his college career at Michigan State and continued to work at Fisher Body during the summers. Jim lacked 17 credits to graduation when he quit to get married. His son, Darin, was born November 24, 1965.

Jim had moved to Flint by this time and was working for the City of Flint in the assessor’s office. From there, he started his own business building residential homes. They were living in Flushing, right outside Flint. He had just started a new business in 1974 as a licensed real estate broker and builder in Flint when he took a fateful trip home to Tennessee to visit his parents. He and Darin drove to Gleason to spend a few days with his mom and dad.

Jim was working at his parents’ home to complete some needed repairs when his cousin, Roy Lee Hodges, drove up with his nephew, 16-year-old Gaylord, and said, “Come on. Let’s go hunting.” Jim got his gun and joined them in the car along with his son Darin. Roy Lee was teaching Gaylord to hunt quail. He demonstrated how to aim at the birds as they were flushed and follow them up, aiming slightly ahead. Gaylord was following instructions and pulled the trigger. The hunters were in a line walking across the field. Gaylord was focusing on the birds and did not see that Jim was slightly ahead. He fired at the bird he was tracking, and Jim was in the line of fire. The shotgun pellets hit Jim directly in his face. Fortunately, his son Darin had gotten tired and already gone back to the car.

Jim was rushed to the hospital in Memphis, where doctors told him that he would heal following surgery, but that his eyesight could not be saved. He was permanently blinded. When Jim healed enough to travel, he returned home to Michigan. He then returned to school and started to examine career options. He knew he faced a career change. He decided that he would go to law school. He finished the 17 credits he lacked from his undergraduate studies and graduated from Michigan State University in August of 1976. He went on to get his law degree from Cooley Law School in Lansing in the spring of 1979, passing the bar that October. While Jim was in law school, he rode back and forth to Flint with Bill Housefield, and they became good friends. Their friendship continues to this day with visits, vacations, and frequent phone calls.

Jim had always wanted to move home to Tennessee. His dream was to open a law office in Dresden where his uncle Homer Wesley Bradberry (’31) practiced and had long been a judge. Jim moved to Dresden and went into practice with Alan Strawbridge. They shared an office for two years before Jim started his own practice in 1981. He has lived in Dresden and practiced law there since. Jim has been the Juvenile Court judge for 42 years since February of 1980. He was elected to his sixth term of office in November of 2021.

In 1984, at his GHS class reunion, he met a beautiful young woman, Wanda Maddox Hayes (’64), who was attending with her uncles, Dickie and Bobby Brawner. She had been only 7 years old when Jim left Gleason. Wanda was living in Jackson and working at The Jackson Clinic. A friendship ensued and they have been best friends since. Wanda left the Jackson Clinic in 1990 and went to work at Bradberry Law as Jim’s assistant. Wanda terminated her position as Jim’s assistant in 2002 and began to care for his elderly parents who had moved into his home until they died. She continues to be the important person in Jim’s life.

Jim’s son Darin, who is an artist, potter, and woodworker, lives in Dresden. His grandson, Aaron, who grew up in Jim’s household from the age of three, lives in Nashville. Jim is understandably proud of his children. Jim counts his church as the most formative and sustaining force in his life. He has been a member of Martin Church of Christ since 1982.

At age 86 years, Jim maintains his law practice, Bradberry & Pemberton, in Dresden, and continues to preside over the Juvenile Court in Dresden. He loves to reminisce about growing up in Gleason and all the wonderful friendships that were formed at that time.