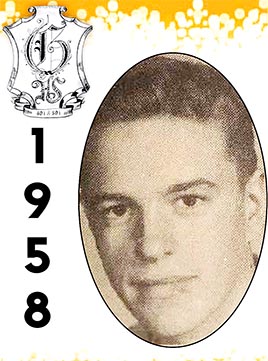 Robert Lee Stallcup was born to Alpheus “Pete” Stallcup and Irene Sawyers Stallcup on August 29, 1939, in the Sand Hill Community out from Gleason, Tennessee. His siblings were George, Dottie, and Jean. His parents were hard-working people who moved back and forth between Gleason and Lansing searching for work. During this period there was little work in rural areas of the south, and jobs and finances were much better for the family up north.

Though born in Gleason, Robert attended kindergarten and first grade in Lansing, Michigan. He moved back to Gleason in the second grade. Robert always attended country schools when in Gleason. The family lived on Highway 22, and Robert rode with his brother George to school. Always one with high ideals, he remembers thinking as a third grader, “I’m smart.” Even now, educators realize that if this belief will manifest in their young students, achievement comes handily. Robert’s family returned to Lansing for his seventh-grade year.

Robert remembers hard times growing up as a sharecropper’s son. He was driving a tractor by the time he was 11 years old. He believes that being poor helped him to grow up quicker. Like others of that time, Robert had to work hard for anything he had. “Coach Dudley Sanders helped me to get a pair of used football cleats by allowing me to come up with $3 and a used baseball glove. I played little league baseball, basketball, and football.”

Robert remembers with fondness attending Gleason School in the eighth and ninth grades, especially boxing at recess. Though the school did not offer boxing as a class or sport, it did have some boxing gloves so the kids would box. He recalls that he always got paired with a bigger kid but could usually do well because he fought with his older brother.

Robert also recollects possum hunts, trips, and his first airplane ride, courtesy of a great mentor in the Gleason First Baptist Church. Some of his best times were hours spent in the attic of the home of Principal Charles Van Butler and his son, Michael, who was a good friend in school. Robert at first felt uneasy about being in the home of the principal, but grew to love his visits there. He learned Mr. Butler was a master woodworker, and in turn he taught Michael and Robert those skills. Over a two-year period, they built sets and stations out of plywood and painted them for the 12 or more electric trains that ran in the attic. He credits this as the start of his love for building.

Robert especially remembers Mr. Leland Lemonds with fondness. He relates a story about a time when Mr. Lemonds had stepped out of class and Robert picked up the broom and started playing a pretend guitar. He was the only one in the class who did not know that Mr. Lemonds had stepped back inside the classroom. Mr. Lemonds set him down in his desk and his shirt was ripped during the incident. Mr. Lemonds said, “Robert, maybe we can talk now.” Robert replied, “Mr. Lemonds, you tore my shirt.” Mr. Lemonds did not think that he had torn the shirt, but, as one would expect of ninth grade boys, several chimed in, “Yes you did, Mr. Lemonds.” That was just before all those vocal spectators joined Mr. Lemonds in the cloakroom.

As a ninth grader, he and Bobby Mansfield just walked out of class one day to find a job. They went to work treating pipes for the Texas Gas Company. The boss was Delma Loys Vaughn whose son, Jack, was a good friend. It was a dirty job. The pipes had to be treated with fiberglass and tar to shield them from the natural electricity in the ground. Robert, who always looked older than his years, became the foreman at Texas Gas before he was 16. “I made 75 cents an hour.” He also joined the National Guard at the age of 14, and after 8 years was discharged, earning the status of veteran. He later got his GED.

He met the beautiful June Scott from Jackson and began dating her. After some time, he moved to Lansing and worked for a while as an optician. During this time, June’s family moved to Chicago. After much letter writing, on March 8, 1957, they married in Corinth, Mississippi, when he was 17 and a half and June was 19. They drove to Corinth with June’s mother and grandmother, who were witnesses for the wedding.

Robert got a job as a city truck driver with UPS at 19 years of age. He took Jimmy Richee’s place when Jimmy was transferred to Memphis as a salesman for Knotts Foods out of Paris. He and June moved to Memphis in 1961 when he was 22, and later he purchased his own truck. He won the state championship truck driving award with an 18-wheeler for two years, and was awarded the runner-up another year. A special memory is when he was about 35 years old and still driving in Memphis, he had the opportunity of delivering President Jimmy Carter’s luggage and getting to shake his hand. He was later a city trucker for Gordon Truck Lines (Saia in ’83), “I owned my own truck and contracted with them as a driver/ salesman making good money.” He also worked in construction and remodeling, and always had a job going either in trucking or building. Robert and June lived in Stanton, outside of Memphis.

Robert and June had a wonderful marriage until her death in 2018. “I lost June three years ago. We had her service at the funeral home in Gleason. She is buried at Hopewell. We had a real good life. She was always beautiful inside and out, and she was all her life. Everybody loved her.”

When the Ford Motor Co. and SK Innovation announced the location in West Tennessee for their $5.6 billion investment, it was near Robert and June’s farm. He sold his land to a woman from Pennsylvania who wanted to live on a farm for $1.8 million, and relocated to a house in Arlington, where he has two acres. “But the best part of the story,” says Robert “are the three children – Robert Lee, Jr. (Butch), Belinda Gaye, and James Darrell, nine grandchildren, and four great-grandchildren.” He is very proud of them and their accomplishments.