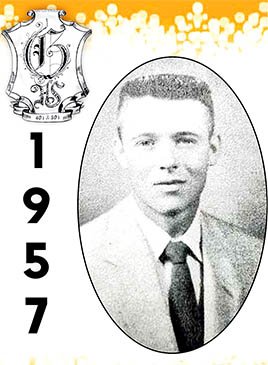 Thomas Edwin Fisher was born at home to Mary Alice Drewry Fisher and Thomas Raymond Fisher on June 20, 1939, on Liberty Road in the Hilltop community southwest of Gleason, about a mile from Pillowville. A country doctor came to their home to deliver him. Tommy was joined 14 years later by sister, Carol Ann, to complete the family.

Tommy carries the given names of both his maternal and paternal grandfathers. Tommy’s grandfather had moved his family to the Gleason area in 1937 out on Pillowville Road, within three miles of the family’s new home. They grew up with family and friends surrounding them in a close-knit community.

Tommy’s ancestor, Richard Drewry, served two six-week terms as a soldier in the Revolutionary War. For that service, he received a land grant in West Tennessee. His eldest son inherited the land and bought out the younger brother. With that money, he headed to West Tennessee. Many of his descendants continue to call Weakley and Gibson counties home.

When Tommy was three years old, his father was hired as a mechanic at an Air Force training facility in Union City where fighter pilots were trained. Fats Everett was the plant manager there. The war was on, and everything was rapidly changing. The family moved to Union City and lived there until when he was five. The war was winding down in 1944, and the facility closed.

Tommy spent his growing-up years in the Hilltop Community. Their home was wired for electricity in 1948. They had a well for water and an outhouse throughout his years at home. The whole family had their assigned chores. On their 20-acre farm, Tommy milked cows and goats, fed hogs, worked with his parents in their big garden with a pea patch, watermelon patch, cotton patch, and corn patch. There was always plenty to do to keep a young man busy and contributing.

Tommy went to first grade at Spears School on the other side of Cotton Creek, where Darris Nanney was the teacher. Mr. Nanney was also a local farmer. For second grade, although bus service had started, he did not ride the bus to Gleason School. Instead, Tommy attended Ward’s Chapel/Masonic School through the sixth grade. Tommy’s mother and all her Drewry brothers had attended school at Ward’s Chapel in their time. Ward’s Chapel was a two-story building built by the Masons. The fraternal organization held its meetings upstairs, and the school was on the first floor.

Mrs. Sheila Barner Martin was his first teacher at Ward’s Chapel, followed by Worth McCain, who brought his daughter, Ann, with him every day. Lloyd Delaney also rode to school with the McCains. Mrs. Lenora Williams Bradford taught school there when he was in fourth grade, the year Tommy got a job building the fires at school, “I lived close to the school and could get there early. Mrs. Bradford talked to Daddy, who said, ‘Tommy is a responsible person and can do it,’ and I did every morning at 6 a.m. for the rest of my time there. She paid me 50 cents a week.” Tommy had the building warmed up for the other children when they arrived. In seventh grade he started riding the bus to Gleason.

Following his first paid job building the fire at Ward’s Chapel, Tommy had a variety of jobs, some for pay and others to help out with family endeavors. He remembers fondly the three years when he was 11, 12, and 13, his parents operated Hilltop Grocery Store.

In eighth grade, Gilbert Perritt ’57 and Tommy were offered jobs at Gleason School. Happy to have the opportunity to miss study hall, they mopped the floor in the cafeteria, picking up each chair and placing it on the table. Then they would wait for the floor to dry and then replace all the chairs to be ready for the next day’s lunch. Ms. Olive Duke and Mrs. Annie Wiseman, who ran the lunchroom, were so good to all the kids who worked there that they all loved being there. They got lots of positive feedback from those ladies, not to mention all the extra helpings and treats. Tommy and Doyle Connell (’56) were hired to sell ice cream to the children who had a nickel or dime. They could buy a fudgesicle, ice cream cup, or chocolate coated ice cream bar for a nickel, and for a dime they could get an Eskimo Pie. The kids would line up and those who had money would raise their hand. Tommy and Doyle would carry a basket down the line and each child would get what they wanted. Doyle was the manager, so he was paid 50 cents, 25 for his lunch and 25 for being manager. Tommy worked for two hours for a quarter, which bought his lunch.

Doyle Connell was also a very talented piano player. Hugh Gordon Stoker was, at that time, with the Jordanaires, which later became Elvis Presley’s backup group. Hugh Gordon would get Doyle to fill in as their piano player from time to time. When he was a senior, Hugh Gordon asked him if he could travel with group. Mr. Moore thought this was an opportunity too good to miss, so he secured permission for Doyle to test out of his courses. The teachers were happy to do the extra work to help him take advantage of this wonderful opportunity. Doyle played piano with the Jordanaires for two years.

Tommy majored in agriculture, which he took for five years (Grades 8-12). He remembers Mr. Harold Pinkley, who was his Ag teacher for three years, as one of the best teachers he ever had. They had six weeks in the classroom and six weeks in the shop gaining hands-on experience. He had forges, lathes, metal working equipment and many other things that these guys had never seen. “People would bring in their tractors for us to work on. I built a trailer for us. We would go out and castrate pigs and clamp bulls to prevent the production of testosterone, and make them like steers. We learned so much from that man about the practical aspects of farming.”

In his senior year Tommy was the secretary of the FFA, which was a big thing at Gleason School. “Mr. Pinkley stressed Roberts Rules of Order, which we studied in depth. Every year, Mr. Pinkley would select a team to go to the district competition. My senior year it was held in Puryear. When Gleason won the competition, Mr. Pinkley was so excited about the win that he told the team he would take us to celebrate by going out for a steak dinner. He took us to a new steak house in McKenzie and we all ordered a steak. I had never been to a restaurant for a steak dinner. When the steak arrived, I was shocked to see this slab of beef. The only steak I had ever seen was battered and fried. I did a good job with my first steak in spite of my initial surprise!” This first experience with a grilled steak was not Tommy’s last.

A story Tommy has enjoyed telling over the years is about his experience at the fanciest meal he had ever had, “As the district winners of the Roberts Competition, the team went to Jackson to compete in the regionals. We came in third place there. As a result of our placement, we were invited to the Top Crop Banquet and Awards Celebration at the Peabody Hotel in Memphis. I was mightily impressed with the Peabody, the banquet hall, and all the finery and food. One of the officers on the team could not make the trip, so Joe Tuck was asked to fill in for him. There were baskets of hot rolls on the table. I said, ‘Tuck, pass the biscuits.’ Joe leaned over and whispered, ‘Fisher, they’re rolls.’ It was quite an experience for a country boy to be invited as a special guest to an event like that.”

Mr. Pinkley was there for only a few years before moving home to Humboldt and founding a successful insurance agency. His impact during his few years in Gleason was profound for Tommy and many others who learned from him.

After graduation in 1957, Tommy moved to Memphis to find work, staying with his mother’s sister while he was on his job search. Jerry Dunn (’54) and Jimmy Richee (’55) were working at Muller-Reeves Optical. Junior Summers (’55) was working at Southern College of Optometry in the same field. One weekend Tommy rode home with Jerry, who told him about an opening there. Tommy interviewed and was subsequently hired by Muller-Reeves.

While working at Muller-Reeves, Tommy’s boss asked him if he would like to fill in for a guy on their bowling team who was sick. Tommy said he would. While at the bowling alley, Tommy met a lovely girl, Marcia Manis, who would be the love of his life. They married that same year on August 31, 1962, and have been happily married for 60 years come August. They have raised three wonderful and responsible children, and have three grandchildren. They lost one daughter. Their son lives in Memphis, and daughter lives in Madisonville, Louisiana. The grands are in Dallas, Atlanta, and Washington, DC.

Tommy and Marcia, both licensed opticians, founded Fisher Optical in 1965. They sold out to a national chain in 1987, but kept the original location changing the name to Mid-City Optical. Mid-City closed in 2017. Marcia fits and dispenses eyeglasses at St. Jude Eye Clinic, and Tommy continues to operate a lab out of their home. They continue to live in Memphis. Tommy loves Gleason and all his old friends from there.