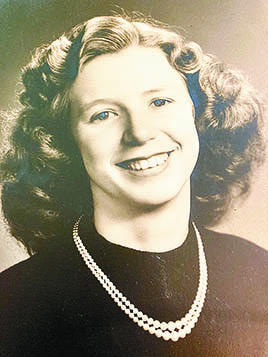 Carolyn June Jackson was born on July 14, 1931, in the Beech Springs community out from Gleason to Relma Foster Jackson and Hayes Jackson. “I was born on my Grandaddy Jackson’s birthday.” Four years later, she and older sister, Wilma, welcomed baby brother, Paul Joe ’56.

Carolyn has wonderful memories of growing up in Weakley County. “I had a good mother and daddy,” she said. “We lived within walking distance of both sets of grandparents, Alice Bradberry Jackson and Will Jackson, and Lara Mitchell Foster and Will Foster, who lived in the Seminary community.” Her Foster grandparents ran the area’s party line telephone; the switchboard was located in their house.

Carolyn started at a country school called Jackson’s Academy. The teachers were Mrs. Mary Brown Parham and Miss Annie Laura Phillips, who taught all eight grades. She also had Ms. Maggie Lois Finch Hearn as a teacher there at one point.

Carolyn’s father was a farmer. He also worked on Saturdays at U-Tote-Em for Mr. Hulon Morris. The children went to school and worked, then they came home and worked. They chopped cotton, dug potatoes, and helped milk the cows daily. They milked cows for family use and to sell milk to neighbors, putting the milk in a bucket down in the cool water in the cistern.

Carolyn’s family was the first to get electricity in the Beech Springs Community. “Daddy had bought a refrigerator several years earlier anticipating the arrival of electricity, but it took a while longer than anticipated to get the electricity wired in. So, we had a refrigerator, but no power to run it. Daddy temporarily loaned the new refrigerator to Uncle Woodrow, Daddy’s brother, until they got electricity to our house about a year later. In the meantime, we continued to put the milk in the cistern to keep it cool and purchased our ice from town to cool our drinks.”

Mr. Robert Delaney (Harold’s father) came once a week in his buggy to collect their order for ice. He went to each home in the communities around Gleason and took everyone’s order. Mr. Delaney would then go into town and pick up the ice and deliver it right to their house. It came in blocks of 50 pounds. Depending upon the family’s needs, they would order one or two blocks. The Jacksons did not have an ice box. They had to wrap the ice in burlap and put it in sawdust to keep it frozen. They would then use an ice pick to chip off enough ice to cool their drinks. They had to rinse off the ice each time to get the sawdust off.

The Jackson family went to Beech Springs Baptist Church. Carolyn was baptized as a child by the minister from Beech Springs in Leonard Bynum’s Lake, along with 10 to 15 other young people: Bobby Esch, Rosalee Grissom Snider, Jack Bouldin, Martha Jean Connell Hagler, and others were some of those who were baptized with her.

In seventh grade, Carolyn started at Gleason School. The principal was Mr. Charlie Butler. Mr. Wendell Reed was the science teacher and her class sponsor. Mrs. Estelle Holmes Bobbitt was her English teacher.

Ann Haynes Phelps, Fay Jones Campbell, Edith Garner Fowler, Roberta Fowler Vedder, Sarah Ann Collins Gallimore and Carolyn were all good friends from childhood, and remained so. None of them had a way to go to ballgames in Gleason.

They rode the bus to school. A bunch of kids from the neighborhood would walk to the corner by Beech Springs Baptist Church, Rosalee Grissom Snider and the Parks boys, Carolyn remembers. They would stand at the corner to wait for the bus. Fred Grissom, Rosalee’s dad, and “Grease Monkey” were the bus drivers. Carolyn doesn’t know Grease Monkey’s real name. All she ever heard was “Grease Monkey.” If anyone knows the identity of “Grease Monkey,” please share with us.

Carolyn met Wilton Elliott after she had graduated from GHS in 1950. They dated for that year, then Wilton was drafted into the service. After a year, he came home, and they married in 1951. The newlyweds moved to Chicago. For 12 years she worked at Ace Fastener: “They made the staplers upstairs and we made the staples downstairs.” While Wilton worked primarily with Southerners, most of the people that Carolyn worked with at Ace were German. They did not speak much English. After they trained them, the boss paired the German-speaking employees with English speakers so they would not speak in German all day and could learn better English.

By that time, they had a daughter Kathy who was turning school age. Carolyn and Wilton wanted their little girl to go to school at home, so they moved back to Gleason. They bought their home on Mill Street next door to Nell and Tom Poyner, and later the Mansfields were dear neighbors. Mr. Albert Clement built the house in which their daughter grew up, and where Carolyn has lived ever since.

Carolyn and Wilton’s only child is Kathy June Elliott Hopper, born in 1962. Kathy graduated from Gleason High School in 1980. She is married to Greg Hopper and lives in Huntsville, Alabama. She has given Carolyn two wonderful grandchildren, David Hopper (Laura), who is an engineer, and Kayla Hopper Guyette (Matt), who is a Nurse Practitioner; and two great-grandchildren: David’s daughter, Stella (age 5), and Kayla’s daughter, Clairi (age 8 months).

Wilton died suddenly in 1977 from a massive heart attack, and is buried at Hopewell. Her sister and brother also passed away. But Carolyn has always loved Gleason and her friends there; Billy and Virginia Verdell were Carolyn’s dear friends for years. She misses Virginia greatly and appreciates Billy’s continued friendship. Sarah Collins Gallimore, Ann Haynes Phelps, June Sugg Cosby, Julia Lemonds Fowler, and Julia Campbell Sawyers all ran around together for a lifetime. Three have sadly already left, and three remain, still, best of friends.