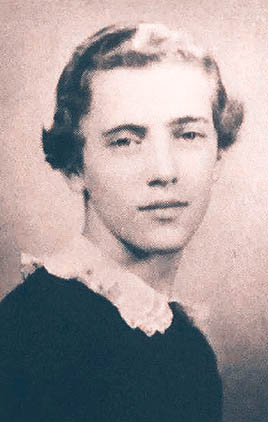 Jennifer Calene Johnson was born on September 30, 1937, in Holdenville, Oklahoma, the fourth child of Willie D. Johnson and Bertha Mai “Birdie” Trevathan Johnson. The family had moved to Oklahoma is search of work during the Great Depression, at time when life was hard, and work was scarce. Willie D. had secured a retail job as a shoe salesman there.

When Jennifer was a year and a half old, the family moved back to Gleason, Tennessee, where they lived in a small house on West Street. While a larger house was being built on an adjacent lot, they temporarily lived in a concrete block house that consisted of one big room. The family later lived on Phelps Street.

Jennifer’s childhood in Gleason was filled with the wonderful influence her grandparents had on her life. Her grandmother Maggie Johnson lived just across the backyard, so Jennifer was able to spend a lot of time with her, which she really appreciated.

Jennifer’s school experience started when she was five years old. Her mother Bertha was teaching piano at Gleason School and since Jennifer was the not old enough to officially start school, her mother would take Jennifer with her when she taught. Mrs. Virginia Edmonston Smith graciously invited Ms. Bertha to leave Jennifer in her classroom during those times. So, Jennifer spent much of that year in Mrs. Virginia’s class. Then, because Jennifer had essentially completed first grade, Mrs. Virginia suggested she skip first grade and start in second. However, her mother wanted Jennifer to start with the children of her own age so basically, she took first grade twice without having failed it.

One of her fondest memories is of Mrs. Annie Edwards Wiseman’s peanut butter cookies. They were the best, and to this day she hasn’t had better ones. Lunch at school then was 20 cents, but Jennifer found a way to save some of that as many days she would walk across the street to Cletus Trevathan’s store where she could get a large slice of cheese or baloney on crackers for a nickel and a coke for a nickel. This left a dime to save for college.

Her summers and daily life were filled with books and work. She loved learning something new, and was a voracious reader, mainly history and biographies. Mrs. Pearl Downey Bennett, who was Gleason School librarian, encouraged Jennifer by allowing her to read new books before she placed them on the shelves. Jennifer remembers reading a particular series of orange covered books which were biographies of the presidents and first ladies. Reading to Jennifer was meant to be a learning experience.

Life was good, but then tragedy struck. When Jennifer was 11 years old in 1950, her mother died at just 40 years old of heart damage from having rheumatic fever as a child. In the spring of 1951, her grandfather Oscar Johnson died. At that time, Jennifer went to California and lived with her paternal aunt for 15 months, where she finished sixth and seventh grades. During her time there, her father remarried, and Jennifer subsequently gained three half-brothers and a half-sister. She returned from California in time to start eighth grade in Gleason.

Jennifer already knew at the age of eight that she wanted to become a doctor. To achieve those goals, she knew she would have to not only work hard, but save money for college. Her first job was picking strawberries when she was four years old. Her father made her a smaller carrier that would hold four quarts of berries. She pulled potato slips, and even had her own acre of cotton that she chopped and picked herself till it produced her a whole bale of cotton. She split stove wood.  She mowed yards, three years with a reel-type push mower, and then three years with Sears’ first power mower, which turned the blade while she pushed! She also worked at the café located underneath the old hotel, and made 15 cents an hour. She could have one meal free, always a hamburger and cherry milk shake.

So, as she started high school, her main purpose was to pursue her goal of becoming a doctor. She knew she had to excel in school to get into college. Her grades were always in the high 90s, although the term GPA wasn’t used nor calculated as it is today. Jennifer was salutatorian of the 1957 class. The teacher who most influenced Jennifer was Mrs. Estelle Holmes Bobbitt, who was the epitome of dignity. She commanded respect from her students and got it. She and Jennifer remained friends and corresponded until Mrs. Bobbitt’s death.

After high school Jennifer was accepted to Lambuth College in Jackson, which was a highly-regarded school. She had some scholarships, worked in the school cafeteria breakfast and lunchtimes, and at Jackson-Madison County Hospital in the evenings. She graduated in 1961 with a Bachelor of Science degree.

Jennifer was accepted at UT Medical School in Memphis, one of only four women admitted out of a class of 56. She was a medical student when President Kennedy was assassinated and remembers that day vividly. Everything stopped for days. She never had to repeat a class, so after 39 months she graduated medical school in December 1964, which was the usual pattern at that time. Jennifer is likely the first female graduate of Gleason High School to become a doctor.

She started her internship January 1965, completing it December 1965. In order to enter residency, she worked for six months as attending physician at West Tennessee TB Hospital caring for active tuberculosis patients. In July 1965, she entered her residency in internal medicine at UT, working at the old John Gaston Hospital. She was the senior resident on call the night Martin Luther King was assassinated. She was informed before the public so she could help the hospital prepare for whatever would come. Jennifer completed two years of residency and one year of infectious disease fellowship there.

In 1968, she moved to Augusta, Georgia, to assume the position of chief resident of internal medicine (1968-1969). She then did a fellowship in cardiology (1969-1971), and remained on the faculty there until late 1973. She then moved to Louisville, Kentucky, to join the faculty of the University of Louisville Medical School in January 1974. While there, as professor of medicine she taught medical students during each of their four years, directed the residency program for University of Louisville, and served as chief of internal medicine at the VA.

Jennifer moved back to Jackson in 1990 at 50 years old and began private practice at The Jackson Clinic, retiring in 2012. She reports one thing she was most proud of in her medical career was setting higher standards for doctor’s visits in the nursing homes of the area. She found great joy in listening to her nursing home patients and providing them the very best care she could give.

There was some fun involved in all this learning in Jennifer’s life. She took up running at age 40, competing in the Tater Town 10K race during the 1979 50-year celebration of the school, and kept running for 37 years. Jennifer got into woodworking, making wooden toys. Her father taught her how to use tools and gave her some of her first ones. Obviously, she acquired some skills early in life from her father who was an accomplished carpenter.

Jennifer discovered that she could tell a joke, so she became a stand-up comedian. Folks loved to hear her good old southern accent. She has traveled to Mississippi, back to Kentucky, Alabama, and from one end of Tennessee to the other telling her jokes at medical events, church events, and any other group that would like to hear good old “clean” jokes.

She attributes her success in life to hard work and teachers who recognized she was willing to go the extra mile to succeed, “Our teachers expected success and made sure you had the tools to achieve that success. They did not accept work half-done, if they knew you were capable of doing better. They recognized my ability and desire to become a success in life. They knew I had to become person I wanted to be, and they pushed me to reach my goals. I respected my teachers and they showed me the same respect. My training at Gleason High School laid the foundation for my successful career in medicine.”

However, Jennifer attributes her overall success to her Creator, “Anytime a door seemed to close on the way to a goal, the Lord opened a window and someone and at times many ‘ones’ stepped in to help. It was those times I knew I was doing exactly what I was put here to do.”