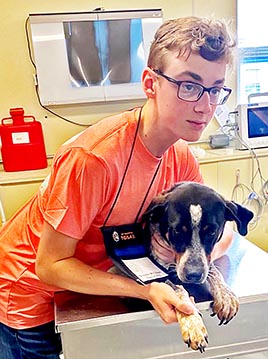 Brandon McCollum will begin his senior year at Westview with some hands-on experience behind him. As part of the Tennessee Governor’s School for the Agricultural Sciences held at the University of Tennessee at Martin, he learned valuable lessons like how to properly restrain a dog. His month-long summer studies have prompted him to consider a change in his fall work-based learning plans with the hopes of switching to time in a vet clinic.

Betsy Mantooth followed a week at Girls State with a month at the Governor’s School for Humanities at the University of Tennessee at Martin. The Westview senior was inspired by the social change incubator project whereby her small group came up with the winning concept of Planthood, a nonprofit advocating for more community gardens.

Mantooth, who is a member of the Weakley Playhouse countywide theater group, received three hours credit for the art history course she completed and a class on assessing American exceptionalism. In addition, she participated in a social change incubator, and, with her team, conceived of and pitched a nonprofit called Planthood to fellow school attendees. The proposed concept focused on advocating for more community gardens and won the vote of her peers.

She said in addition to attending classes for 4.5 hours each day, students also heard from guest lecturers including a Mark Twain impersonator and a forum with candidates for office. Her favorite was a lecture on conflict resolution.

“I hope that sticks with me in the future,” she said of the communication lessons learned.

To round out the days, students could go to the rec center for cycling, fitness, yoga, and the pool or do homework.

While class options did include the arts, Mantooth said the experience was “more about what it means to be a human.”

“My favorite part, what I’m going to remember the most so far,” she concluded, “was the night we watched the sunset, shared what we learned, and we danced. It was impactful, emotional, and amazing.” She added the experience was special in that the house band included one of her professors, Dr. David Coffey.

With both an aunt and father who had attended past Governor’s Schools, Mantooth was anticipating a positive and challenging experience.

For now, and the conclusion of the summer, all the active teen has on her docket is volleyball practice, applying for colleges, studying for the ACT, and “trying to hang out with my friends.”

Her current post-graduation plans are to study psychology at Tennessee Tech.

McCollum, who already was a part of the health sciences organization HOSA at Westview, the possibility of exploring veterinary options at Governor’s School was very appealing. Though not a member of FFA, he thought the four-week option at UTM on agricultural science would allow him to explore if caring for humans or animals would be in his future.

The Westview senior recounts the classes in small and large animal care, learning how to administer injections and test for pregnancy along with field trips across the state as “some of the best experiences I’ve ever had.”

Though still not ready to commit to a specific audience, he does admit to a “really big interest” in small animal science.

To earn the three hours of credit allotted through Governor’s School, McCollum attended classes for three hours each day including an introductory course in economics class covering how the market changes and adapts and a specific look at current examples such as supply and demand issues and how those affect farmers with products and prices.

He also got “hands-on” experiences.

“We gave shots, took weight and body temperature, anything they asked us for,” he reported. “We even palpated a cow to check for pregnancy.”

As part of a group project, he was assigned to a small group that had to recap the Vet Science program with each participant giving a minute presentation. His assigned day was on neutering dogs, initially a concern given that he was not sure how he would react to observing a surgery.

“I wasn’t sure if I could handle it,” he said of watching closely when the animal was only two feet away. He happily reported that he successfully observed and presented to the full school.

Field trips were local and across the state. They visited Tosh and Yeargin Farms. UT Knoxville’s Vet Science program, UT research centers, the State Capital, and Wildwood Farms in Memphis.

Outside of the formal learning experiences, participants enjoyed recreational offerings at UTM, including 8 ball, spike ball, basketball, and golfing on the simulator. The biggest appeal of the off hours, however, was fulfilling what he had been told about the Governor’s School.

“I had heard about it from friends who had done it. I was nervous because it was a whole month of the summer. Besides the work experience, though I made some of the best friends. What I had heard, was true,” he said.

He praised the building of a “social bond” with other students from across the state as well as the connections made with professors Dr. Jason Roberts, Dr. Joey Mehlhorn, and Dr. Philip Smartt.

“They were amazing,” he said. “They treated us like their own.”

Prior to going, he said the thing he associated most with ag was food. Now, after an intense month, he says he still relates ag to food but sees the bigger picture and how ag impacts the local economy.

What role he will play in that economy is still in question. The summer has already got him seeking a change in his planned work-based learning at Westview in the coming year with the hope of it now securing a vet clinic assignment.

He then plans to attend UTM and is “pretty positive I’m going down the vet route.”