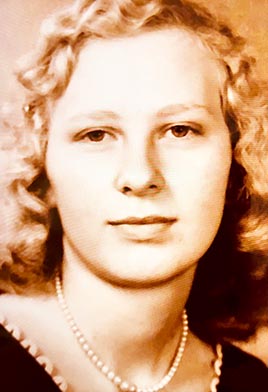 Shirley Aline Byrd was born at home out in the country, south of Gleason, on July 1, 1937, the third child of Chester Arthur “Check” Byrd and Mary Gwendolyn “Polly” Adams Byrd. They weren’t sure whether it was Carroll or Weakley County, so they just picked Weakley and never regretted it. She joined older sisters, Clareda and Louetta, with sister Rachel completing their family several years later.

The Byrd family moved multiple times in and around the Gleason area, living in 13 different houses during their time there. During Shirley’s younger years, her family lived close to New Valley Methodist Church, where they attended church.

“My mother always had beautiful flowers and a big garden, but she did not like farm life. She hated that cotton patch.” Shirley’s father had been farming since he was just a boy. When her grandfather Will Byrd died from malaria at only 39 years old, his young sons Check (15) and Carl “Fatty” Byrd (14) had to take over the farmwork.

When she was three or four, her family lived with the Wheat family, who had an apartment separate from their living space. This was close to Dead Man’s Curve between McKenzie and Gleason. During this time, her father worked as the “Safety” at the Milan Arsenal. “Daddy was the person who made sure the plant was safe, primarily from fire and explosions from people smoking around the live munitions. No one was allowed to smoke in certain areas, but there are always those who will take the risk of blowing themselves and others to Kingdom Come to grab a nicotine fix. His job was to ensure that did not happen.”

When Shirley was five years old, her family lived for a six-week stint in the Gleason Hotel. She remembers a circus came to town during that period. She could see the circus being set up and the excitement around town grew. The owner had been working closely with the mayor, Mr. Sammie Carlton, to follow all city ordinances for the setup of the circus. The circus man asked the mayor if he knew of a little girl with an outgoing personality who would be good at interacting with the people in the community. Mayor Carlton, who lived in a big white house with a wraparound porch right across the railroad tracks from the hotel, said he knew just the little girl and came over to ask her father’s permission.

“That evening I went to the circus and played the ‘Fishing Game.’ I won the most wonderful, beautifully-decorated elephant ever. I was so proud of my elephant that I went all around the grounds showing it to all my friends and anyone who would listen. I took good care of that elephant for years and would marvel at my good fortune in winning the very best prize at the circus. I mentioned the elephant years later to Daddy, telling him that I still had it, and I felt such a sense of pride every time I saw it. Daddy died laughing and told me that it was all prearranged that I would win so I could show off my prize to other Gleasonians, and entice them to play the game.”

Mr. Carl Allmon would visit with Shirley when she was playing out in the yard of the hotel, and he was hanging out with the gentlemen at Mr. Hosea Winsett’s barber shop just below the hotel. He would tease with her and banter back and forth. Mrs. Elsie Summers Winsett, the barber’s wife, was her Sunday school teacher out at New Valley, and Ms. Tommie McMahan was her Sunday School teacher in town at First Methodist. “Those two ladies were important people in my life.”

“One of my most vivid memories of this time in the hotel was when my Aunt Mary died in childbirth. The visitation was at our apartment in the hotel. Aunt Mary’s casket was open and Mr. Fitz Maddox, owner of the funeral home, came in and had a little baby, all swaddled and tiny. I was aghast that he laid that baby in the casket next to my Aunt Mary. No one had told me that there was a baby. I will never forget the pain and sorrow that I felt.”

When the apartment of Joe and Jozelle Hamilton came available, the Byrd family moved there, seeking more privacy for themselves and their girls. “I don’t ever even remember seeing the Hamiltons while they lived there. It was a perfect place right across from the school. Our neighbors were Claude Elvin Williams and Bobby, Dickie, and Helen Brawner. I loved living there.”

When Joe and Jozelle bought a new house over by the Bullocks, the Byrds made the move with them. Shirley celebrated her 6th birthday party at their new home. They had a whole new set of neighbors, one of whom was her friend Tommy Bullock. Tommy asked Shirley to go to the movies with him, which at age six, was her very first “date.” She muses, “Tommy was all dressed up in his jacket and hat. We got up to the ticket window and Tommy reached up to pay for the tickets. I asked him if he needed me to hold him up which embarrassed him and caused a good bit of laughter and teasing. We sat in the first row. I held his hat on my lap all the way through the movie, afraid to move for fear I might drop it. Tommy and I remained good friends always.”

Shirley’s first-grade teacher was Mrs. Virginia Edmonston Smyth. She will never forget her first day at school, Mrs. Virginia said, “Oh, you are Check and Polly’s spoiled brat.” Shirley particularly remembers her third-grade teacher at Gleason, Ms. Lottie Garrett (Haskins). “I will never forget the honor of sitting in Ms. Lottie’s rocking chair. It was such an honor to sit in her lap on that throne.”

Another class she enjoyed was music, with Miss Reba Oliver as her music teacher. One day when they were in music class, Kaye Trevathan (Mansfield) and Shirley started to laugh uncontrollably. Miss Reba sent them to stand in the hall and they were still laughing so hard that they could hardly talk. Their teacher came down the hall and asked what the problem was. They told her that the girl standing in front of them in music class had dandruff and that the dandruff was jumping. They had never seen such a thing and thought it was so funny. The teacher made them promise not to repeat this to a soul. Of course, she told her mother that night. The next day, the Weakley County Health Nurse was at the school and closed the school for a week as it was determined that there was an outbreak of head lice at Gleason School.

In Shirley’s memory, everyone in Gleason had a nickname, some complementary, some not, and others fairly neutral. Parents had nicknames. Kids on the bus had nicknames. As an adult thinking back, she couldn’t believe that they called her bus driver “Grease Monkey,” but that’s all she knew. He was a mechanic and would leave work to run the bus route. Every morning she would say, “Good morning, Grease Monkey.”

Shirley was eight when they lived next door to the Willie D. and Birdie Trevathan Johnson family. Her father was partners with Willie in a construction business. Shirley loved living next to his girls Rogerlene, Nelcene, and Jennifer. Nelcene’s nickname was “Herky,” and Jennifer’s was “Nippy.” They all walked to school together every day.

“On Saturdays, Jennifer and I would go to the movies, and then we would go home and play cowboys and act out the movie.” The “Bijou” Theater they so loved was just down the way from where Byrd’s Café later was. Mr. Shankle and his wife Marie liked the girls and made a deal with them that if they paid one time for the movie of the week, they could come as many times as they wanted. Shirley would ask to come up to the film room to rewind the film in preparation for the next showing, and Mr. Shankle would usually let her. She loved doing this. It made her feel so important.

When Shirley was about 13, her parents were running Byrd’s Café, located under the Gleason Hotel. Mr. Pete Taylor would come eat every day. When her mother would ask him what he wanted, he would say, “Just fix me a plate of whatever you’ve got. If you put it on my plate, I know it will be good. Tomorrow my stomach won’t know what I ate today.” Her mother said he would clean his plate every day and would always tell her how good it was. She once told Shirley, “Pete Taylor is the least particular man about his food that I’ve ever known.”

Shirley did not think Mr. Pete ever even knew who she was, but learned differently when she was grown and living in Memphis. When she visited her parents who had retired back home to Gleason, Mr. Pete came to their house and asked to see that pretty little blonde girl of theirs. He had heard she was at home and came to see her, adding another wonderful memory to her Gleason collection.

Shirley’s father was called to the ministry during her seventh-grade year, and they embarked on the itinerant life of a Methodist minister’s family. The first move was to Lexington at the end of her seventh-grade year. This was followed by a move to Michie, Tennessee, where she met Bob Michie whom she was later to marry. In her senior year the family moved again, this time just up the road to Counce, in that same area close to Pickwick Dam. Shirley graduated there in 1955 from South Side School.

That next year on March 17, 1956, Shirley and Bobby Dean Michie married. The newlyweds lived in Memphis, where Shirley worked at Sears and Bob worked as an accountant at Archer Woodbury, later Archer Malmo Advertising. As Shirley turned her focus to raising their family, she remained close with her Gleason friends. When they were all living in Memphis, Ross and Kaye Trevathan Mansfield’s daughter Stephanie would come to Shirley’s house after school until her mom got home from work. Other schoolmates who became lifelong friends and whom she will never forget include Nelcene Johnson Dunning, Tommy Bullock, Walter Anderson, and Clyde and Mary Alice Belew.

After Bob retired, the couple bought a motor home and traveled all over the U.S. and Canada. A highlight is her drive across the “Top of the World Highway” that our troops built connecting Alaska and Canada during WWII. “The project was thought to be impossible on that permafrost surface, but our soldiers did it in record time.”

Their travels over, Bob and Shirley returned to their Memphis home where they continue to reside. They feel fortunate their four children have built their lives in Memphis: Patricia works at Archer Malmo; Michael is with Tri-State Scales Company (he won the St. Jude Dream House a couple of years ago!); Margaret and husband Mark Davey own Davey Studios Murals; and Susan is an interior designer at Methodist.