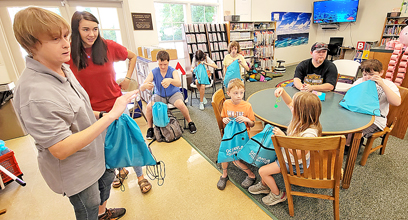 Cutline: Weakley County Ned McWherter Public Library Children’s Librarian Sara Rachels handed out goodie bags to those who were in attendance to the end of the Summer Reading Program party held Friday, July 1, at the library in Dresden.

DRESDEN (July 2) – The Ned Ray McWherter Weakley County Library in Dresden held a party to celebrate the end of this year’s Summer Reading Program. A pizza party, bounce house, and door prizes were available for participants of the program. This year’s program was “Oceans of Possibilities,” which offered different ocean-themed events throughout June with special guests appearing at the library. Smokey Bear, West Tennessee PBS, Josh Pirtle, Mr. Bond and Loral Winn, were some of the many guests who participated in the Dresden library’s program.

Children’s Librarian Sara Rachels noted, “We had close to 100 people sign up and had 71 adults. The main thing is, for the past two or three years this hasn’t been an in-person event and this is the year to see how things went. I keep calling this the comeback year. We’ve had really good participation this year from the Elementary School and Middle School, they have actually sent some of their Summer Scholars over here and that really helped with program attendance.”