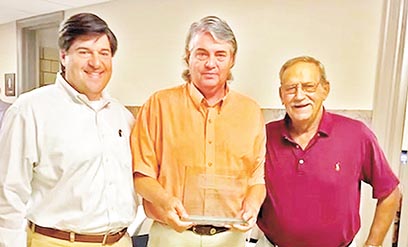 Weakley County Assessor of Property, David Tuck, who has held the office for the past 26 years, was presented with the Lifetime Achievement Award from the Tennessee Association of Assessing Officers, during his recent retirement celebration. This is the highest honor an individual can receive in the mass appraisal field. The award was presented on behalf of the Tennessee Association of Assessing Officers by the Executive Director, Will Denami.

“The Tennessee Association of Assessing Officers recognizes with deep appreciation the accomplishments of David Tuck whose career of service to Weakley County in the profession of property assessment within the state of Tennessee is marked with distinction, honor and excellence,” said TNAAO Executive Director Will Denami.

Denami further said, “David has been a friend and advisor to myself and so many other people across this state throughout the years. David developed a wealth of knowledge and experience from his long career including the nine years he worked for the Division of Property Assessments before he was first elected as Assessor in 1996. As Assessor, David has been instrumental in guiding the TNAAO, including when he served as President in 2001-2002. David’s contributions have been recognized many times over the years with awards including West TN Assessor of the Year in 2011, the Leadership Award in 2013, Outstanding Executive Board Member in 2017, and now with the Lifetime Achievement Award in 2022.”

“Well, I have never been about receiving awards, but, I have been about trying to help people. I have always felt like it was an honor to be the assessor, and have a responsibility to treat people fairly and really try to help as many people as you can. I have been fortunate to have a truly amazing team, which really is what makes the office work. You have to have good people on your team and treat them well and make sure we are always taking care of the people of Weakley County. I feel fortunate to serve as Assessor and will always be thankful to the people of Weakley County for giving me this opportunity and trust,” Tuck said.

In a recent letter to the Weakley County Commission, Tuck said he wanted to spend more time with his family, especially his grandchildren, and pursue other interests.

Tuck ran for the seat unopposed many times in the nearly three decades he served as property assessor.

Due to Tuck retiring his position, effective June 30, the Weakley County Commission appointed Lisa Odle as tax assessor to fill Tuck’s unexpired term. Odle, who has served as deputy clerk for the tax assessor’s office for the past 30 years, said of Tuck, “He’s done an outstanding job and we’re all going to miss him.”

“We’re looking forward to moving the office ahead,” Odle said. “We’re going into reappraisal next year. It’s going to be a challenge, but one that, I think, our office is ready to take on. We’ve got really good people in here, and we’re going to do the very best that we can for the county.”

The tax assessor’s duties include:

Weakley County General Sessions Judge Tommy Moore said of Tuck, “We’ll miss David. He has been here a long time. He has done a great job and modernized the office. He has been to work every day, and been to all of the trainings and conferences, and has done his diligence in trying to keep abreast of what’s going on. David has always been a professional at the job. He’s just a good guy, and we’ll miss him.”

Judge Moore stated that one of the things Tuck and Keith Jones, Director of Weakley County Juvenile Services, do every year around Christmastime is host a pancake breakfast for the courthouse crew and other county employees, as well as others that happen by. “If Keith doesn’t keep doing that, along with the new tax assessor, we’re really going to miss pancakes,” Judge Moore said.

The Tennessee Association of Assessing Officers (TNAAO) is a professional organization composed of the elected officials serving as Assessors of Property in Tennessee. The TNAAO’s stated purpose is to work on behalf of the people of the state to ensure fairness and uniformity in statutes regarding the assessment of property, as well as, to promote excellence through best practices and professionalism amongst those charged with this vital task.