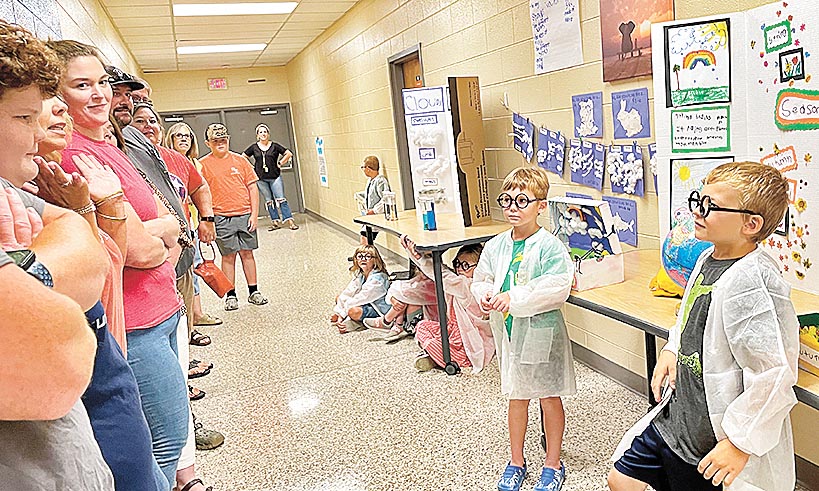 Gleason Summer Scholars enjoyed “Taking Summer by Storm” and reported on their weeks together at a special exhibition day open to the community. Along the way they heard from forecasters, tried to sink a boat, took an alphabet nature walk, hunted for hidden rocks, analyzed poetry about clouds and learned the names of clouds, visited a teacher-created planetarium and libraries, experienced their own earthquakes, measured them, and built structures to withstand such disasters. 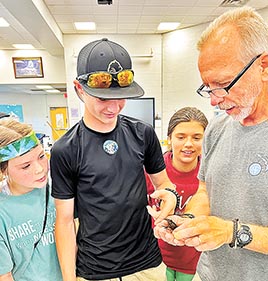 UT Martin’s Dr. Tom Blanchard visited Dresden Middle Summer Scholars and introduced the students to the animals and equipment used for research at Reelfoot Lake. He is seen here with (L to R) Bristol Walton, Gage Walton, and Trysta Northrup. Density experiments, simulated oil spills, interacting with a meteorologist, field trips, and lots of math fun were among the activities that helped show growth in post-tests. 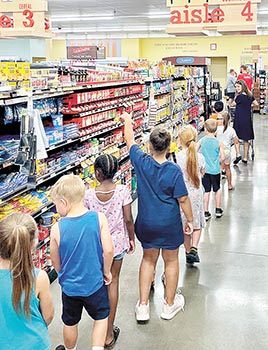 Martin Primary Summer Scholars learned about community helpers, visited the city library, heard from guest speakers, and read about goods and services before taking a field trip to EW James and Sons. 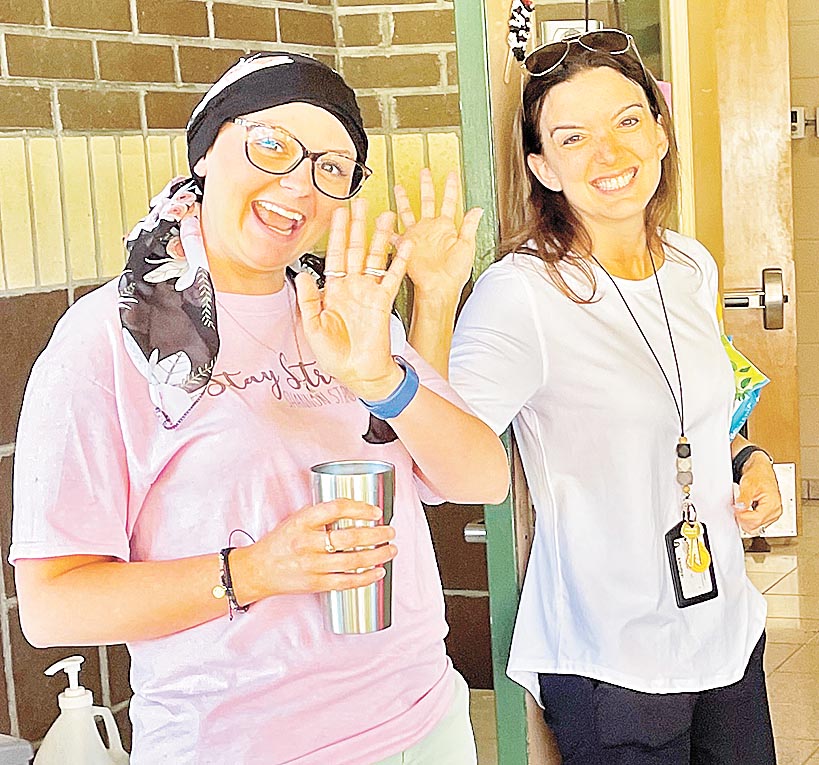 Teacher Shannon McMillin was the beneficiary of the Martin Elementary enterprises that offered sweet treats to the community. McMillin was able to attend a portion of the day’s events (seen here standing with Martin Primary teacher Becky Jackson) and plans to be back in the classroom this fall.

The Martin Elementary School Food Truck Festival may not have included actual food trucks, but the students did gain valuable insights from food truck owners including Sweet Jordan’s and Blue Swing Shaved Ice.

Gleason Summer Scholars enjoyed “Taking Summer by Storm” and reported on their weeks together at a special exhibition day open to the community. Along the way they heard from forecasters, tried to sink a boat, took an alphabet nature walk, hunted for hidden rocks, analyzed poetry about clouds and learned the names of clouds, visited a teacher-created planetarium and libraries, experienced their own earthquakes, measured them, and built structures to withstand such disasters. 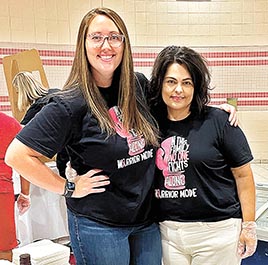 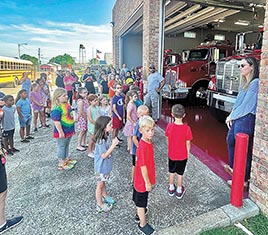 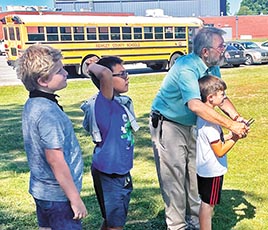 WEAKLEY COUNTY (June 24) – An ice cream and lemonade “food truck” festival made for a cool conclusion to four weeks of heated learning at Martin Elementary as the state-mandated and Weakley County Schools-customized-and-crafted Summer Scholars program ended.

Launched to address gaps in learning due to the pandemic, Summer Scholars became a way for Weakley County elementary and middle school teachers to address reading and math gaps while also integrating Science, Technology, Engineering, Reading, Art, and Math (STREAM) to bring a camp-like atmosphere to the May-June experience. Elementary schools chose either an earth science or economics unit from the shared curriculum as the basis of their work. Nearly 400 students participated in the Summer Scholars program.

In Sharon, students benefitted from a partnership with the University of Tennessee at Martin. After learning about the weather and even producing regular video weather reports, earthquakes shook Sharon Summer Scholars’ learning environment. Students dug deeper into how the earth works as Dr. Stan Dunagan, Professor of Geology in UTM’s Department of Agriculture, Geosciences, and Natural Resources, traded his usual classroom of college students for Sharon Summer Scholars. Continuing their collaborative learning the older students helped the younger as they built houses out of peanut butter and Starbursts, then mixed up various degrees of “earth” with cornstarch and water, before placing all on a large tin of rolling candy to simulate a 30-second quake.

Martin Elementary School opted for economics. MES counselor Amy Tuck and art teacher Amber Wharton spent three weeks of planning in the spring – often after hours – preparing for the STREAM experience that had MES students visiting a dairy farm, making ice cream in two different ways, “engineering” the best tin can ice cream maker they could, designing logos and promotional flyers, vying for various jobs in their ice cream business, and then selling to the public with the goal of raising funds for a beloved teacher’s battle with cancer.

MES Assistant Principal Tiffany Frazier served as the Summer Scholars Director and praised the teachers for their accomplishments.

“They are amazing,” she reported. “I do not know how they did it. Coming up with the idea, helping the students with their ideas – making those come to life – and not doing it for them but showing them how they can do it on their own – it’s been absolutely amazing and impressive.”

As to the impact, she explained, “We can definitely tell in their math classes, as the skills are getting more difficult, that they’ve retained that information from the beginning and are using it to solve the issues they are working through now, and they are really enjoying it more. They are excited to come to school every day, and to do the reading classes, so it’s been amazing benefits all around.”

Frazier said the students attended classes – reading, math, RTI – throughout the day and then the STREAM classes brought the learning together. During STREAM, teams were formed, and each had a finance manager tasked with finding out if the business had the money to buy all the supplies for what they wanted to serve, a marketing manager who worked on how they would present their products to the customers, and a CEO who was in charge of making the final decisions after hearing from the team members.

Tuck explained that students had to apply for the jobs and secure them through an interview process, thus developing soft skills they would later use on festival day as they interacted with customers.

Jessica Fortner’s fourth and fifth graders added a thirst-quenching touch as they brought the pages of the book they were reading to life. Fortner explained each chapter of The Lemonade War started with a vocabulary word, the phonetic pronunciation, and the definition. All vocabulary words were related to starting and running a business. The students used those vocabulary words, information from the book, research, and prior background knowledge to create their frozen lemonade stand business. The groups then created a business plan which included their business name, the name of their drink, ingredients, and advertisement.

On a break from sales and interviewed while enjoying a push-up pop, Tinsley Leyhue, 11, gave the entire experience a positive review, “I think it was fun and helpful and caring. I learned how to sell lemonade and how to work. I’ve never worked for a business before. I think it is fun,” she said.

William Cates, 11, who handled the sales, said he discovered the importance of math. Both showed the team spirit that was developed as they praised Darian Rooks, 11, for coming up with their business name Sweet Lemons which allowed them to entice customers to enjoy some “easy peezy, lemon squeezy” drinks.

Further learning for students came as they earned “Moo Money” for good behavior and were able to spend it on treats provided by area businesses.  While the moo money was pretend, the costs were covered by sponsors such as a sundae shop set up by Weakley County Farm Bureau Women, cookies from Sweet Jordan’s in Paris, and Blue Swing Shaved Ice sponsored by Taylor Automotive in Martin.

Tuck and Gentry also expressed thanks to Trout Dairy Farm in Cottage Grove for welcoming the school field trip.

The June 23 festival raised nearly $1,300 as community members came to enjoy the treats. Proceeds are going to teacher Shannon McMillin who is battling breast cancer and will use the funds to meet her deductible. Only a week away from her last chemo treatment, she was able to attend a portion of the day’s activities.

“We are super proud of them,” Tuck declared of the MES students, noting particularly their understanding of sequencing, increased confidence, and improved presentation skills.

Wharton repeated a conversation with one of the “business owners” who, in the first hour, had transferred the hands-on learning to his everyday life. “I’m really hot,” he had told her. “I wonder if it’s like that in the back of the kitchen. That’s probably why they are always hot. That’s probably why our cafeteria is always cold.”

Wharton was able to assure him that, yes, hard work can warm up a worker rather easily.

Justin Crice, Weakley County Economic Development Director, stopped by to see his future business owners in action. “Students engaged in activities to interview for school-based enterprise positions, engaging customers and raising money for a good cause is exactly what employers are looking for,” he noted.