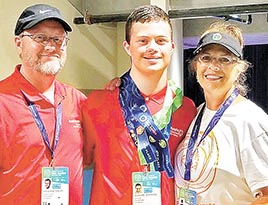 MARTIN (June 28) – Dr. Clinton Smith, associate professor of special education at the University of Tennessee at Martin and area director for Upper West Tennessee – Area 7 Special Olympics, accompanied eight Tennessee athletes to the Special Olympics USA Games, June 5-12, in Orlando. This year’s event was one of the largest events in history; more than 5,500 Special Olympics athletes and coaches participated, and more than 125,000 spectators attended.

For Smith, watching the athletes enjoy the games along with seeing them have their needs met were the most memorable parts of the trip. Most of his team members were experiencing the event for the first time, so competing with others on a national scale was a completely new experience.

“The way it works is we can’t be on the field. We have to drop them off and then go pick them up after they complete their event,” Smith said. “When I go pick them up, (I) get this big bear hug. They say, ‘Coach, I did it.’”

Not only were the athletes able to compete with others and make friends, but they also received health screenings and specialized equipment through the Special Olympics Healthy Athletes program.

“There was a girl there from Tennessee that received two brand new hearing aids, and as they were going back to the resort area, she said, ‘I can hear the bugs,’” Smith said. “Everybody got a free pair of shoes. If they needed glasses, they got glasses.”

By providing his athletes with guidance and support, Smith hopes he can show them that they are capable of succeeding through hard work and practice.

“When people hear, ‘Oh, he’s got a disability, he can’t do this,’ I’m like, ‘Well, wait a minute now. Let’s look at their strengths and not their challenges,’ and you build on their strengths,” Smith said.