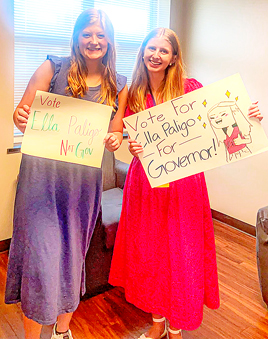 Keely Mathis of Dresden (Left) was campaign manager for Ella Paligo of Hendersonville. Though she was not elected governor, she was chosen by the panel of judges to represent the state at Girls National. 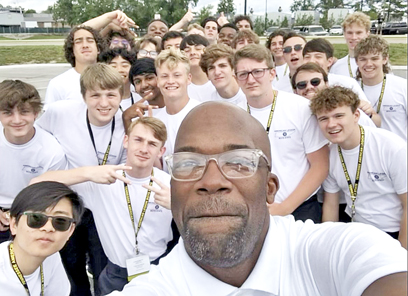 Experienced volunteer staff and counselors — each one a program alum — help guide participants, or “citizens,” through the week at Boys State as they elect city, county, and state officials, engage in party politics, debate legislation, and collaborate in a host of fun team activities. Layne Fowler, in glasses behind his counselor, said he was grateful for the opportunity to hear from state representatives and the TBI.

John Braxton Featherston (Front, Second from Left) is seen with his Boys State city. One of his takeaways from the experience at Tennessee Tech is Cookeville is that “Elected government is the best you can ask for.” 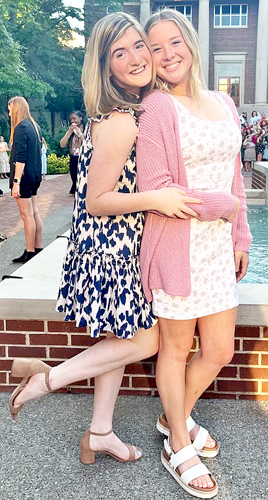 Tate Bell noticed the depth of friendships her brother formed at Boys State that netted him a college roommate. She hoped for a similar experience and, seen here on left with Kendall Rifner from Cookeville, said the connections made at Girls State at David Lipscomb University were strong.

WEAKLEY COUNTY (June 27) – “Life-changing” gets tossed around as a descriptor for numerous student-focused programs. While organizers may wish it to be so, fulfilling that promise is not always realized. However, a few conversations with recent participants in Tennessee Boys and Girls State suggests that either due to lessons learned or friendships formed, the American Legion-sponsored weeks on government continue to live up to the commitment.

Seven boys from Weakley County Schools traveled to Tennessee Tech in Cookeville for the May 22-27 event. Eight girls then made their way from Weakley to Lipscomb University in Nashville for their May 29 – June 4 version of activities. Both weeks included caucuses, conventions, and campaigns with some fun and games thrown in.

For the boys, marching was also a big component.

“We did a lot of marching,” said John Braxton Featherston of Greenfield. As a result of the peek into the legislature and the military, he came home considering the military “because of what they’ve done for our lives.”

He also got a taste of the ups and downs of being a part of the government. Running unopposed and winning the position of Tax Assessor, he joked, “No one likes me.”

Layne Fowler from Gleason said he enjoyed the marching and, since he was used to waking up early, had no problem with the early mornings. Since his current plans are to go into law enforcement, he mentioned presentations from state representatives and Tennessee Bureau of Investigation as noteworthy.

Breakfast was served before 7 a.m., and “Taps” sounded around 10 or 10:15 p.m. The hours between were filled with running for city, county, and state government roles, hearing from members of the judicial branch and the Tennessee legislature, and boys making some laws of their own.

The Girls State program drew Keely Mathis from Dresden; Kiley Corbin, Julia Lewis, Annie Henry, Sydney Stewart, and Sophie Wilson from Gleason; and Tate Bell and Betsy Mantooth from Westview. Just as Boys State is sponsored and supported by the American Legion, the girls’ program is covered by the women in the American Legion Auxiliary who select the more than 400 girls who attend the program annually.

Bell and Mathis were both somewhat aware of what they were getting into. Bell’s brother did boys state when he was a junior in high school and found his current college roommate at UTM among the hundreds with whom he shared the experience.

“It was a dream of mine to do Girls State,” said Bell. “I was really excited to make new friends from different parts of Tennessee.”

Meeting new friends is made possible as the large group is divided into cities and then students run for various roles. Bell ran for her City Council and to be on the Board of Education. She got the education role.

“I learned it was very hard and stressful. And mainly, it was about what benefits the kids rather than what would benefit you,” she said of the Board role that put her in a position to better understand challenges facing her mother Tracey Bell, principal at Martin Primary.

Mathis almost had a family connection to Girls State. Her older sister was not able to attend during COVID. Though she admits to not knowing exactly what she was getting herself into, she also knew, “Everyone said it was a great time and you meet all these people,” she recounted. “I know I like to do leadership camps and get out of the county and meet new people, and I knew Girls State would be the perfect opportunity for that.”

A major takeaway for Mathis involved the timing of the event. Converging on Nashville on Memorial Day, the participants were asked to bring items that would be donated to the Veterans Hospital.

“We talked about how most people use Memorial Day to go to that the lake. But the reverence that the holiday has was a huge thing I’ll take from Girls State,” she said.

Mathis’ other memorable experience was serving as the campaign manager for her roommate’s attempt to become governor. Though they did not win, Ella Paligo of Hendersonville was invited by a panel of judges as one of two participants from Tennessee to serve as “senators” at Girls Nation in Washington, D.C.

The Dresden native also served as an election commissioner and says she is looking forward to helping out with local elections.

As for anyone tapped to complete the summer experience next year, the recent attendees have some advice and encouragement.

“Educate yourself on real world issues,” said Mathis of the experience of being surrounded by hundreds of “strong-willed and strong-minded girls” adding, “I was surprised how open and honest people were on their own beliefs. They were respectful but open and honest. So, anyone going should find the topics, find your stance, and stick with it.”

Bell agrees Girls State “teaches you to think about your beliefs and listen to other people’s beliefs.” She also points out future participants should prepare for fun. “Prepare to find a new best friend. You meet people you may never see again, but you grow so close. The connections are so strong,” she concluded.

Ever practical, Fowler had this to say, “I would tell them to go and to expect waking up early and going to be bed late.”

“And to make friends,” said Featherston. “I’ve made friendships I hope to never lose.”