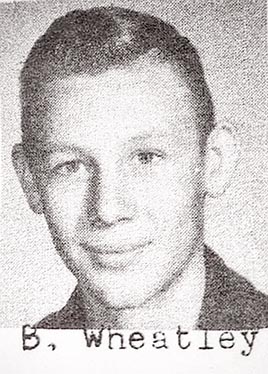 The Tennessee River/Kentucky Lake provided a mecca for hunting and fishing — for his older brothers. Bill was “not old enough to get out on the river, too young to carry a gun, let’s ‘just wait a few years’ so Baby Brother tagged along to carry the squirrels.” He was satisfied with his BB gun and his best friend, Charles Cowell, (who later taught school in Union City).

The boys crossed “just over the hill” to the two-room Lick Creek Schoolhouse. Grades 1-4 were in one room; grades 5-8 were in the other. Bill fondly remembers Mrs. Ona Jones, his 5th Grade teacher, as a special lady: “Everybody loved her and her abounding kindness.”

Young Bill mowed the yard, split wood, and carried the coal bucket on many treks

to the house, but not on Sunday. The family attended church at McCrae Chapel. Bill especially remembers those 3rd-Sunday-in-May Decoration Days with morning preaching, dinner on the grounds, and afternoon singing — a tradition for the Wheatley family.

The family finally got electricity when Bill was 10 years old. He now muses, “There we were, living by and daily seeing the lake that provided the power for TVA, yet we were the last place to be serviced.”

Bill’s father was called into the ministry, and “Daddy” became “Brother Wheatley.” Their missions of service took the Wheatleys from the farm into Big Sandy (four years), Gleason (three years), and then Puryear (two years), where Bill graduated from high school. Brother and Mrs. Wheatley continued devoting their lifetimes to His service.

Ye scribe’s (Nancy Hicks Williams) first five-year-old memories of “going to church” at El Bethel Church evolved around Brother and Mrs. Wheatley, his soft, kind voice, and her loving hugs. They were on the Methodist Circuit, serving four churches, (Liberty, New Valley, Seminary, and El Bethel), two per Sunday, twice monthly. Russell Dinning was El Bethel’s song leader, and as an eight-year-old I became pianist. Brother Wheatley heard me play “What a Friend” for the first time sixty-six years ago. I could not understand why they had to leave and, still, to this day, have never forgotten them.

Bill mowed yards during these summers, as well. Brother Wheatley built Bill a little wooden trailer to haul his four-blade, push-reel lawn mower to pull behind his bicycle. He set himself a regular schedule on Thursdays, Fridays, and Saturdays and always waited until the dew was “off” before starting.

Ellis Frank Trevathan’s and Claude Steele’s yards were two Bill remembers mowing: “The Trevathan’s yard was the biggest. I got $3.00 for that one.” Even though money was scarce, Bill occasionally wheeled up to the walk-up window of the newly-built Dairy Bar and ordered himself an ice cream cone.

Gleason’s love of sports inspired Bill. Though he was “too small” to play football, the round ball was a perfect fit. He played the guard position and set as an early goal to become a coach. He remembers it was unusual, in his opinion, for a coach to be a good teacher. The main job seemed to be to focus upon coaching, and the classroom was just a sideline job. “The best teacher I ever had from the 1st grade all the way through post-graduate school was “Butch” Dudley Sanders at GHS. He had a way of saying things one would remember.”

His best subject in high school was math and Mr. Vernon Dunn certainly helped fan those fires. Bill transitioned to Puryear, Tennessee, for his Junior and Senior high school years. Friends were easily made. “I wasn’t Valedictorian, or anything like that,” Bill adds, “but I was smart enough, when my brother, Baxter, was hired at Puryear to teach and coach girls’ basketball, to reschedule and stay out of his classes. I knew better.”

Bill had perfect attendance all the way through school, from 1st grade through high school graduation in 1958, with the exception of two days he missed to attend his grandfather’s funeral.

Lambuth College was next for Bill, where his athletic and academic skills were put to good use. He played basketball, baseball, and tennis (keeping in mind there were no tennis courts in 1950s Gleason or Puryear).

Bill started off as a math major: “There was only one professor in the entire department, Dr. Brown. He could speak in five and write in eight languages. There was, however, a problem — he couldn’t bring it down to our level. I was enrolled in a one-hour class which met five days a week. One day, Dr. Brown worked on an equation at the board and a classmate asked him how he calculated this specific step. Dr. Brown replied, ‘By a method you will learn later.’ I knew it was time to switch majors.” (Health/P.E., with a minor in Biology).

Bill Wheatley served the ranks from teacher, coach, assistant principal, and principal of elementary and junior high schools throughout Madison County, Tennessee, over a 34-year career. In addition, he has been with TSSAA, officiating and supervising, for a combined 64 years and is still going strong. Golfing is his pastime.

Reflections from this “son of a preacher man” include Bill’s belief “One should always set the best example — you don’t know who’s watching, in or out of the classroom, on or off the court. Never quit. Take and accept what life gives you, daily. You can’t change it. Learn from it.”

“I loved my family’s heritage at Big Sandy. It was all we knew. Most boys who graduated from there went to Detroit or Ohio and worked in the factories. Daddy entering the ministry was the best thing that ever happened to me and my brothers. It gave us opportunities.”

Former GHS faculty member “Papa Leland” Lemonds told Bill at his father’s funeral, “Brother Wheatley was a mighty good fellow and a fine daddy. He set some high standards for you boys to live by.”