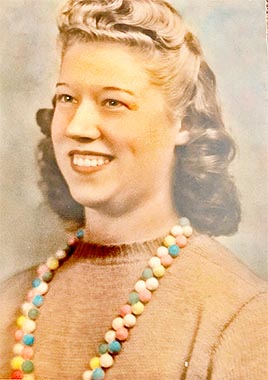 During this spring and summer the Gleason School Alumni Association will feature interviews of its Inaugural Class of Lifetime Charter Members. Comprised of GHS alumni from the 1940s and 1950s, we must bestow a special place of honor to our senior most living GHS graduate, Ms. Virginia Hodges Jeter, 97. The Class of 1944 graduate was gracious to share some of her fondest School Day Memories with her cousin Diana Bradberry, GHS Class of 1961 graduate and GSAA Chair.

Virginia was born in 1924, the second of 11 children of Roy and Aileen Bradberry Hodges, all of whom graduated from Gleason High School. Born at home in the country close to the Liberty Community, her birth was attended by “Old Dr. Jeter” (Joshua Edgar Jeter), whose son Jack, Virginia later married.

Virginia walked to Parks School in the Liberty Community with her older sister, Nell. Mr. Eunis Collins was the principal, and her teacher was Miss Deloma Brann (later Wiggs). Miss Brann, who was from Dresden, boarded with the Bullock family just down the road in the Sand Hill Community north of Gleason. Every morning, Virginia and Nell waited for the Trentham boys to walk with them. Elvin loved to walk behind her when she wore her galoshes and step on her heels until she stepped out of them and hit the muddy ground with her bare feet!  She did not like this “game” at all and tried to keep him in front of her at all times so she could avoid it.

Virginia recollected that the students regularly recited from a familiar book. As her schoolmate, Dudley Sanders, was called on to read one day, it started snowing quite hard. The children were captivated by the snow, all excited and whispering, but Dudley continued to “read.” As he was paying much more attention to the snowstorm than the book, the teacher stopped him and said, “Dudley, it would help if you turned the book right side up.” Everyone laughed because they knew that the older children all had the primer memorized.

The Hodges family moved into town and Virginia started third grade at Gleason School. Like many children at that time, she and her siblings walked to school. Her teachers included Mrs. Lottie (Smyth) Garrett, Mrs. Baird, whose husband was a preacher and later County Clerk, Miss Edna Castleman (Scyster), Miss Daisy Wiggs, and Miss Ruth Cochran (Portman).

Her family were members of Liberty Methodist Church, but often attended Sand Hill Baptist Church as it was closer. Virginia remembers with pleasure the “dinners on the ground” at Sand Hill every August. Her Bradberry, Moore, and Head elders were also part of those church communities.

After they moved to town, her brother, John Robert, stayed with their grandparents in the summers to help on the farm. As a little girl Virginia loved to be there too “helping out” as they shucked corn, cut it off the cob, boiled it, and soaked it in salt water to make hominy. Hog killings were a big deal. Her grandmother Bradberry would fry sausage and can it in grease for the winter. The girls took turns churning milk several times a week to yield buttermilk and butter.

Following her uncles, J. D., Harold, and Homer around the field when they were plowing and harrowing behind two mules, Kate and Nell, was a fond memory. The boys sang at the top of their lungs, delighting Virginia with her favorites, “Little Brown Church in The Wildwood” and “Old Dan Tucker.”

The family always had special holidays with her Bradberry grandparents. Her grandmother made boiled custard, putting it out in the rain barrel for the icy water to keep it cold. Mrs. Mattie (Martha Josephine Moore) Bradberry had taught “elocution” in a country school out from Fulton, Kentucky, before she married. Virginia never forgot the lessons she was taught at her knee as she corrected, on the fly, each of her grandchildren when they mispronounced a word or made a grammatical error.

Virginia’s most beloved gifts from childhood included a gold cross that her parents gave her one year for Christmas. When she was in seventh grade, Virginia won the spelling contest in her class. Her teacher, Mrs. Agnes Smith, awarded her a gold pin shaped like a music note for her prize, and boy was she proud!

When she was growing up, Virginia wanted to be a nurse for as long as she could remember.  Rubye Taylor had been “Young Dr. Jeter” (Robert M. Jeter’s) assistant until she relocated with her husband to Texas to complete his military service during WW II. Dr. Jeter asked Virginia to fill in and she happily agreed, later becoming his assistant full time.

After Virginia married Dr. Jeter’s younger brother Jack, the couple reared a lovely family of three children in Gleason. Her great-grandchildren are just the latest generation following in Virginia’s footsteps, attending Gleason School nearly a century after their great-grandmother.