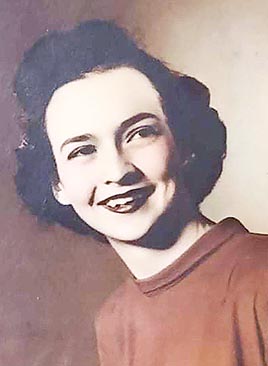 June Oliver Meador was born in the Ore Springs Community as the only child of Flossie Fern Collins (also a Gleason High School graduate) and William Calvin (“Pete”) Oliver. June grew up on the Oliver farm north of Gleason, off what is now Highway 190. The farm was originally settled in 1829 by June’s great grandfather, Isaac Oliver, and is the longest continuously owned and occupied family farm in Weakley County.

The Oliver family came to West Tennessee from Pine Level, North Carolina, via wagon train, and built a log cabin which was home to the family for many years. The second house sheltered the family for an even longer period before burning to the ground in the late 1890s. The third home, constructed of weatherboard, was completed in 1900 on the same spot as the previous house. June and her husband, Eli, built their home on the farm in 1953. The third homeplace was razed in 2014, and June and Eli’s daughter Melinda and husband, Milton McNally, built their current house on the original homesite in 2016.

June was born at home in 1926, and delivered by “Old Dr. Jeter.” He came in and spent the day with them on a Saturday. Reuben Thomas (“Rube”) Oliver, Mr. Oliver’s sister, named for her great grandfather, Reuben Edmonston, stayed with Mrs. Oliver during her labor and cooked dinner for Dr. Jeter and the family the night June was born. June did not see a doctor again until she went to college. The family used home remedies, primarily kerosene, to prevent infections from wounds, and June’s mother used a poultice for sore eyes, a potato to suck the poison out of a bee sting, etc.

June’s cousin, Mary Frances Oliver, was born in 1925. June and Mary Frances were “joined at the hip” from the time they could walk until Mary Frances died in 2010. They graduated from Gleason High School in the Class of 1944, and attended Murray State University together.

In 1931, Mary Frances went to “Primer,” a class for five-year-olds at Central School, which we would now call kindergarten. Central was founded in the Ore Springs Community in 1913 and was serviced by covered wagons, which were driven by men who contracted with Weakley County Schools. Lee Oliver and Ed Moore were two of the drivers June particularly remembers.  She also remembers being impressed that the drivers got up at 4:00 a.m. to start their routes. The Primer Class was abolished in 1932, just before June was to begin, causing her great disappointment, since she had to wait another year to start school. Her first teacher was Mrs. Novella (Moore) Radford.

At the time, Central School went through 10th grade. When June was about to begin 9th grade, the 9th and 10th grades were abolished in all rural schools. June therefore attended the next four years at Gleason High School – many of them during World War II.

During her years at Gleason, she first rode a “school truck,” which was a pickup truck furnished by school board member, Coy Black, and driven by Adrian Brann. The truck had a homemade wooden “camper” on the bed and wooden benches built all around the sides. The second year, she rode in a private car provided by the county. Each family paid a fee for their child to ride to school until the county bought busses in her sophomore year.

June recalls that, although the high school had a cafeteria, the students were free to spend the lunch hour wherever they chose. She and Mary Frances chose to go to a local mom and pop restaurant where they would each have a hot dog and split a Pepsi for a total cost of 30 cents.

The war had a profound effect on June’s high school years. Many of her classmates were drafted prior to their senior year of high school. By the time of her graduation, there were only five boys left in her class. Gas rationing curtailed dating. Boys with cars would often pool their gasoline so that at least one car had enough gas for several couples to go out together. Cemeteries were a prime spot for siphoning, and the girls served as lookouts in case law enforcement officers became curious about what was going on among the tombstones.

June remembers that, during her days at Gleason High School, it was in doubt whether she would be able to go to college because the price of sweet potatoes hit rock bottom at 10 cents/ bushel. World War II, however, created a tremendous demand for produce, and prices went sky high. In 1943, Mr. Oliver sold an entire wagonload of sweet potatoes for $3.50/bushel, a price unheard of at the time. That bonus gave her parents the money to fund her college education.

At Murray State University, she met her future husband, Elihu Meador, with whom she eventually had two children, Lem and Melinda. Both are also proud graduates of Gleason High School and Murray State. June and Eli were married for 63 years until his death in 2012.

From the time June can remember, she loved books. She remembers as a child feeling as though she was in wonderland while in a bookstore in Nashville with her cousin Reba Oliver.  She decided then and there that she wanted to be a librarian. Following college graduation in 1948, she accepted a job as librarian at a high school in Madisonville, Kentucky.

Eli and June married in 1949 and lived in Lexington, Kentucky, where Eli attended graduate school at the University of Kentucky. When he finished, they both taught for three years in Bullitt County, just south of Louisville, where June was a member of the Junior League. As much as they enjoyed their life in Kentucky, they decided in 1953 to move back to the family farm in Weakley County.

Eli first taught in the Veterans School Program for Weakley County, after which he became a manager for the Production Credit Association and later the Federal Land Bank. In the 1970s, he opened an appraisal office and went into a private real estate practice. Once her children were in school at Gleason, June began substitute teaching at her alma mater and happily filled in for English teachers until Melinda and Lem graduated from high school. She then served as Eli’s secretary until his retirement.

June, at age 95, continues to live on the family’s Century Farm close to her daughter, Melinda, an Assistant District Attorney in Obion County, and her son-in-law, a businessman. Her son, retired from AT&T, lives in the Atlanta area with his wife, Bonnie Barclay, who works in marketing. June has two grandsons, Jake Knanishu and Cale Oliver Meador, who are devoted to her.

She was delighted to be honored as the 2018 Tennessee Iris Festival’s “Golden Iris,” during which she was chauffeured in the Iris Festival Parade by her doting nephew, Ryan Meador, presented with a Century Farm sign by her distant cousin and lifelong friend Terry Oliver, and made an honorary citizen of Dresden.