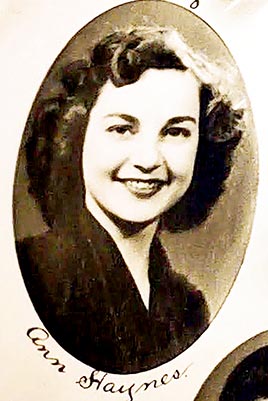 On September 14, 1931, at the Hoague place across the road from McCain’s Grocery Store, Samuel and Audrey Jackson Haynes birthed a baby girl, the youngest of six children (four girls and two boys). They named her Iris Ann.

Ann’s known family history (researched, written, and published by her cousin) dates to her great-grandfather, William Todd, and his family’s departure from North Carolina in oxen-drawn wagons. After fording rivers and conquering nearly-impassable trails, the family arrived in Stewart County in 1819. They traveled onward through Henry County and temporarily established themselves in Carroll County in 1821. The Todds finally settled in Weakley County in 1823. They had limited supplies but managed to build a rude log cabin while fiercely fighting the Chickasaw right on what became Bells Store Road.

Forty years later, Civil War soldiers from both sides marched through this northeastern corner of Weakley County, right across the Todd property. The troops were always looking for food. The Todds would hide their cattle deep in the woods until the soldiers left. Once, the Yankees camped there, and Ann’s great-grandmother, Elizabeth Todd, had to stay up all night cooking food for the Union officers. Ann now resides on this same property, but her story of return is yet to be told.

Ann’s father was a general carpenter. He had been gassed in Germany during WWI and suffered lifelong lung problems. Carpentry allowed him to manage his workloads and timeframes to better provide for his family.

Ann’s mother contracted “consumption” (tuberculosis or TB) and was bedridden for three years. Doctors advised taking her out West for a better climate. In June of 1940, Mr. Haynes sold their house and contents and bought a 1935 Black Studebaker. He crafted an enclosed “camper” on top of and attached to a 16’ trailer. It was complete with windows on both sides, a door, and a mattress on the floor in the middle. Then, he took the back seat out of the car and made a bed for his wife. The family headed Westward with three children in the camper and three in the car with their parents.

A five-day ride took them to Amarillo, Texas, where they were advised to drive two more days north to Prescott, Arizona, for a better climate. “We camped seven miles up Granite Basin Mountain by a beautiful lake. We fixed Mama’s bed out in the air, under the trees, with the cool breezes and a little tent-like canopy to protect her. That was Friday. She died before sunrise.”

“Daddy walked down to a more populated area to ask for a ride into Prescott to find a funeral home. Some women came up to our campsite to stay with us until he returned. An ambulance came for Mama and took her away. Her body was shipped by rail to McKenzie. Her wooden box was stationed at the depot deck as we rounded the corner. Mama beat us home. I was eight years old.”

Ann continues, “Mother was TB positive and contagious. The four of us girls were carriers, but were not contagious to others. We just had to fight for our own lives. First, June, age 16, was housed and died in a sanitarium outside of Oak Forest, Illinois, in 1945.

Violet had ribs removed in her back. She had to lay prone with heavy packings weighted down with stacked books to hold her lungs and other internal organs in place. The ’disease’ was literally cut out of her body. She had long bouts of rest treatment in a sanitarium. She survived, but the surgery left a huge, sunken hole in her back.”

“Sister Margaret, too, had the rest treatment and, in six months, was healed.” With a big smile, Ann adds, “She lived to be 101 years old, and is buried right up the road in Tumbling Creek Church Cemetery.”

With her brothers at war and sisters medically institutionalized, only 14-year-old Ann and her father were left in their Chicago home. “My family was scattered, grown, moved, gone.” In 1945 when WWII ended, Chicago celebrated with a big parade. “My brothers returned. One was deafened from a punctured eardrum which later resulted in his death from brain cancer at just 34 years old. The other gave me a new life – he brought me back home to Tennessee.”

Aunt Willie and Uncle Bertram Bell, who had never had children, took her in and gave her a loving home place with fresh air, open space, and a friendly community filled with sweet, understanding, and loving people. Ann’s normal teenage years had finally begun.

Ann first attended Tumbling Creek School as an 8th grader. Her best friends were Sarah Floyd (Foster), Mary Floyd (Vaughn), and Melba Denning (Berry). Miss Lucille Dunn was their teacher, but only briefly, because she left her teaching job to wed Mr. Oscar Deason, Weakley County’s Court Clerk. “I volunteered to braid Miss Lucille’s hair before the wedding and did it right there at school. I told her I thought it would look pretty. Mr. Worth McCain taught for the remainder of the school year.”

She always came home from school and helped with daily chores. “I worked in the summertime as well as in the fall for Check Pickler, either hoeing or picking cotton. Uncle Bertram always had sweet potato beds. I would pull slips, and help ‘set’ when the ground was ready.” Her work ethic was established.

Ann attended GHS 1946-1950: “Mr. Charles V. Butler was our principal. He was a nice, sweet man. His wife taught Spanish.” Ann was especially proud of an impromptu, in-class writing assignment, and pulled it out to show me. “Mrs. Estelle Bobbitt (9th Grade English) wrote five words on the chalkboard and gave the class one hour to write a story using them all. Mrs. Bobbitt’s son, Duane, was helping his mother read those early-in-the-year compositions and picked mine out. He told his mother ‘It was too good, too perfect. There was no way she (Ann) could have written that either within an hour or without help.’” Ann’s intelligence gained her the nod of the hardest, smartest teacher in the building on day one.

“In 1947, a law was passed requiring all children to stay in school until they were 16 years old. My ‘old’ Tumbling Creek classmates, Harold Dinning, Billy Joe Floyd, and Joe Williams, miraculously appeared at GHS one day. I was proud to see them.”

“I was a GHS cheerleader all four years. I can remember one special game when we were allowed to ride the player bus all the way to Jackson, Tennessee. Miss Francis Maddox and Mr. Wendell Reed chaperoned.” She remembers socializing at the soda shop, where Dudley Sanders and Donna Dellinger Haskins made floats.

Her high school years were filled with banquets, proms, pageants, and young suitors. She gently opens her scrapbooks and takes me down those late 1940s memory lanes. She had neatly placed and scripted every memento, napkin, note, program, brochure, name tag, and even chewing gum wrapper from any function she ever attended as well as photographs of the young men who escorted her (and there were plenty, all handsome, too). These scrapbooks are unbelievable treasure-troves–artistic, stylistic, exquisite, totally put together–just like Ann.

Ann was chosen as “Miss Gleason” in 1950. Bobbye Lu Smyth (Robison) was 1st Maid and Rubye Frances Trevathan (Snider) was 2nd Maid. Mr. & Mrs. Smyth provided the convertible and transported the royalty to the Humboldt Strawberry Festival Parade, where she participated in the afternoon luncheon and interview sessions for the territorial pageant.

Ann pays tribute to the ladies of Tumbling Creek — Mrs. Ruth Clark Lawrence, Mrs. Myrtle Owen Klutts, Aunt Willie Jackson Bell, Mrs. Gertrude Hall Morton, and Mrs. Opal Rumley McCain — who most influenced her beyond school, as if they were her extended family.

After high school, Ann had wanted to join the Army, but her brothers, who had both served in WWII, said absolutely not. She married Billy Gene Phelps in 1951, after which they moved to Flint, Michigan, where Teresa, Tony, and Billy were born into the Phelps household.

Ann always had her precautionary yearly x-rays. One response came back: “You have a spot on your lungs; you need to ‘take the cure,’” Ann solemnly shared. There was no penicillin or streptomycin yet. She was admitted into a sanitarium for a year and learned how to live, one week at a time: shots on Mondays and Thursdays, 24 pills each day, six at a time. Half of her left lung was surgically removed. She called her father to come help her husband care for their toddlers. Her daddy lived with his little Iris Ann and her family for the next 12 years, caring for her as he had once done for her mother.

Ann graduated from the Joan Claire Beauty School in Flint in 1960, where she owned and operated her own hair salon for nine years. After the family returned to Gleason in 1969, she kept the ladies of the town in style at Ann’s Beauty Shop for 51 years, retiring in 2020. Her secrets to a successful life are hard work and long hours.

Her husband Billy once told her, “If you spent half as much time with me as you do with those old women at the beauty shop, I would be in good shape.” Billy and Ann were married for 40 years before he passed away in 1991.

“I was gifted with life. God has blessed me.”