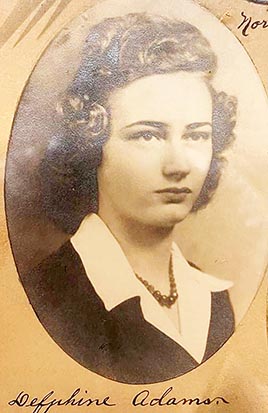 In 1927, Alice Delphine Adams Tapper was born at home in McKenzie, Tennessee, to Roy and Pauline Byrd Adams. Weighing only two pounds at two weeks of age, the doctor said she was too weak to survive. Grandmother Adams wouldn’t hear of it and nursed her to health. Alice not only survived but soon thrived.

Alice’s father, Roy, died when she was 14 months old, and she doesn’t remember him. Sometime later, Carlos Brinkley came to call to “meet the widow” and a courtship ensued. Three more children were born into the family: Marvin, Carlyne, and Joyce Brinkley. Alice never thought of them as stepfather or half-sisters. She loved them as her own, and they her.

At home, Alice’s duties were to do the dishes, draw water from the well, and tend to her little sister, Carlyne. Alice’s mother did not like butter, so they did not have a churn. Her mother made butter in a Mason jar by shaking it until the butter formed as she wanted only small amounts since they did not use it much.

Alice walked a half mile to Peace and Harmony School, a two-room schoolhouse in Weakley County where she spent the first eight years of her school life. She was always the youngest in her class, as she had started school early. Miss Mary Ruth Carroll (Bouldin) was her teacher and Mr. Harles T. Woodard was the principal. The school building burned down about a year after she graduated.

Alice started at Gleason High School in 9th grade, where Mr. J. H. Logan served as principal. His wife Mary Louise (Simpson) Butler was the librarian and taught language along with Mrs. Estelle (Holmes) Bobbitt, whose son, LeJoe, was in Alice’s class.  Her parents paid for her to ride into Gleason for a half year until the county started to provide bus transportation.

Alice remembers that Mr. Logan had to go serve in WWII because, although he was married, they had no children, and every male under the age of 35 years had to go if unmarried or had no children. She remembers those facts clearly because her uncle, Carl Byrd, was 33 or 34 years old in 1941 when she was 14. He returned home and became the father to Russell and Kenneth Byrd who went on to Gleason school in the next generation.

Josie Aylor (Riley) was a particularly good friend with whom Alice spent many happy hours, often spending the night at her home near Tumbling Creek north of Gleason. Alice vividly remembers the tragedy which befell the Aylor family when Josie’s older brother drowned. He swam out to save his fiancé, who was calling for help, and they both drowned. Alice’s friendship with Josie began when she started to Gleason School, in 11th grade. Alice introduced herself to Josie to tell her how sorry she was about her brother’s death. She has never forgotten the shock and sorrow she felt at hearing that news and then meeting the sister.

Another high school classmate and good friend, Virginia Hodges (Jeter), frequently told Alice about how much she was learning and how she loved working as Dr. R. M. Jeter’s assistant in the summer between her junior and senior years, and part time during her senior year. This prompted Alice to start thinking of a medical career. During her senior year, she saw a recruitment ad for the Cadet Nurse Corps, a free program which recruited young women to help with the war effort. The U. S. Health Department ran the program for 30 months during World War II. Alice answered the ad, mailing it to an address in New York City.

Shortly after mailing the letter, she received an application from Baptist Hospital in Memphis for a position in their next nursing class. Her parents agreed that this was a good opportunity for her, so she applied and was soon accepted into the program. When the time came, they sent her off on the train to Memphis with money to pay a taxi to get her to Baptist Hospital. She was embarking on her career and life path.

On her trips home from school, she used a combination of train and bus transportation. She rode the “Shorty Bus,” run by Shorty Dunlap out of Dyersburg, which served rural areas of West Tennessee. One trip Alice particularly remembers was when she had to change busses in Milan. She was hungry and went to get a hamburger and missed the bus. There was no way to contact her daddy, who would be waiting for her in McKenzie. Her luggage was on the bus, but she was not. She worried that he would not know what to think.

After her panic subsided, she made her plan. Knowing both the bus and train schedules, she walked over to the train station and caught the train which got her into McKenzie at 11:00 pm, several hours after she was expected. She stewed all the way, fearful that her daddy would not know what to do. She need not have worried. When she got off at the McKenzie Depot, her dad was waiting for her. He had collected her bag, talked to Shorty, and they decided what had likely happened. “Home Sweet Home.”

Alice, who had been known by her middle name “Delphine” for her whole life until then, decided (for reasons apparent) to start using her first name and thereafter was Alice Adams until she married. While working at her first paying job with the Veteran’s Administration Hospital (Kennedy) in Memphis during nursing school, Alice met a medical aide named Ed Tapper from Pope, Mississippi. They married and raised four children in Southaven, Mississippi, where, at 95 years of age, she continues to reside.