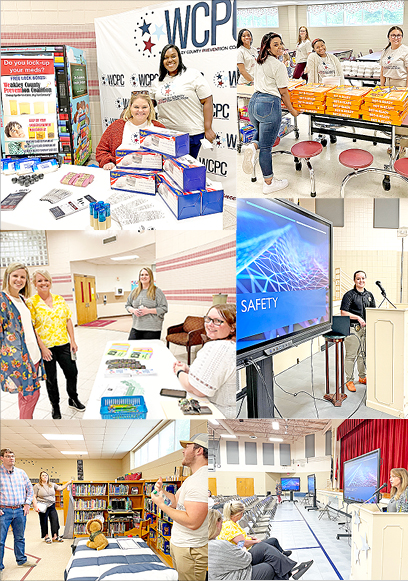 MARTIN (May 12) – In response to what Martin Elementary School Principal Patresa Rogers describes as one of the most concerning trends in her 31-year career, the school hosted a Cyber Safety for Kids and Parents awareness event on May 4. With the help of the Martin Police Department, Weakley County Prevention Coalition, Carey Counseling, and Weakley County Schools social workers and student support staff, parents were exposed to the myriad of ways young children are experiencing the darker side of technology and offered help on how to address several alarming issues.

“I want you to leave here tonight informed, a little more prepared than when you walked in and with some more resources that are available to you as parents – outside the school system, inside the school system – so that you have some more people to turn to,” Rogers told the group of parents, teachers, and community leaders in attendance in the school’s gym. “Because it takes a village. I’ve always believed it, and I still believe it. We want to partner with you to help you. During the day, they’re our kids too.”

Children expressing anger, aggression, anxiety, and “feelings of not being up to par” as the other people they are reading about on social media were among the issues Rogers and MES faculty have observed this year.

“There is no way they can sit in a classroom and learn,” she said of the emotional and mental pressures many are experiencing. She underscored that the students experiencing such emotions were younger than ever before in her tenure.

Partnering with the school in what Weakley County Schools Safety Coordinator Lorna Benson will serve as a pilot for other schools in the district were members of the Weakley County Prevention Coalition which offered parents a hands-on experience of trying to determine what drugs, vaping devices and other items of concern could be Hidden in Plain Sight. The exhibit was a child’s bedroom set up in the school library and overseen by WCPC Youth Engagement Coordinator Cannon Brawley. The WCPC also provided supper for the evening’s activities.

Martin Police Department Investigator Sarah Turner, now in her 8th year with the MPD, covered an array of cyber security issues. A graduate of the National Forensic Academy and a Certified Forensic Cell Phone Examiner with a master’s degree in criminal justice, she serves as an area representative on the Internet Crimes Against Children (ICAC) Task Force which includes 50 affiliates across the state. She pointed out Martin has the only ICAC affiliate in Northwest Tennessee, and West Tennessee has only 9 of the state’s 50.

“However, West Tennessee has the same issues as middle and east Tennessee,” she noted of the disparity.

One case she handled, she said, involved an individual with more than 30,000 images of child pornography. She has seen a child as young as 5 years old with an addiction to watching sex.

With offenders often obtaining their photos and connections through social media apps and children becoming more involved with social media and chat rooms, Turner points to the cell phone as a source of concern.

“Many children that I have encountered are not mature enough to have a cell phone,” she said. “I can’t say it enough. Monitor what your kids are doing on the phone. The way I look at it, this is your phone. These are kids. They don’t own that phone. This is your phone. You pay the bills and pay for the phone, take it away from them. You have every right to do so. They get mad? Call me. I’m going to tell them the same thing!”

One example of a popular app that can easily be used by predators is Snapchat, she reported. The popular photo-sharing app allows users to think images “disappear” after being seen by friends. Turner says that is not the case, that images are available for many weeks, and the app also allows users to see where other users are in real time, gain access to children and ask for photos. Snapchat also includes a section for hidden photos. She pointed out the steps parents would need to do to view such photos.

TikTok and the online game Roblox were also mentioned as means by which predators can make connections with unsuspecting children.

“What I’m seeing, is absolutely ridiculous; it’s heartbreaking,” she shared. “I never would have thought when I became an investigator that I would be seeing what I am seeing today coming out of the elementary schools, the primary schools.”

With human trafficking rivaling drug trafficking, she warned that oftentimes children approached by adults on social media apps are dealing with self-esteem issues which the predators then exploit or are concerned about being rude to an adult.

“They often say, ‘I don’t want to be mean,’” she explained. “To them everyone is a friend, and they don’t want to hurt that person’s feelings when they try to talk to them online.”

Jaco began with noting that while technology can be helpful, in her research she found that a child using a tablet or smartphone too often can lead to serious side effects and actually “lead to changes in brain development and addiction issues.”

Addiction to screens can then lead to behaviors such as crying, breaking things, trouble with regulating emotions and even threats of suicide, she shared.

Short-term effects of too much screen time can show up in insomnia, back pain, weight loss/gain, vision problems, headaches, anxiety, and feelings of guilt and loneliness. Long-term include brain damage and children’s brains have been shown to shrink or show loss of tissue in the frontal lobe where planning, impulse control and compassion and empathy control resides.

Studies show brain damage from excessive internet and video game usage is “remarkably similar to effects of drug and alcohol use,” she further explained.

Jaco then shared tips for parents such as the American Academy of Child and Adolescent Psychiatry’s guidelines for screen time by age bands. She encouraged both conversation and action such as talking to children about what they are seeing and avoiding using screens as pacifiers or babysitters. She suggested turning off screens and removing them from bedrooms 30-60 minutes before bedtime and during family meals or family outings.

Just as parents need to learn about parental controls of apps, she noted that children must also be aware of online privacy and safety.

To encourage children about positive choices, she suggests pointing out good behavior and times of cooperation and promoting sports, music, art, and hobbies that do not involve screens.

Rogers offered a call to action and a cautious reminder in her remarks, “This is the time we need to start fixing the problem, trying to provide services, trying to prevent things from even happening. Don’t be mad at the kids. They are innocent…. We are not doing this to attack kids or blame kids. Even when we deal with kids, we are just talking to them, trying to educate them, and lead them down a better path.”

Benson, who helped coordinate the event, expressed gratitude to Martin Elementary for piloting the experience and to the community groups who helped make it happen.

“We take great measures to keep our students safe at school,” she said. “With all the technology that now exists, we must extend those precautions to when they are beyond our walls and using the internet. We know partnering with parents, caregivers, community groups will strengthen the safety net, and that strength begins with awareness. We look forward to offering similar opportunities in the future.”