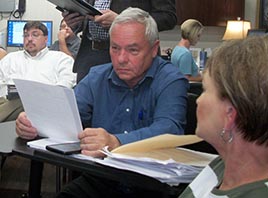 DRESDEN (June 6) — The Dresden Board of Aldermen asked the city’s mayor, Jeff Washburn, for his resignation during the Board’s regular monthly meeting held Monday evening at the McWherter Civic Center.

Alderwoman Sandra Klutts came forward during the last few minutes of the meeting with a resolution censuring Washburn and asking him to resign from his seat, which is up for election in November.

The board voted in favor of the resolution 5-1.

Alderwoman Klutts read a resolution she prepared listing her grievances, which states the following: “Mayor Jeff Washburn had the buildings on the south side of the court square demolished. However, he did not get any signed authorization from the property owners to do that.

“When Mayor Washburn did spend money to hire an architectural firm to produce drawings of a proposed municipal complex before the city had acquired the land to build it on. After he learned that we were not going to acquire one piece of property, he let the firm go ahead and do a second drawing. And, the cost for these drawings was around $80,000. These designs cost the city money that we did not have to spend at that time.” Klutts noted the city may have to spend additional funds for another set of drawings to take into account another property the city may end up with.

“Mayor Washburn has acted in an unprofessional manner on the city’s Facebook Page in such a way that the city board has voted to take the page down. He has responded to certain postings on the site by deleting them or blocking the citizens, and that is illegal on a government Facebook page.

“I’m going to make part of the resolution that the city’s Facebook page be put back up again, and Jennifer Branscum be the administrator and the only person that has the right to post anything on the page. And it be changed back so the citizens can post responses. We would ask them not to post anything in violation of Facebook; but they would have the right to post things they would like to ask about. And they have the right to say what they think about actions we are all taking, regardless of who it is.

“Also, I’ve noticed Mayor Washburn has his personal page called, ‘The Weakley Times.’ I’ve asked in the resolution that he stop posting city information on his page, like tornado information and things like that, and this kind of information be posted on the city’s Facebook page. And, then, if he wants to block citizens on his personal Facebook page, that is fine for him to do so.

“I think Mayor Washburn has shown negligence in areas we should have issued paperwork, and wasteful with the city’s money. I think he has acted in an irresponsible way. Therefore, I propose he be censured, and for the reasons stated above, ask for his resignation,” Klutts said.

Concerning restarting the city’s Facebook page, the Mayor Washburn said, “I am the chief executive officer of this city, and you, as aldermen, do not have the authority to take away the administrative functions of the mayor. That is an issue that will come out in state law, as well as our charter. And, I’m telling you, I do not believe you have the legal authority to cancel any of the administrative functions of the city’s mayor.”

Mayor Washburn said, “You may consider it’s unprofessional, but if they were posting the things about you and your wife or husband on Facebook that they posted against me, and the lies they posted about where I was on the cleanup day, you would be objecting as well.

“In regard of trying to tell me what I can and cannot post on my own Facebook page, you’re going to find out if you try to stop me from doing that, the word after your name will be defendant; because, I will sue each of you individually and as a board to stop that. That is a promise Mrs. Klutts, and if you come to some of the meetings of this board, you will probably hear some of these things and be able to understand what’s going on.”

Klutts replied, “When I’m not here, I get the minutes.”

“But you’re not here for the discussions, hearing each and every word that is stated,” the mayor replied. “That is part of the problem. You sit around and listen to the drama queens and hear what they want to do, and then, you come and want to be their official representative on this board. And that is a big problem.”

Alderwoman Klutts made a motion to approve the resolution, which received a second by Alderman Dilday, and passed 5 to 1. Those voting in favor of the motion were: alderpersons – Gwin Anderson, Ralph Cobb, Lyndal Dilday, Sandra Klutts and Willie Parker. However, Alderman Kenneth Moore voiced a resounding “No” vote.

In response to the vote, Mayor Washburn said, “I’ll do what I need to do.”

Monday night’s Dresden City Board meeting may be viewed in its entirety on the Dresden Enterprise’s Facebook page.

Washburn announced to Thunderbolt Broadcasting on Tuesday morning he did not plan to resign and will pick up a petition to seek the mayoral position for a third term.

Alderman Gwin Anderson stated he received an email from a citizen this week, insinuating the Dresden Police Department had been used in intimidating ways by parking a police vehicle in front of her house and following a reporter around. Police Chief Chris Crocker said, “I know nothing about the reporter incident.

“The other incident you were speaking of is on Facebook. I was just notified of that earlier when I was in the gym. I addressed that person on Facebook myself. A photo of one of my officers that was placed on there was one of my officers on a parking lot, while they were trying to serve an arrest warrant on someone. The officers were thinking he was going to leave on a motorcycle, and that’s why they were sitting there.

“The other issue on Facebook really makes no sense, and I don’t want to waste my time speaking about it. I mean, to think a uniformed officer would raise a hood on someone’s car and cut a wire, that’s just unheard of. We have more important things going on inside the city besides tracking people down or harassing people.”

Mayor Washburn said, “I can speak to that. I have not spoken with the police chief or any other police officer and asked them to track or follow or harass anybody. The person who made the Facebook post said that I did, and it’s a complete lie.”

At this point, Dresden resident April Lieberman spoke out, before the floor was open for input from local citizens (as stipulated in the agenda), and the mayor informed her that she was out of order.

Lieberman said, “The person who put the Facebook posts on didn’t say that you did that. The person said that she challenged your unconstitutional behavior.”

Mayor Washburn restated that she was out of order.

“I have just been called a liar by the mayor of my town, and I ask this board for the opportunity to respond,” Lieberman said.

Alderman Lyndal Dilday pointed out that the citizens input portion of the meeting comes before the department reports, so as soon as department heads finished giving their reports and answering questions from the board, the floor was then open for public discussion.

Lieberman addressed the mayor saying that she reported the situation to the ACLU and the FBI and plans on contacting the Attorney General and Tennessee Bar Association. She claimed the mayor was denying the citizens of the community their free speech and First Amendment rights, and argued his actions are a violation of constitutional law.

Mayor Washburn informed Lieberman that what he does with his personal Facebook page is his business.

She stated blocking citizens from making comments on his or the city’s Facebook page is illegal.

In response to Mayor Washburn, who is an attorney, and Lieberman, who says she attended law school, were arguing back and forth and talking over one another. Alderman Gwin Anderson asked that one person speak at a time, so their remarks could be understood.

In one of Lieberman’s Facebook posts, she states, “personal and private accounts are inappropriate for governmental communications in that they skirt official record-keeping requirements and Freedom of Information requests.”

Mayor Washburn responded to Lieberman’s assertion that he violated any laws saying, “I can tell you the ‘The Weakley Times’ is my personal outlet on Facebook, and I do not have to allow you to come on there and bash me and tell false information.” He stated this is his personal webpage, which has nothing to do with the City of Dresden. The mayor said, “I get out and I go around and take pictures of businesses. I report things that are going on. I report the news of this city, just like the Weakley County Press and the Dresden Enterprise. There’s not one bit of difference between the three of us. So, I am an independent reporter (who’s) reporting. So, whether you like it or not, I’m going to continue to do that. And I don’t care if the ACLU comes in here – the FBI, the TBI, the Comptroller’s Office, or the Tennessee Bar Association. They’re going to tell you the same thing – that you’re full of crap and you don’t have a clue what you’re talking about.”

He said, “This is not Mayor Jeff Washburn’s page. This is a page where I (as a private citizen) report all kinds of news, including beauty reviews, football games, basketball games and everything else.”

Once again, Lieberman said, “You conduct city business through your personal account, and are therefore subject to the same restrictions ….”

Lieberman said, “You have no idea what you’re talking about.”

Next, Melinda Pritchett, who is not a resident of Dresden city limits, but has a Dresden address, gave the board a copy of a FEMA manual. She mentioned the board could ask a FEMA official she knows of to come and speak concerning FEMA regulations.

Mayor Washburn informed Pritchett, “We meet with a high-ranking FEMA official almost every week. Most everybody that’s met with us, including a couple of aldermen, know what’s happening at those meetings.”

At the conclusion of the meeting, Alderman Anderson requested that a MTAS representative be invited to an upcoming meeting to discuss items in the City Charter that need to be addressed, including things involving the city’s court system, or anything that is outdated or otherwise needs to be updated.